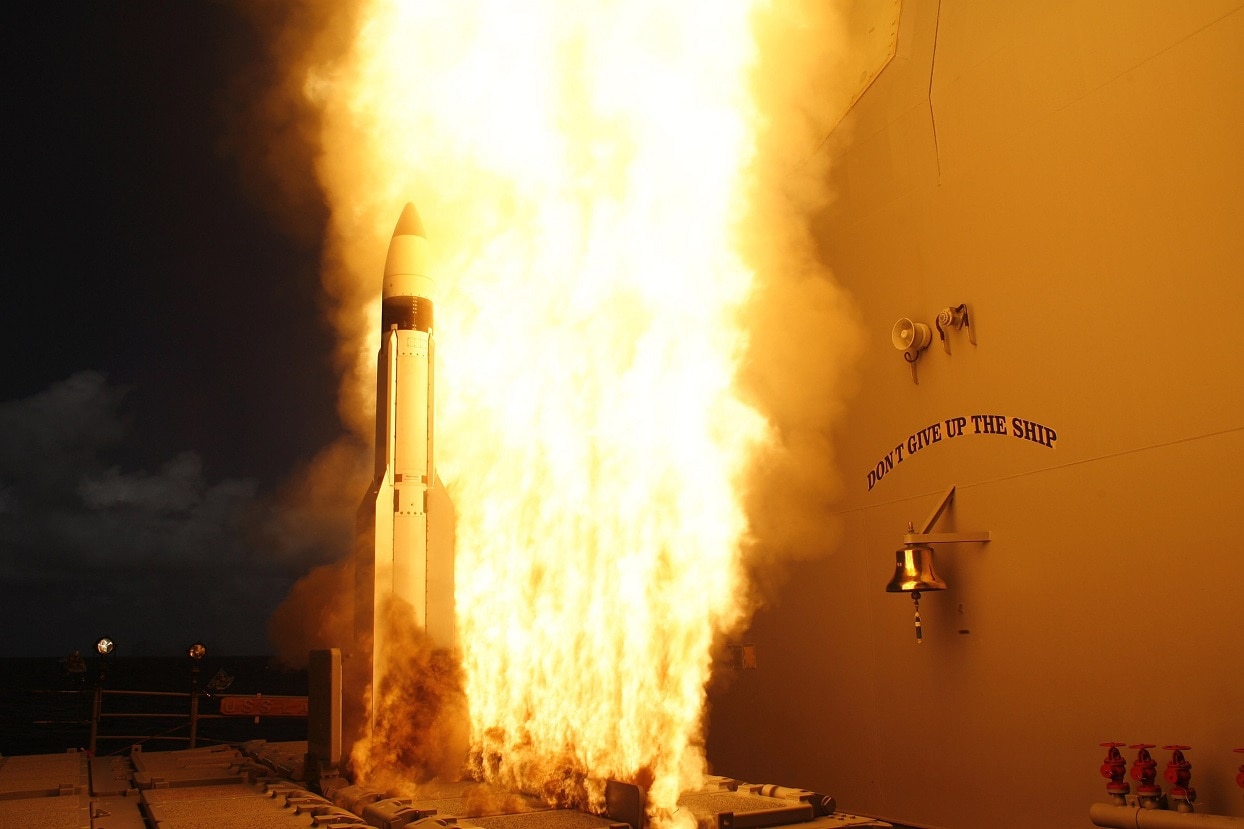 The U.S. Navy’s new operational approach to winning a high-end fight with a peer competitor is called Distributed Maritime Operations (DMO). The essence of DMO is found in three core tenets: making U.S. forces (particularly naval platforms but also land-based forces) hard to find, hard to kill, and highly lethal. One critical new capability that will contribute significantly to the implementation of all three tenets is Raytheon’s new SPY-6 family of radars. Designed from its inception to be a modular system, the four variants of the SPY-6 will be deployed on multiple ship classes. Together with the older but highly capable SPY-1, plus advanced airborne and land-based radars, the SPY-6 family will make it possible for U.S. naval forces to conduct distributed sensing across vast swathes of the Earth, DMO’s most critical requirement.

To implement DMO, the U.S. Navy must be able to spread platforms over a wide area while integrating their sensors to develop a robust, complete picture of the battlespace. The Navy has demonstrated a Network Cooperative Radar (NCR) capability, enabling dispersed platforms to share radar information that will improve the ability of individual platforms. This will allow platforms to detect, track, and engage hostile targets. According to a Raytheon expert:

“One of the principal benefits of distributed sensing is the ability of forces in various parts of the battlespace to share their tactical data, creating a more complete shared picture. NCR-enabled sensors will have a substantially improved collective capability to see through operational factors that might mask an adversary unit; where one ship might not see a contact, a ship in a different part of the battlespace might be well-[positioned] to track the contact and then share that information with the rest of the force.”

For decades, the SPY-1 radar and the Aegis Combat System, along with the Standard Missile (SM) family of interceptors, have been the heart of the U.S. Navy’s air and missile defense capability. In 2013, a heavily modified version of the SM-3, using data from a SPY-1 radar, shot down a defunct satellite in an uncontrolled return to Earth. The SPY-1 and the SM family are deployed on some 85 U.S. cruisers and destroyers, as well as on land as part of the Aegis Ashore system in Poland and Romania.

The new SPY-6 radar provides a dramatic improvement in radar performance. It has greater power and resolution than the SPY-1 resulting in increased detection range, a capability to detect and track a wider range of targets in larger numbers, and improved performance in degraded environments.

But the real genius of the SPY-6 radar is that it was designed from its inception to be modular. Different combinations of radar module assemblies (RMAs) allow different variants of this advanced radar to be deployed on multiple ship classes. For example, Variant 1 of the  SPY-6 (V)1 is being deployed on the new Flight III Arleigh Burke-class destroyers. It has four flat antenna faces, each with 37 radar module assemblies. The current budget proposal for a new multi-year procurement of 15 Flight III Arleigh Burkes will add a substantial number of SPY-6 (V)1s to the Fleet. A smaller version of this radar, Variant 4, with four fixed faces and a total of 24 RMAs, will be back fitted on some Flight IIA Arleigh Burke-class destroyers.

Two other variants numbered 2 and 3, also called Enterprise Air Surveillance Radars (EASR), will be deployed on a variety of other platforms. Variant 2 will have a single rotating face with nine RMAs. It will equip older Nimitz-class aircraft carriers, America and Wasp-class large deck amphibious warfare ships, and the LPD 17 San Antonio-class amphibious transports. Variant 3 has three fixed faces, each with nine RMAs. It will be installed on the new Ford-class carriers and Constellation-class guided missile frigates. The EASR is a significant improvement over existing radars, providing both anti-air and anti-surface target detection and tracking, air traffic control, and electronic warfare.

A critical aspect of the Navy’s success in exploiting the inherent capabilities of the SPY-6 is its integration with the latest iteration of Lockheed Martin’s AEGIS combat system, Baseline 10. Together, SPY-6 and AEGIS Baseline 10 enable engagement of a larger number of incoming aircraft and missiles; engagements over a significantly larger operating area; improved discrimination capability against ballistic missile threats; enhanced mission planning to optimize air and missile engagements; and improved performance in the presence of clutter and radar countermeasures.

The proliferation of SPY-6 radars across well over 100 naval platforms is going to be key to the Navy’s ability to conduct DMO. To that end, Raytheon and the Office of Naval Research are working on software to integrate naval radars, particularly the SPY-6 family, to provide integrated, overlapping coverage of a given geographic area.

The SPY-6 program is moving forward. Despite the challenges posed by the pandemic and supply chain issues, Raytheon is providing radar sets on time and on budget. Currently, there are 42 radar sets on order.

Sensing is the most vital element of DMO. In addition to using the SPY-6 family to create a distributed sensor network, the Pentagon and industry are working together to connect the full range of available sensors and weapons. In the recently held biennial Valiant Shield exercise in the Indo-Pacific, a Patriot missile successfully engaged an airborne target based on information provided by an F-35.

Almost as important as networking distributed sensors is aggregating, processing, and exploiting the data. Just prior to this year’s Valiant Shield, Raytheon demonstrated a new capability to link disparate assets using machine-to-machine communications involving ground, airborne and space-based nodes. This kind of connectivity will be critical to the successful operation of the Navy’s DMO concept, as well as to Joint All-Domain Command and Control.