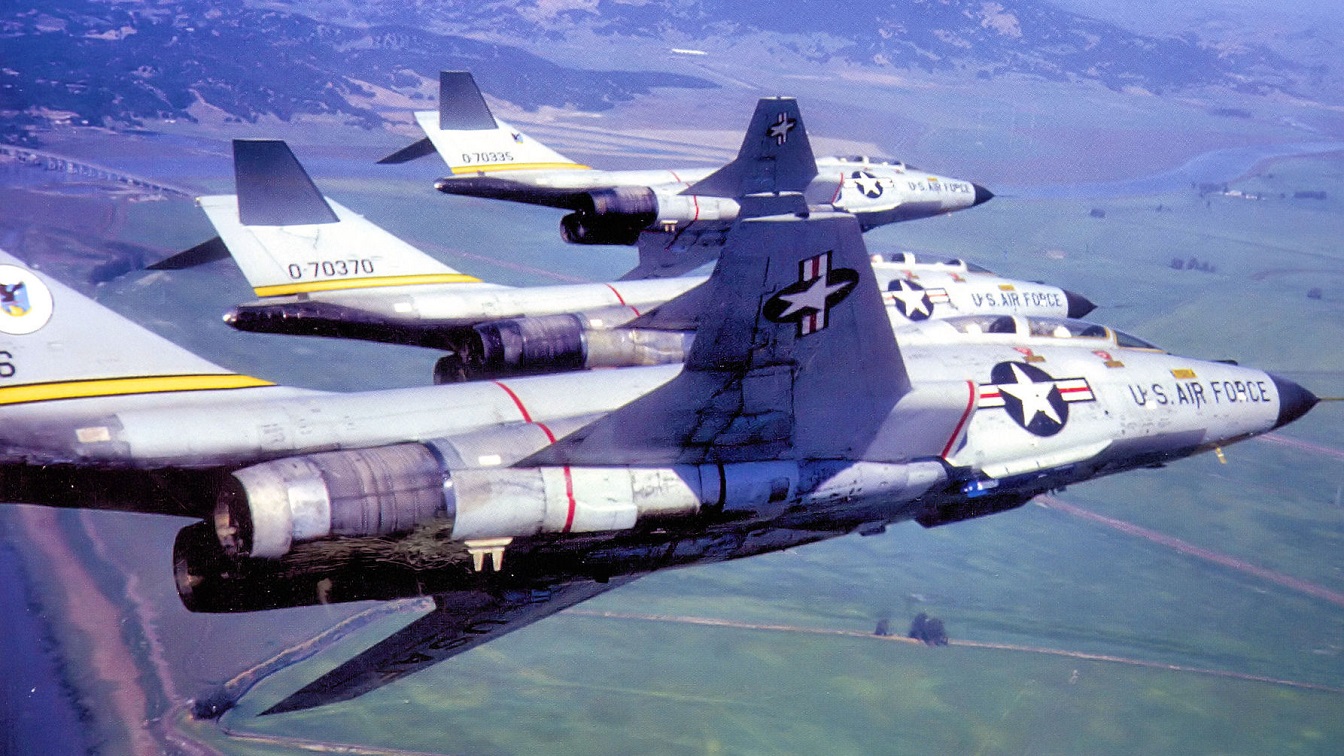 “Don’t give me McDonnell’s Voodoo./There’s nothing that she will not do./She’ll really pitch up, she’ll make you throw up,/Don’t give me McDonnell’s Voodoo.” Thus goeth one of the many verses of the humorous U.S. Air Force fighters pilots’ ditty “Give Me Operations,” a song popularized by folk singers such as Oscar Brand — the “Dean of American Folk Music” — and Lt. Col. (USAF, Ret.) Dick Jonas — the “fighter pilot’s minstrel.” The Voodoo in question here is not the actual religious practice but rather the McDonnell (later McDonnell Douglas) F-101 Voodoo supersonic jet fighter. Let’s now take a closer look at this Voodoo plane that cast its spell (so to speak) on the U.S. Air Force (USAF), the Republic of China Air Force (ROCAF), and the Royal Canadian Air Force (RCAF) alike.

The F-101 Voodoo made her maiden flight on 29 September 1954 and then officially entered into operational service with the USAF in May 1957, followed by the Taiwanese Air Force and the RCAF in 1961. She was originally intended to be a so-called “penetration fighter” for Strategic Air Command (SAC) but instead ended up being developed as a nuclear-armed fighter-bomber for Tactical Air Command (TAC) and a photo reconnaissance aircraft. It was in the latter role where she arguably made her biggest historical impact (more on this in a bit).

Less than a month later, there was Operation Firewall, during which an F-101A set a new absolute world speed record of 1,207.6 mph (1943.4 kph) over the Mojave Desert in California. Accordingly, the Voodoo drivers lovingly nicknamed their aircraft “One-oh-Wonder.”

Voodoos vs. the Communists

As impressive as those accomplishments were — flown within the friendly confines of American airspace — it was over the not-so-friendly skies of Communist countries’ airspaces that the F-101 Voodoo variants made their most important contributions.

For starters, there were secretive missions carried out by Taiwan against Chairman Mao’s Red China. As noted by the Federation of American Scientists’ (FAS) information page on the RF-101C variant, “Four Voodoos were delivered to Taiwan in 1959 under Project Boom-Town. The aircraft, flown by CNAF [sic] pilots, allegedly conducted reconnaissance missions over international waters off the coastline of the Chinese mainland, but, in fact, penetrated deeply into the Chinese airspace. The first Voodoo was shot down in August 1961; in less than four years three others were downed. The US Air Force transferred another four aircraft to cover these losses. RF-101s operated successfully over mainland China for several years before operational attrition ended their careers.”

During the Vietnam War, the Voodoo was never used as a fighter against North Vietnamese MiGs, though the warbird did serve as the basis of the highly successful F-4 Phantom II. That’s not to say the F-101 didn’t still serve in Vietnam, as the RF-101C ended up flying 35,000 reconnaissance sorties against the minions of “Uncle Ho;” 33 of the planes were lost in combat, with only one of those being shot down by an enemy aircraft (a MiG-21 Fishbed in September 1967).

Jumping backward a bit in terms of chronological narrative, we get back to where I consider the Voodoo’s aforementioned “biggest historical impact” to have taken place: the Cuban Missile Crisis. That 363rd Tactical Reconnaissance Wing would make history again; via its low-altitude photo recon missions. The missions helped identify and track activities at Cuban missile sites, airfields, and port facilities, thus helping confirm that offensive missile sites in Cuba were being dismantled. One of these daring RF-101 pilots claimed he flew so low that a Soviet technician almost hit his Voodoo with a volleyball. The much-deserved Air Force Outstanding Unit Award (AFOUA) was presented by JFK himself, who told the aviators that “You gentlemen have contributed as much to the security of the United States as any group of men in our history.”

A total of 807 F-101s were built. They were retired by the active-duty USAF, U.S. Air National Guard (ANG), and RCAF in 1972, 1982, and 1984 respectively. A goodly number of them are preserved in aviation museums today, with the most famous example being the participant in Operation Sun Run, which is now housed at the National Museum of the United States Air Force at Wright-Patterson AFB near Dayton, Ohio.