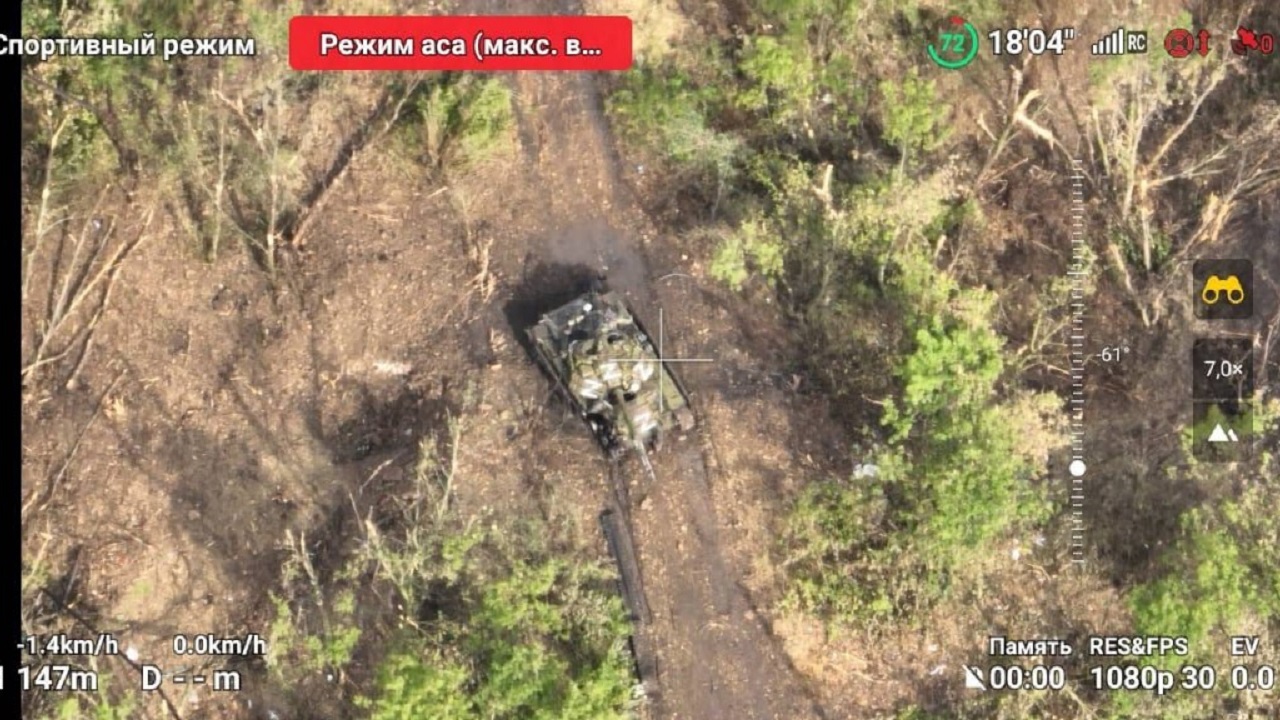 A T-64BV tank belonging to the DNR/LNR Russian forces was detracked and abandoned after running over an anti-tank mine placed by the Ukrainian forces in the East.

T-64 tanks have seen use on both sides during Russia’s invasion of Ukraine. These tanks have a history going back to the first decades of the Cold War. For their part, the Ukrainian Armed Forces have come to rely on their own, domestically developed variants of the T-64, and these tanks have also seen frontline service in the war.

In its default configuration, the T-64’s main weapon is a 125mm gun. This is fed by an autoloader that allows the tank to fire five to eight rounds per minute. It is additionally armed with a 7.62mm PKT machine gun and one 12.7mm DShKI machine gun. The tank is propelled by a five-cylinder, 700-to-750-horsepower diesel engine that gives the T-64 a maximum speed of more than 40 miles per hour.

Development of the T-64 began in 1955, and the tank first entered serial production in 1963. The T-64 is closely related to the T-72, which was designed to be its successor.  Elements of the T-64’s design were incorporated into the T-72 as well as the T-90. The T-64 was produced until 1981 and deployed to some of the highest-priority sectors on the frontier of the Iron Curtain.

Modernization of the T-64

Following the collapse of the Soviet Union, Ukraine was left with a variety of legacy tanks, including T-64s. Instead of acquiring new tanks from Russia, Ukraine embarked on a modernization program of its existing tanks to extend their service life. In 2005, the T-64BM Bulat first entered service. It featured upgrades to its optics and was enhanced with Ukraine’s domestically produced Nozh explosive reactive armor, as well as a new fire-control system. In part because of the armor, the tank was too heavy for the Bulat’s engine to handle during combat situations in the Donbas. The Bulat was put in reserve in 2017 in order to focus on the T-64BV, which first entered service that same year.

Initial modernizations of the T-64BV included many of the Bulat’s upgrades, including the Nozh explosive reactive armor system. It added some improvements of its own, such as tweaks to the engine for enhanced performance and longevity. Ukrainian engineers did not leave the Bulat behind for too long, however. In 2020, the Kharkiv Armored Plant received an order to modernize old T-62s to the Bulat standard, which likely included upgrades to the tank’s engines. According to Ukraine’s Ministry of Defense, T-64BVs were being modernized by the Kharkiv Armored Plant right up until Russia’s invasion.

Following Russia’s February 2022 invasion of Ukraine, Kyiv’s growing reliance on the T-64 was put to the test. In the opening days of the war, Ukraine’s 1st Tank Brigade, which is equipped with T-64s, reportedly helped hold back Russia’s siege of Chernihiv in the first months of the invasion. More recently, Ukrainian T-64s affiliated with the 17th Tank Brigade are likely occupying positions on the Inhulets River near the city of Kherson, where Ukrainian forces have been teetering on the edge of a rumored counteroffensive for weeks. According to the open-source intelligence blog Oryx, the T-64 has suffered the bulk of Ukraine’s tank losses overall, with at least 167 confirmed to be destroyed so far. The T-64s lost have been a mixture of Ukrainian and Soviet-legacy variants.

While losses of the T-64 may be large in absolute terms, this can also be viewed as emblematic of the cornerstone role the tank plays in Ukraine’s Armed Forces. Unless Ukraine receives large amounts of Western tanks in the future, the T-64 will likely remain a staple of Ukraine’s armor for some time to come.