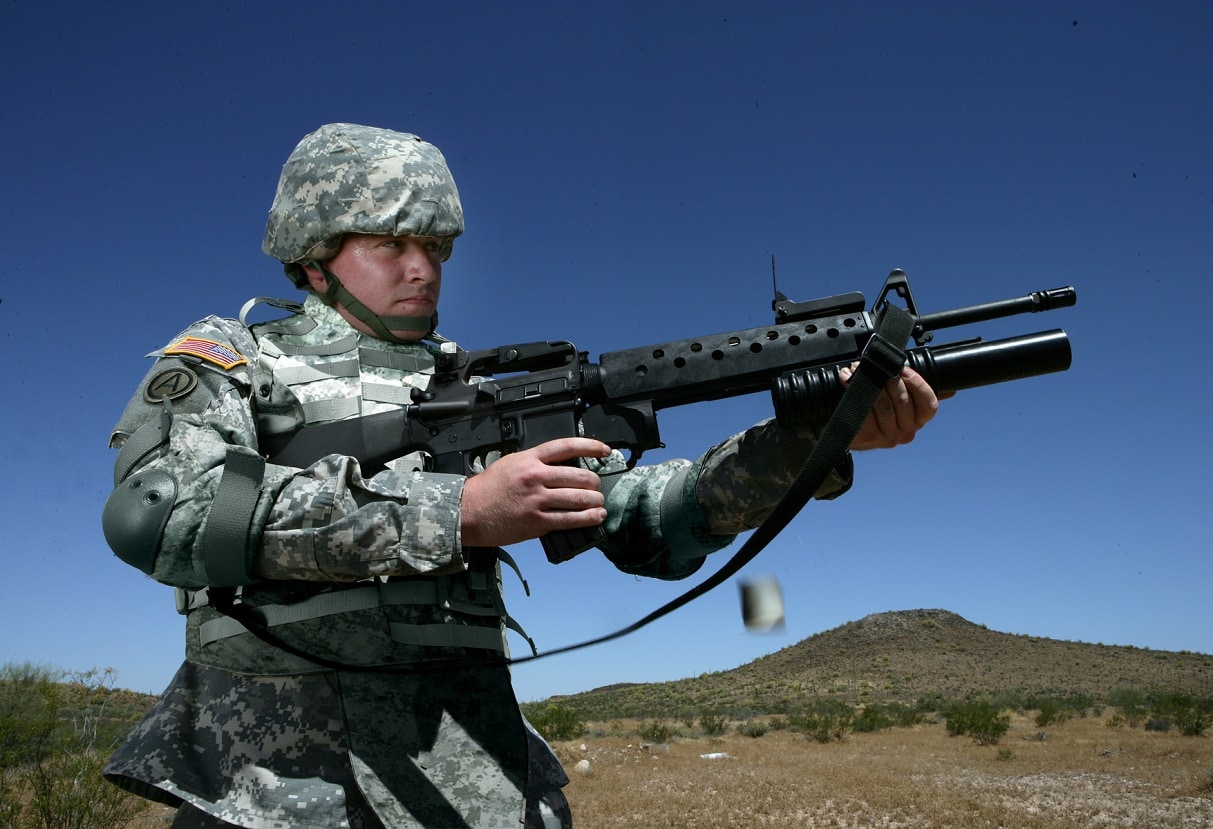 Earlier this week on 19FortyFive, we published a story on the XM25 25x40mm grenade launcher aka the “Punisher,” an ill-fated joint venture between Heckler & Koch (HK) and Orbital ATK that was meant as a replacement for the U.S. Armed Forces’ longstanding M203 40mm single-shot pump-action grenade launcher. The Punisher combined semiautomatic function with so-called “smart grenades,” which sounded like a fabulous combo in theory but proved woefully wanting in practice. However, the U.S. Army hasn’t given up leading the (proverbial) charge on seeking a 21st-century man-portable grenade launcher, hence the successor to the XM25: the  “Precision Grenadier System” (PGS).

A key difference between the XM25 and the PGS is that “this time the U.S. Army will solicit more soldier feedback,” according to Scott Gourley of Shephard Media. A prime example of this is the fact that 14.5 pounds will be the threshold weight for the weapon, fire control, and batteries combined. This will be a welcome contrast to the 14-lb empty weight of the Punisher and 35-lb total package — literally punishing to the soldier’s back and shoulders!

The new weapon will also have a day/night/thermal spectrum sight for 24/7 targeting capabilities, a day-capable laser in order to enable the soldier to boresight the system out to 100 meters, and a coded laser pointer capability to ranges of 600 meters at low power and 2,000 meters when using high power. In addition, the Army wants a weapon capable of engaging enemy positions just beyond a hand grenade range of 35 meters out to 500 meters.

As Lt. Col. Christopher Kennedy, chief of the Lethality Branch at Fort Benning, told defense industry officials back in November 2020 at the Maneuver Capabilities Development and Integration Directorate’s Industry Day, “Really, the sweet spot is in that 300-meter range band – being able to affect the enemy and engage him in defilade. And we are looking to do that in less than 15 seconds.”

However, LTC Kennedy was mum about other specifics, such as caliber: “I don’t have a caliber; you guys are going to come up with the caliber. Industry is going to come back and tell me … ‘Here’s what I’ve got.'”

The U.S. Government plans to make PGS a formal program of record in Fiscal Year 2024, unless it becomes a Cross-Functional Team (CFT) priority prior to FY24.

Meanwhile, until the PGS finally gets up and running, there’s another improvement upon the M203 that’s already been in service since 2009, although granted it’s still a single-shot like its 40something-year-old predecessor: the M320. As described by Samantha Franco in War History Online:

“The physical design of the M320 resembles that of an Uzi submachine gun but is more compact in size and shape. It’s much more versatile than the M203 and the M79, as it doesn’t favor being employed as a standalone weapon or mounted onto another – it can work effectively as both…The M320 grenade launcher boasts major improvements. To begin with, it’s been upgraded to a side-loading mechanism, which makes the breach clearly visible and thus makes loading a lot easier; the barrel on the M320 swings out for loading, instead of the forward-sliding ‘pump’ barrel that the M203 used … A notable difference between the M320 and the M203 are the weapons’ sights. The M203s were attached separately and were inconvenient in that they had to be re-zeroed every time they were used. The M320’s sights are more advanced, located on the side of the unit, and can be used with a laser rangefinder that allows for use at night.“

That laser rangefinder is one bit of commonality with the XM25 and the PGS alike. Time will tell if the PGS ends up supplanting the M320 or merely supplementing it.