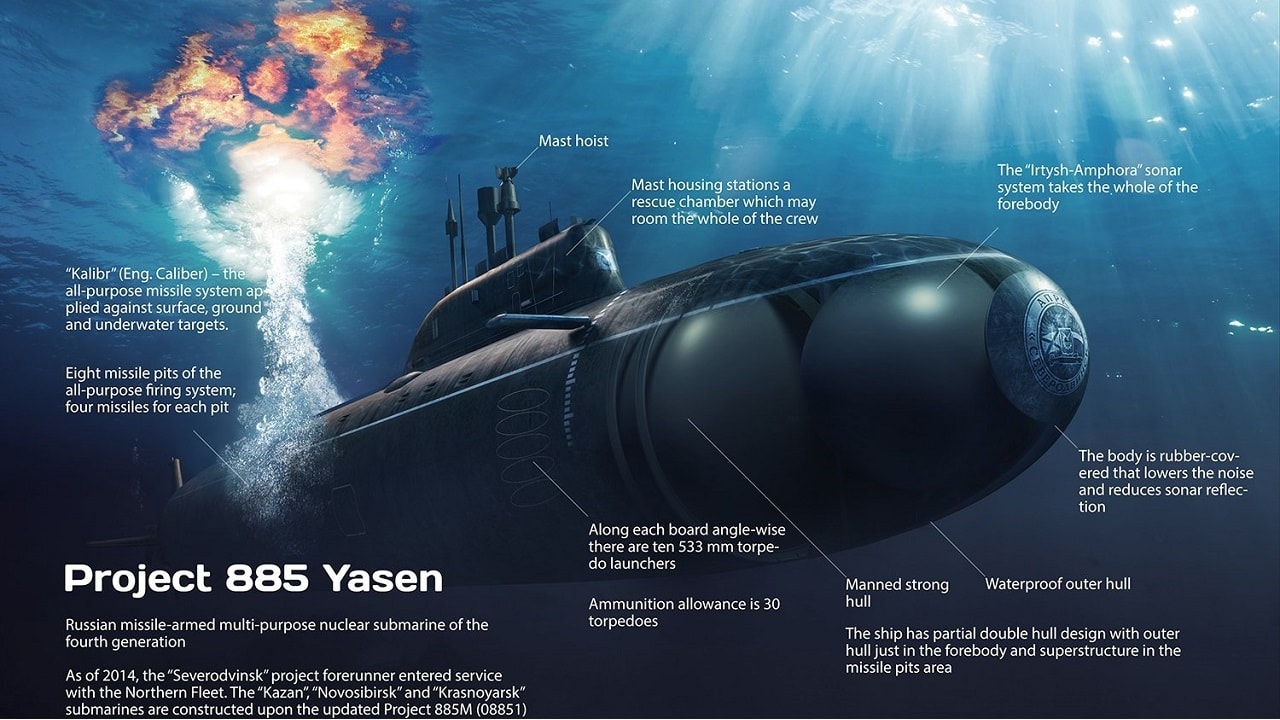 The Russian military is clearly having some serious problems with its war in Ukraine. Nonetheless, Putin seems sure to keep building more advanced weapons ever in all domains – especially under the sea:

The Russian navy lacks dependable aircraft carriers. It makes up for this grave disadvantage with a diverse and robust submarine force. Now the Russians have a sub that might soon launch nuclear-tipped torpedoes while equipping the most modern missiles available to a submarine.

The nuclear-powered K-329 Belgorod is an Oscar II-class guided-missile fast attack boat. The submarine was introduced into full-time service with the Russian fleet at a public event at the Sevmash shipyard in Severodvinsk on July 8.

Russia planned the Belgorod to feast on American and NATO shipping – especially aircraft carriers. The new submarine is assigned to the innocuous sounding Main Directorate of Deep Sea Research, and the Russian navy said it will conduct underwater scientific experiments.

Don’t let that fool you. This boat is highly dangerous. The weapon American naval strategists fear most is the planned Poseidon nuclear-armed and nuclear-powered torpedo, which functions as an underwater combat drone with seemingly unlimited range. There are plans for six Poseidons to be onboard the Belgorod.

Russian television news programs, generally recognized as wretched hives of blustery propaganda, claim the Poseidon could “wipe Britain off the map … in a radioactive tsunami.” The doomsday weapon is 80 feet long and can speed along at 108 knots, while reaching as deep as 3,200 feet. The autonomous underwater drone could create up to a two-megaton blast.

Thankfully, the Poseidon is still a few years away from deployment. But it could indeed be capable of destroying coastal cities in Britain, the United States, or other NATO member-states. There is nothing in adversaries’ arsenals that could stop such a nuclear torpedo. Maritime Executive magazine said a nuclear device detonated by the torpedo would be devastating: “The real objective would be to coat wide swathes of the surrounding coastline with radioactive fallout – an enduring and difficult-to-remediate hazard of underwater nuclear detonations. The submersible delivery method would circumvent (American) missile-defense capabilities.”

The Belgorod has another intriguing and worrying feature. The sub can serve as a quarterback of sorts for a small, nuclear-powered spy submarine that would allow the craft’s sailors to work on or even sabotage undersea Internet cables, as well as other objects on the seafloor. Other sources indicate that the sub can be used as a “carrier” for autonomous underwater vehicles, a big deal if accurate.

However, this program might be on hold due to a past tragedy – the Russians have tried the mini-sub concept before. The Losharik (A-12) was “a deep diving manned submersible that suffered a battery explosion in 2019 that killed 14 Russian submariners,” according to USNI News.

The Belgorod is the biggest submarine the Russians have built in 30 years. It is 549 feet long and 49 feet across, has two nuclear reactors, and displaces 24,000 tons. It has been undergoing sea trials since 2019.

What Should We Believe?

All of this news is difficult to parse. I believe the submarine is ready to embark on patrols. The nuclear torpedo sounds optimistic, but U.S. Navy leadership has testified on Capitol Hill that it could be a reality someday. Adm. John Aquilino, the commander of Indo-Pacific Command, disclosed in House testimony in May that the Belgorod would be equipped with the Poseidon. Until it is ready, the nuclear-equipped drone serves as useful propaganda.

As for the midget sub destroying undersea Internet cables – that seems far-fetched. This is another shiny object for hawks in Russia to squawk about on television newscasts. I grade the whole package a seven out of ten, because it rests on unproven technology. As we get more information on the development of the Poseidon, that grade might rise. Let’s hope U.S. Navy intelligence keeps a close eye on that nuclear-tipped and nuclear-powered doomsday torpedo.

The image above is of a Yasen-class Russian Submarine.