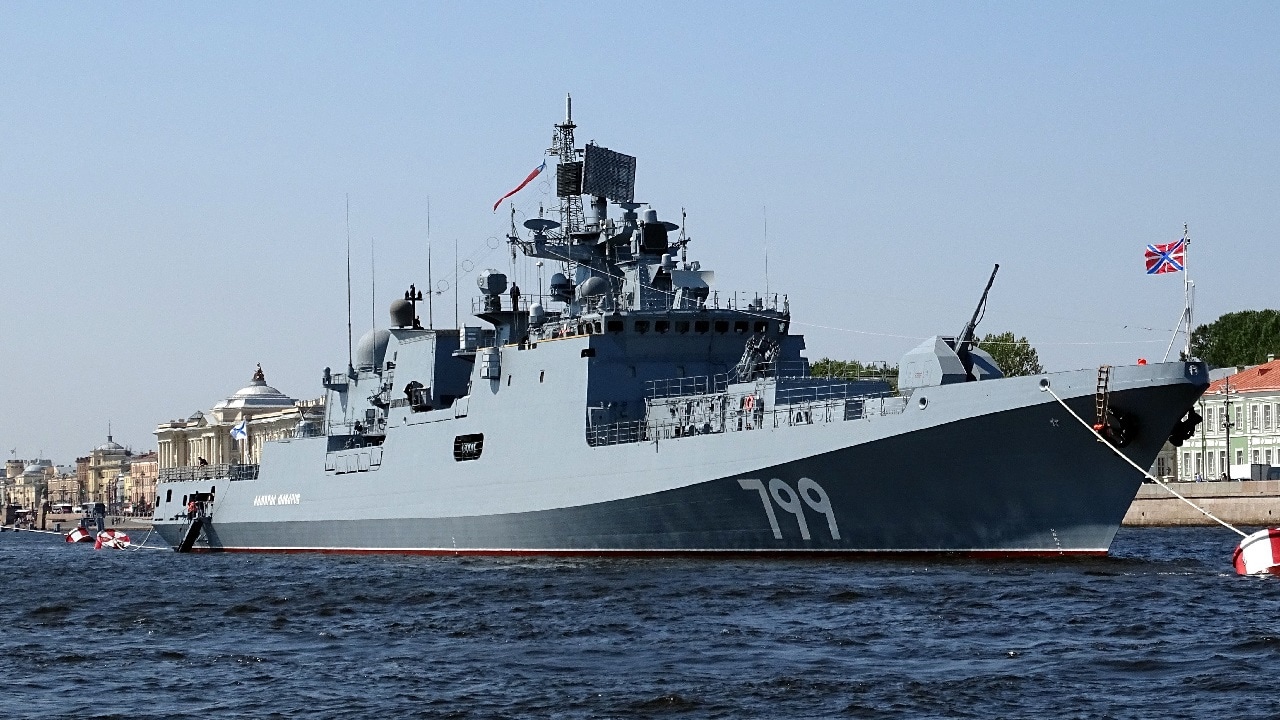 The frigate Admiral Makarov of the Russian Baltic Fleet anchored at Saint Petersburg.

Russia’s Admiral Grigorovich Class frigates, which are some of the newest in the Russian Navy today, have taken an active role in the Black Sea Fleet’s support for Moscow’s 2022 invasion of Ukraine.

History of the Admiral Grigorovich Class

Constructed in the Yantar Shipyard in Kaliningrad and designed by the Severnoe Design Bureau in Saint Petersburg, the Admiral Grigorovich, which is the first example of the Admiral Grigorovich Class to be built, was laid down in 2010 and launched in 2014. The Admiral Essen and Admiral Makarov, the second and third examples of the class, were laid down in 2011 and 2012 and launched in 2014 and 2015 respectively. Russia initially had ordered six examples of the Admiral Grigorovich Class, but following Russia’s 2014 seizure of Crimea and invasion of eastern Ukraine, Kyiv’s state-owned gas turbine company Zorya-Mashproekt refused to supply critical elements of the ship’s propulsion system to Russia for the warships. Instead, Russia opted to sell off the three uncompleted vessels to India, who would directly purchase the necessary engines directly from Ukraine to be installed on the vessels.

What is the Admiral Grigorovich Class?

Service History of the Admiral Grigorovich

Following their introduction to the Russian fleet, Russia’s three Admiral Grigorovich-class frigates saw their first deployment as part of Russia’s intervention in the Syrian Civil War in support of Syrian dictator Bashar al-Assad. As part of the intervention, the Admiral Grigorovich and the Admiral Essen both fired Kalibr cruise missiles at targets in Syria. The Admiral Makarov also joined the fleet operating in the eastern Mediterranean, where it was intended to remain on “standby” along with a larger flotilla.

However, participation in Russia’s 2022 invasion of Ukraine has been the highest-intensity combat ships of the class have been involved in. Ships of the class appear to be taking part in a wider sea-based bombardment of targets within Ukraine with Kalibr cruise missiles that has become one of the most internationally infamous elements of Russia’s invasion. Following the Ukrainian sinking of the previous flagship of Russia’s Black Sea Fleet, the Moskva, the Admiral Makarov was possibly named as the new flagship. Rumors swirled in May that the Admiral Makarov had itself been struck by Ukrainian missiles and heavily damaged or even sunk. However, these claims turned out to be false, and no further information has emerged with suggests that the ship has been taken out of action.