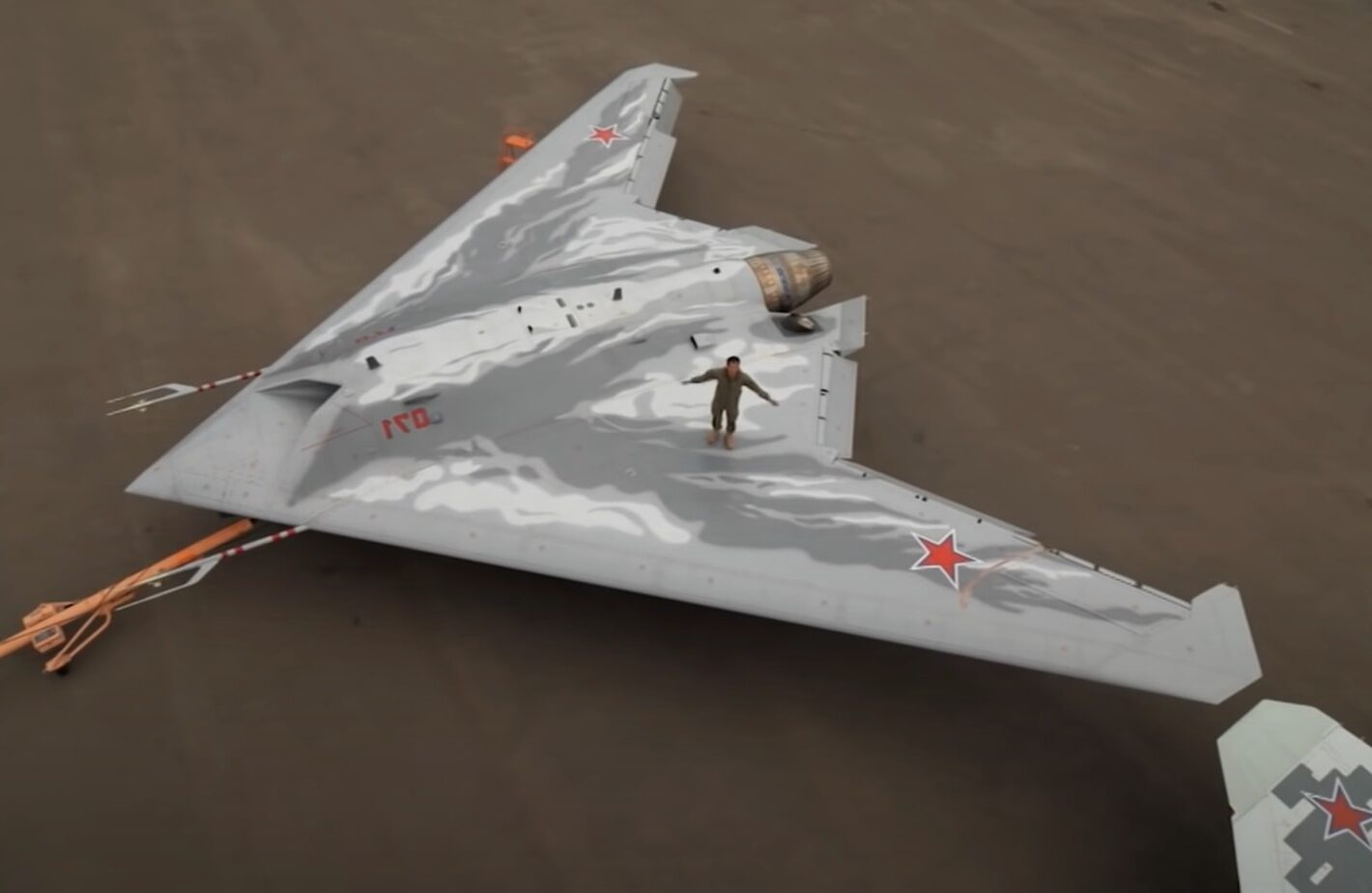 Military Expert Peter Suciu Provides An Update on the S-70 Okhotnik-B Drone: Multiple nations worldwide are now developing drones, which could be a force multiplier for manned aircraft. The United States leads these efforts, but Russia has been scrambling to play catch up. Its Sukhoi S-70 Okhotnik-B is currently being developed as part of a sixth-generation aircraft project at Sukhoi and the Russian Aircraft Corporation MiG. Based on the earlier Mikoyan Skat, it reportedly encompasses some technologies of Russia’s fifth-generation Sukhoi Su-57 fighter jet.

The flying wing design suggests a competent unmanned aerial system (UAS) that could serve as a loyal wingman to the fighter jet or take on an independent combat role. It incorporates the use of composite materials and stealth coatings to make the aircraft low-observable in flight.

This is no small drone, however, and it has a weight of some 20 tons, along with a wingspan of around 65 feet (20 meters).

The S-70 Okhotnik-B is reported to be powered by either a single AL-31F turbofan – the same used on the Sukhoi Su-27 fighter – or via the improved AL-41F derivative, that is installed on the Su-35S fighters and Su-57 prototype aircraft. It has a total operational range of 6,000 km and a combat range of 4,000 km. The UAS further features two internal weapons bays that can carry up to 2,000 kg of guided and unguided munitions.

Though it looks menacing, those looks are likely deceiving.

In theory, the Okhotnik – which means “Hunter” in Russian – is in the same class of drones as the Dassault nEUROn and Boeing Loyal Wingman, which are now being developed to act to augment the capabilities of manned aircraft, notably fifth-generation stealth fighters. Such drones could also significantly extend the sensor and weapons range of manned aircraft.

Flying High or Not?

At issue with the Okhotnik-B is whether Moscow will have the resources to actually continue its development and produce the drone in significant numbers. The S-70 only conducted its debut flight on August 3, 2019, which lasted slightly more than 20 minutes under an operator’s control.

On September 27, 2019, the drone took part in a second test flight that lasted more than 30 minutes, where the drone accompanied a Sukhoi Su-57 fifth-generation fighter jet. During that particular flight, the drone maneuvered in the air in automated mode at an altitude of around 1,600 meters. 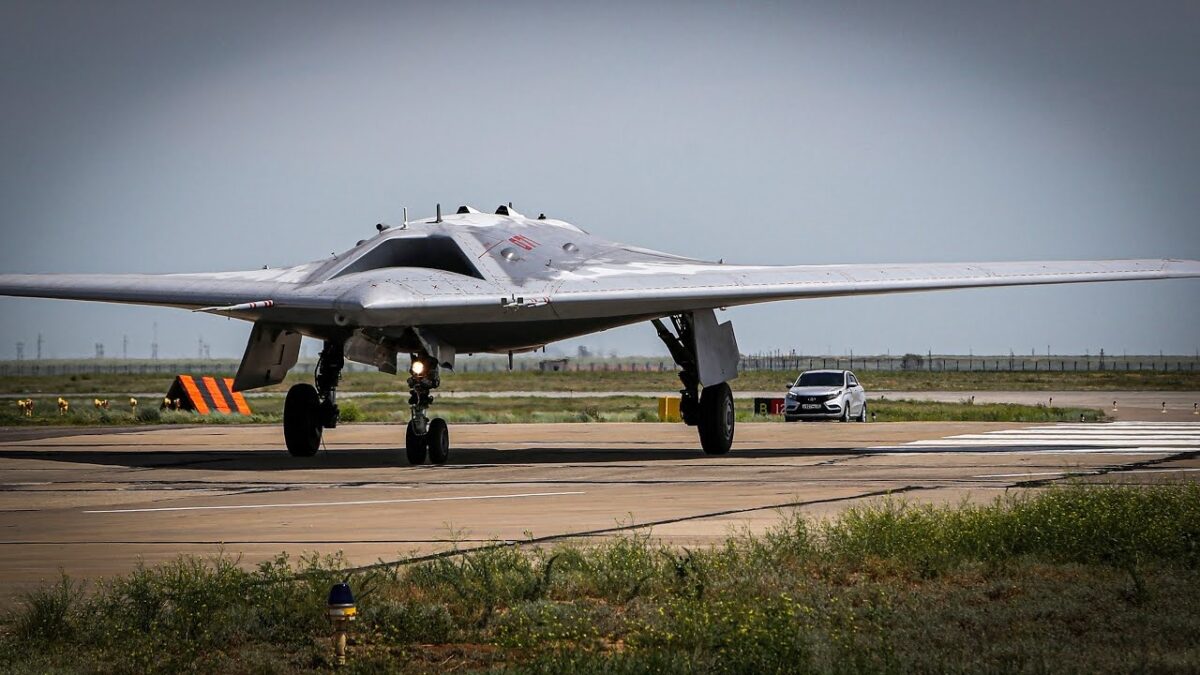 Work on the drone was scheduled to be completed by this summer, with the goal to begin serial production of the S-70 Oknotnik-B sometime early next year.

However, due to sanctions imposed on Moscow after it launched its unprovoked and wholly unwarranted invasion of Ukraine, Russia has struggled to acquire the computer chips and other advanced components for much of its military equipment – and the problem was reportedly so bad earlier this year that microchips from refrigerators and dishwashers were repurposed and used in some tanks and armored vehicles.

The advanced artificial intelligence (AI) that is required with such a drone is significantly more advanced than what Russia may currently be able to produce domestically.

“Two-thirds came from the U.S., one-third from Europe,” Entner told 19FortyFive. “Microprocessors, RAM, you name it. Russian military equipment – planes, tanks, drones, etc. – have western components and parts in it.”

What Russia produces domestically is pale compared to the American versions. 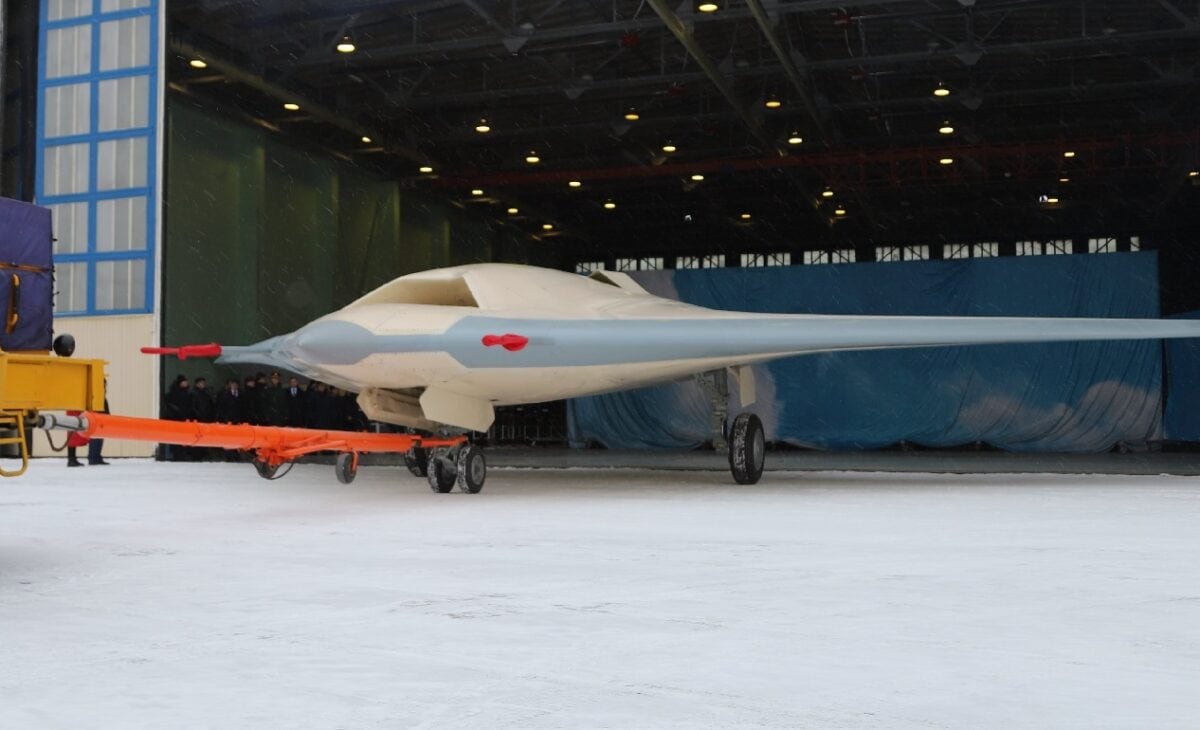 “The best Russian fabrications are at 90 nm, Intel is at 7 nm and TSMC at 3 nm,” Entner continues. “Russia is not able to arm itself without western components; that’s how dramatic its dependency is on the west.”

The situation is so dire, Vladimir Putin had to go hat-in-hand to Iran to essentially beg for the Islamic Republic to supply drones that could be used in Ukraine.

For now, the Hunter-B doesn’t really seem to be all that much of a hunter. At least not if Russia will have to hunt for the parts to even build any additional prototypes.

In this article:Russia, S-70, Sanctions, Ukraine