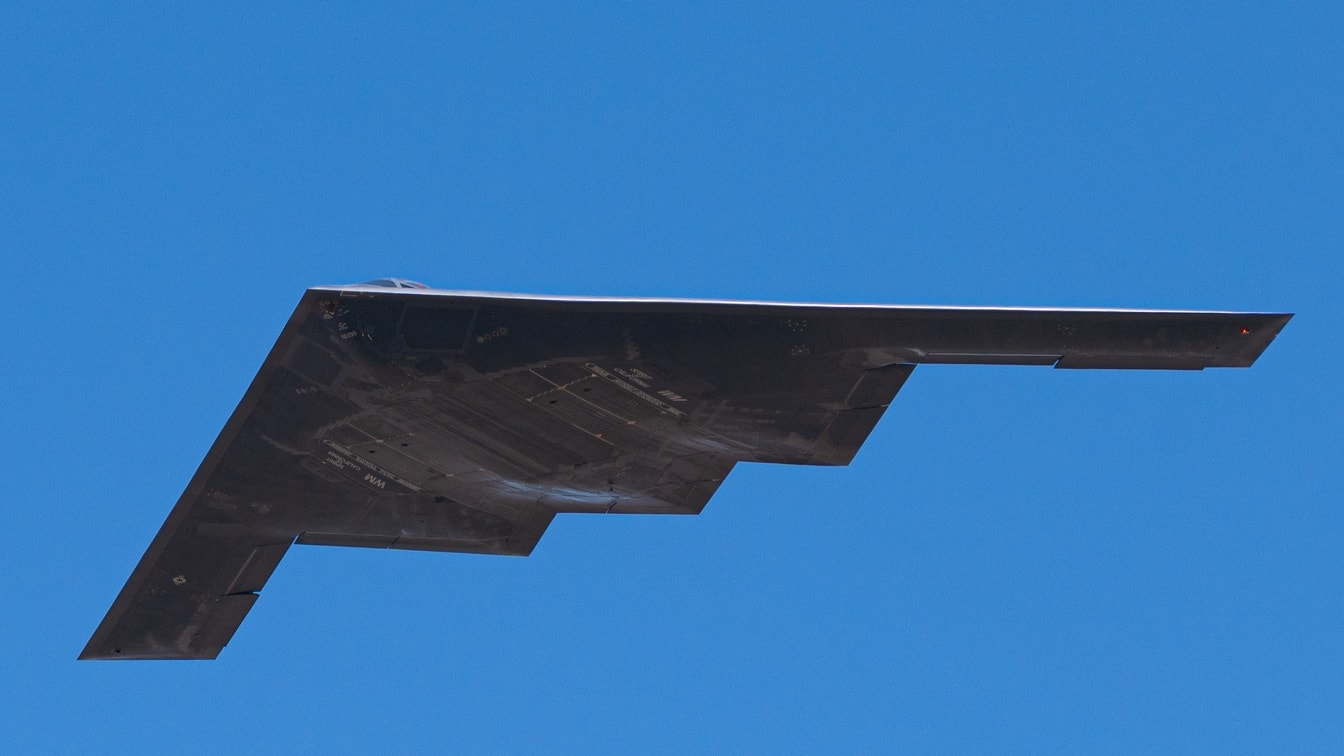 Four U.S. Air Force B-2 Spirit stealth bombers are lined up at the Royal Australian Air Force (RAAF) Amberley airbase in Queensland, according to photographs captured by Planet Labs for The War Zone. This sighting is significant since the four bombers displayed represent 20% of the U.S. Air Force’s full B-2 fleet. In July, the U.S. fleet of B-2 Spirits arrived in Queensland to join Pacific Air Forces (PACAF) Bomber Task Force (BTF) exercises. The U.S. and Australia are ramping up joint efforts to improve tactical operations in light of the looming Chinese threat.

The first pair of U.S. B-2 Spirit bombers landed in Queensland mid-July, starting a new bomber task force mission in the Indo-Pacific. According to Air Force Magazine, the 383rd Expeditionary Bomb Squadron commander said “This deployment of the B-2 to Australia demonstrates and enhances the readiness and lethality of our long-range penetrating strike force. We look forward to training and enhancing our interoperability with our RAAF teammates, as well as partners and allies across the Indo-Pacific as we meet PACAF objectives.” Last year, the two countries celebrated the 10-year anniversary for the Australia-U.S. Force Posture Initiatives. Part of the initiative’s objectives is to enhance air cooperation, maritime cooperation, land cooperation and overall improve bilateral relations over the Indo-Pacific.

Last September, a new trilateral strategic defense alliance between the U.S., Australia and the United Kingdom was established. The AUKUS alliance aims at designing a new class of nuclear-propelled submarines, in addition to improving other military ties in light of growing threats from the People’s Republic of China (PRC). During his visit to Australia last month, chairman of the Joint Chiefs of Staff General Mark Milley said that China’s malign behavior is steadily increasing in the region. The Gen. specifically alluded to the number of intercepts by People’s Liberation Army (PLA) aircraft and ships throughout the Pacific has grown over time, adding, “The message is the Chinese military, in the air and at sea, have become significantly more and noticeably more aggressive in this particular region.”

In addition to China’s presence in the Indo-Pacific, a recent security agreement between Beijing and the Solomon Islands could be even more dangerous. China’s objective to establish a naval base in the South Pacific stems from its desire to gain a foothold in the area which is comprised primarily of “offshore” Asian U.S. allies. The PRC has made it clear that a military operation to invade and take control of Taiwan is imminent. The democratic, self-ruled island that the PRC perceives as rightfully theirs has come under increased provocations in its surrounding waters. According to PBS, “U.S. military officials have said Beijing wants to be ready to make a move on the island by 2027. The U.S. remains Taiwan’s chief ally and supplier of defense weapons. U.S. law requires the government to treat all threats to the island as matters of grave concern but remains ambiguous on whether the U.S. military would defend Taiwan if it were attacked by China.”

Due to China’s alarming rhetoric and behavior in the Indo-Pacific, the ongoing joint U.S.-Australian efforts are becoming increasingly important for deterrence. The U.S. Air Force and RAAF are carrying out fighter jet drills, in addition to experimenting with refueling B-2s from RAAF KC-30 tankers. When asked about the military drills, the commander of the 393rd Expeditionary Bomb Squadron said that “Since our advance team hit the ground… U.S. airmen have integrated with their Australian counterparts in every specialty: fuels, logistics, maintenance, aviators, you name it.” The U.S. Air Force’s B-2 bomber represents a critical component of America’s long-range strike arsenal. Designed during the Cold War, the heavy strategic bomber is equipped with low observable stealth technology designed to enable the airframe to penetrate dense anti-aircraft defenses.

RAAF Air Cmdre. David Paddison also lauded the ongoing joint exercise in Queensland as an important component in U.S.-Australian military cooperation. Paddison stated that “It’s not a regular occurrence for our refueling, security, and firefighters to gain experience on aircraft such as the B-2. This partnership has been instrumental in enhancing the capabilities and interoperability of both our forces through joint exercises and activities. The Indo-Pacific is our home and we stand committed to an open, inclusive, and resilient Indo-Pacific.”

While the U.S.-Australian exercise at the Amberely Air Force base is expected to wind down over the next few weeks, the presence of U.S. B-2 Spirit bombers in the Indo-Pacific will likely remain or even increase in the near future as Beijing builds up its aggressive behavior in the region. Considering B-2s represent one of the three pillars in America’s nuclear triad, the presence of these airframes in Queensland sends a powerful message to the PRC.

In this article:Australia, B-2, B-2 Bomber, China