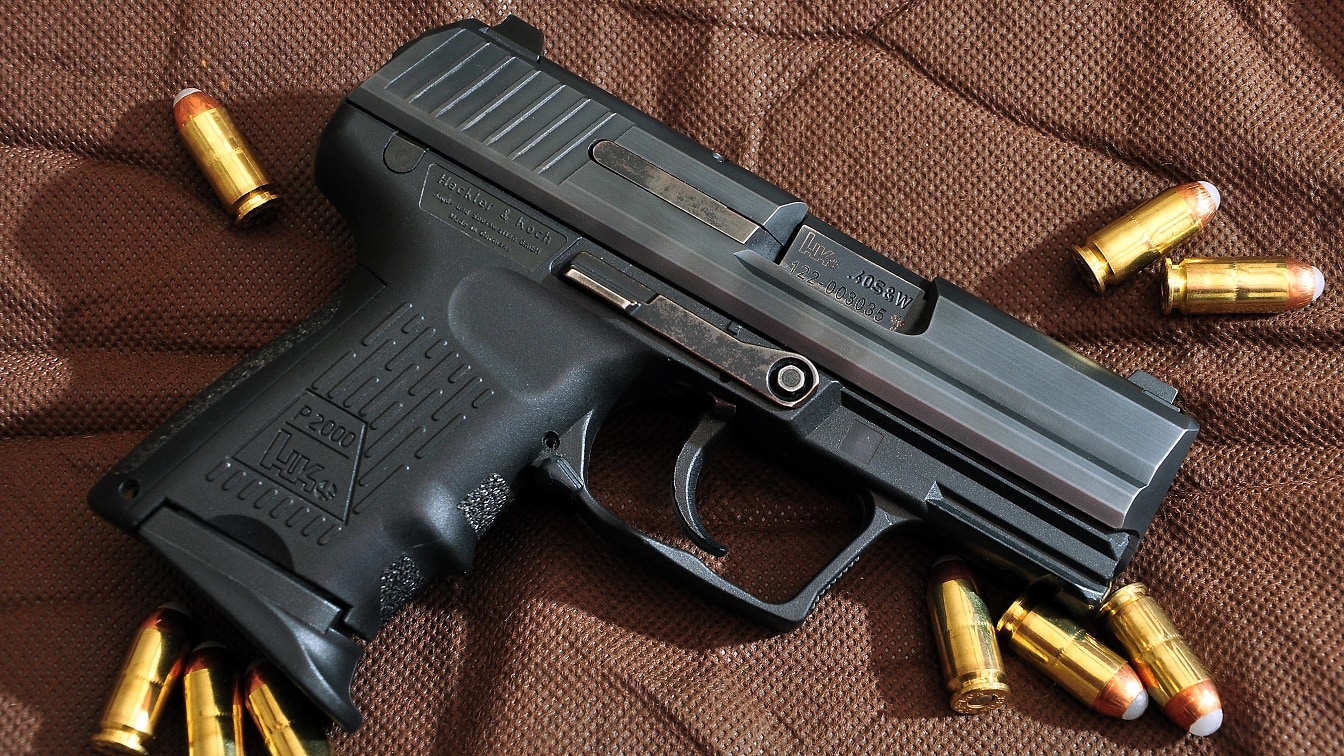 A photo of an H&K P2000 SK surrounded by Corbon Powerball .40 caliber bullets.

I used the HK P2000 for several years. Here is my take on the firearm based on experience: “In a world of compromise, some men don’t.” This was the proud slogan of Heckler & Koch (HK) in the early to mid-1990s. Nowadays, there’s a long-running cynical joke among citizen gun owners that HK’s Customer Service slogan is actually “HK. Because You Suck. And We Hate You.” Be that as it may, HK definitely won an enviable reputation over the past few decades for scoring government contracts in U.S. military and federal civilian law enforcement alike. Arguably HK’s biggest coup of the first decade of the 21st century was when their .40 S&W caliber P2000 LEM double-action-only (DAO) autopistol was selected by U.S. Customs & Border Protection to replace the ubiquitous 9mm Glock 17 as the agency’s standard-issue duty pistol.

HK P2000: A Brief History of the Gun and Adoptive Agencies

The HK P2000 was designed in 2001 and was based largely on their USP Compact model. The new gun was offered in both 9mm and .40 S&W caliber, with a 13+1 magazine capacity for the former caliber and a 12+1 for the latter. A key difference was that while the USP employed a traditional double action AKA DA/SA trigger, i.e. double-action for the first shot and single-action the rest of the way, the P2000 offered a new type of DAO trigger known as the LEM, which stands for Law Enforcement Modification. As Jim Schatz of Small Arms Review explained back in 2001:

“The LEM is Double Action Only mode of operation wherein the hammer is fully cocked and released with each full depression of the trigger. However, that is where the similarities end. Unlike conventional DA Only trigger systems, the HK Law Enforcement Modification uses the rearward movement of the slide to fully cock an internal and separate ‘cocking piece’ positioned within a slot within the hammer itself. The hammer returns forward with the slide after loading or firing. The internal cocking piece, however, located within the hammer, is retained in the cocked position by the sear. When the trigger is pulled the hammer is moved fully rearward through slack to a point where it contacts the sear. It is at this point that the shooter first feels appreciable resistance to the trigger.”

Along with the merger of old agencies came a hodgepodge of carryover duty pistols. The aforementioned Glock 17s were in the holsters of the legacy customs inspectors, while the Border Patrol agents and legacy Immigration inspectors carried their .40 S&W Beretta Model 96, which was basically a larger-bore version of the Beretta 92FS/M9 that was still standard-issue to the U.S. Armed Forces at the time.

It was decided that some degree of standardization was needed for the sidearms of all these officers and agents. In 2006, the HK P2000 won the contract. Evidently the LEM trigger of the P2000 was considered “safer” and less accidental discharge-prone than either traditional DA/SA or the striker-fired “safe action” trigger of the Glock, and the .40 caliber version was chosen over the 9mm due to the perceived lack of stopping power of the smaller cartridge.

Personal Shooting Impressions: Pros and Cons From My Perspective on HK P2000

I myself joined the agency as a CBP officer in November 2006, my first civilian job after seven years as an active-duty U.S. Air Force Security Forces troop. As I’ve noted in previous articles, I’m a huge fan of Glock and Beretta, so admittedly I was initially very jealous of my new colleagues from the “legacy” days who still had these older pistols. Big bureaucracies being what they are. it took awhile to get these more “seasoned” CBP officers transitioned to the HK, so in the meantime we new hires got the first dibs on the new pistols.

I soon found that I could live with the HK P2000, and I actually grew to like it. The LEM trigger pull had a distinct two-stage feel to it that allowed for the development of a decent shot rhythm that aided practical accuracy. In addition, the compact size – 3.66-inch barrel and 24.96-ounce weight – made for reasonably comfortable off-duty concealed carry. During my Federal Law Enforcement Training Center initial qualifications, I shot 296/300 with it, more than good enough for Expert, and during my local follow-on quals at my homeport, I obtained a perfect score with it on more than one occasion. It also helped me win a bronze medal at the Nevada Police & Fire Games in 2007. 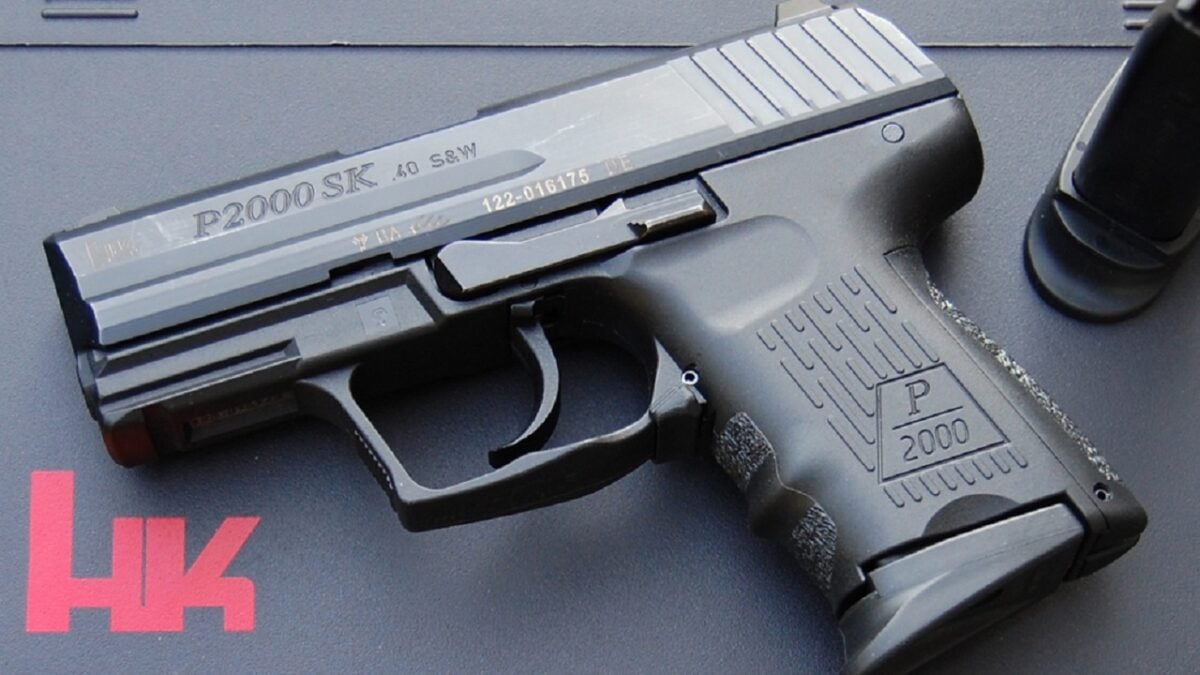 The pistol served me faithfully for three years, with nary a single malfunction, before I went over to sister agency Immigration & Customs Enforcement as a Special Agent. This meant another pistol transition, this time to the SIG P229 DAK .40 S&W, which we shall cover in a separate article. Interestingly, in 2019, CBP announced that they were actually going back to both the Glock brand and the 9mm cartridge, this time via the new model Glock 47. However, that shouldn’t be seen as a knock on the quality of the HK P2000. If you like HK handguns, I definitely recommend it.