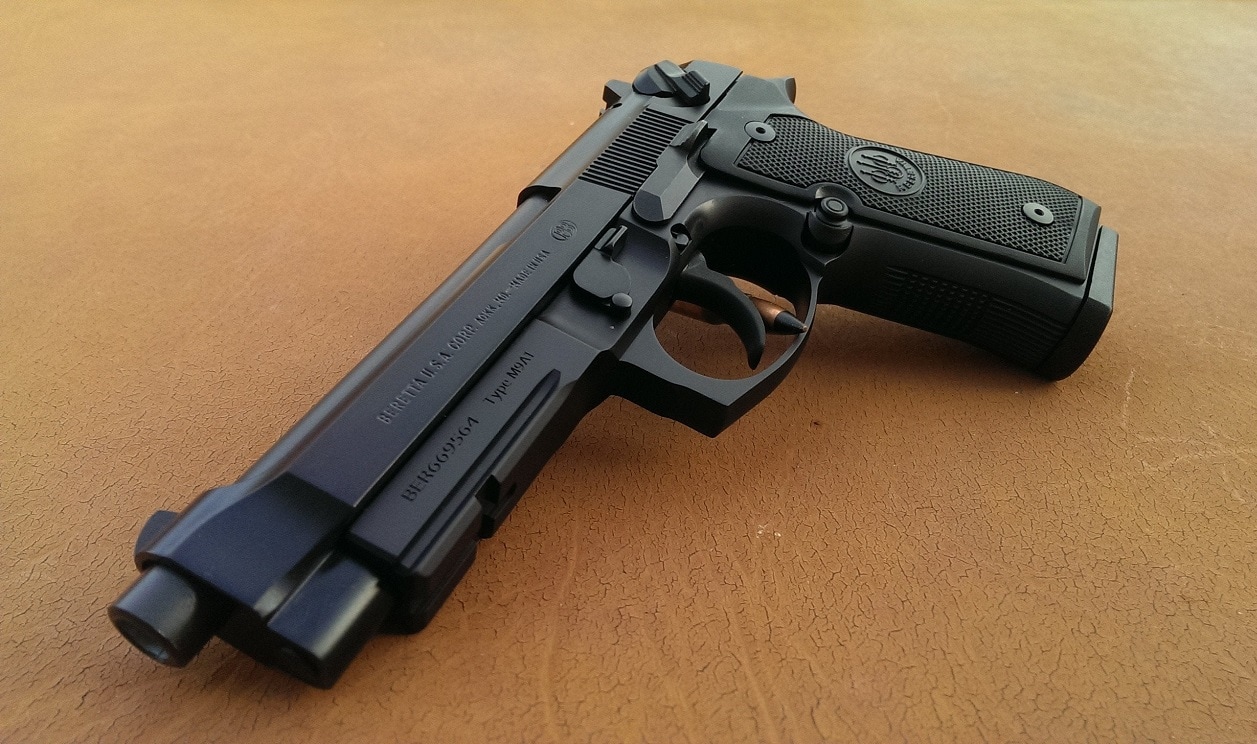 Meet the Beretta M9, a Gun I Have Used Extensively and Can Speak to with Personal Experience  – After 33 years of faithful service, the Beretta 92FS, AKA the M9, officially gave way in 2017 to the SIG P320, AKA the M17, as the standard-issue service pistol of the U.S. Armed Forces. 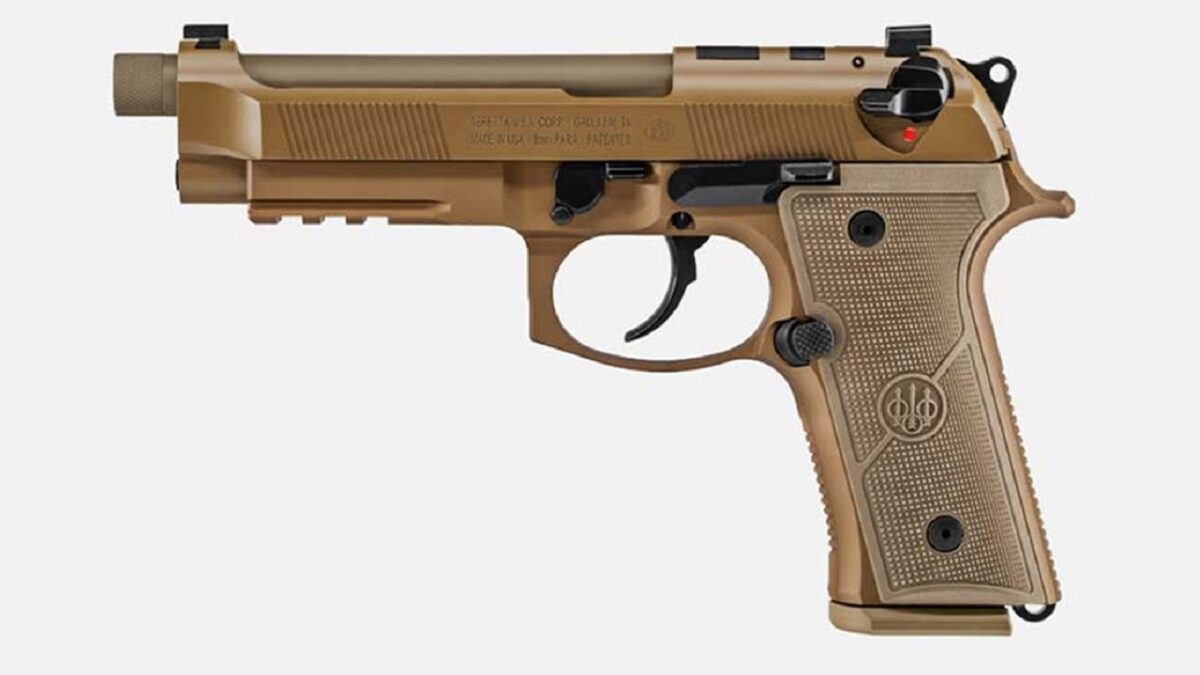 This brought joy to Beretta-haters everywhere and disdain from the legions of Beretta fans – Yours Truly included.

Meanwhile, big-bore fanatics continue to grumble over the fact that the M9’s replacement is still chambered in 9mm, which they say lacks “stopping power.” However, as experts like Gabe Suarez point out, you can’t count on a one-shot stop with any caliber, not even the vaunted .45 ACP. Suarez provides this amusing anecdote:

“Some instructors are also very caliber-focused, thinking that anyone who does not bring a .45 to class is unarmed. One student of mine who carries a 9mm was recently told that his 9mm was simply a .45 set on ‘stun.’ However, the commentator declined to be stunned.”

That aside, let’s take another look at the Beretta 92 and why, the military’s changeover notwithstanding, it is not going the way of the Tasmanian tiger anytime soon.

A Beretta Is Born

Headquartered in Gardone Val Trompia, Italy, and family-owned and operated from the beginning to the very present, this prestigious corporation got its start in 1526 by manufacturing arquebus barrels. By all accounts, Beretta-made barrels equipped the Venetian fleet at the 1571 Battle of Lepanto — one of the four biggest naval battles in history.

Beretta has supplied weapons for every major European war since 1650, and it has supplied pistols for a fair share of Middle Eastern wars as well. The M9’s predecessor, the M1951 Brigadier, was adopted by the armed forces of Egypt, Iraq, and Israel. Those are some strong credentials.

As for the M9 itself, as stated by my 1945 colleague and fellow military veteran Brent M. Eastwood, “We sometimes forget the M9 was born for a very specific reason and its history: the M1911 was becoming outdated.” Or take it from USMC Afghanistan veteran Travis Pike of Sandboxx, who puts it more bluntly when he says about those old .45s that “the remaining examples were beaten to hell after their decades of heavy use.”

Long story short, in the 1984 pistol trials that involved grueling tests for accuracy, reliability, and durability, Beretta beat out SIG, Smith and Wesson, HK, Walther, Steyr, and FN to become the official sidearm of the U.S. military. From there, the Beretta 92 gained even more prestige after it was adopted by a myriad of domestic U.S. law enforcement agencies, including the Los Angeles County Sheriff’s Department and the LAPD (as immortalized by Mel Gibson as Sgt. Martin Riggs in the Lethal Weapon film franchise).

While the Beretta M9 may no longer be the official carry pistol of our boys and girls in uniform, it is far from obsolete. For one thing, having recently returned from a one-year U.S. Air Force contract stint in Germany, I can confirm that while the majority of the Air Force Security Forces personnel I observed at Ramstein Airbase were already carrying the M17, I still saw a decent number of sky cops with Berettas in their holsters.

Moreover, if anything, the Beretta 92 series of pistols is actually surging in popularity. Going back to what I said in my opening paragraph about “big-bore fanatics,” two of the more open-minded members of that demographic are Bill Wilson—arguably the greatest M1911 gunsmith of all time—and Ken Hackathorn. Both have gone on YouTube with some pretty strong endorsements of the Beretta: Wilson says that “I shoot it just as well as the 1911,” and Hackathorn concedes that while he was skeptical at first, now “If I could only buy one firearm, the gun I would most likely trust would be a Beretta 92,” adding that it’s “the most reliable handgun I ever used.” Massad Ayoob of the Lethal Force Institute, a contemporary of Bill and Hack’s, not only lavishes praise on the Beretta 92, but has written plenty over the years to dispel a lot of the misconceptions and exaggerations about the pistol’s alleged lack of reliability and durability.

My Personal Use of the Beretta M9

Speaking from personal experience, the Beretta 92 was the first pistol I ever truly fell in love with. (I mean that strictly in the platonic sense, folks, lest any hoplophobe out there start throwing Joyce Brothers-style insinuations my way.) That was back in November 1989, at the tender age of 14. The Beretta’s detractors claim the pistol is too bulky for small-handed shooters. Well, this may be strictly anecdotal, but as that 14-year-old lad, I was 5-foot-2 and 100 pounds soaking wet, with a corresponding hand size. I had no issues at all with the Model 92’s ergonomics, instead finding it to be a delightfully comfortable and sweet-shooting pistol.

Fast-forward to 1999, in my first year as a USAF Security Forces troops (HOOAH!) The Beretta M9 helped me earn a device for an AF Small Arms Expert Ribbon.

Fast-forward now to the 2010s, and this beloved pistol helped make me the top shot in training classes for my Japan and Kosovo security contract assignments, as well as being recognized as the most accurate shooter at my local International Defensive Pistol Association matches in Southern California. I ended up purchasing two of them: one in standard finish, and one Operation Enduring Freedom USAF Commemorative Edition (one of 1,000 produced). For good measure, I received a U.S. Armed Forces 20th Anniversary Commemorative as a going-away gift from the owner of my local range when I transitioned from the military back to civilian life. 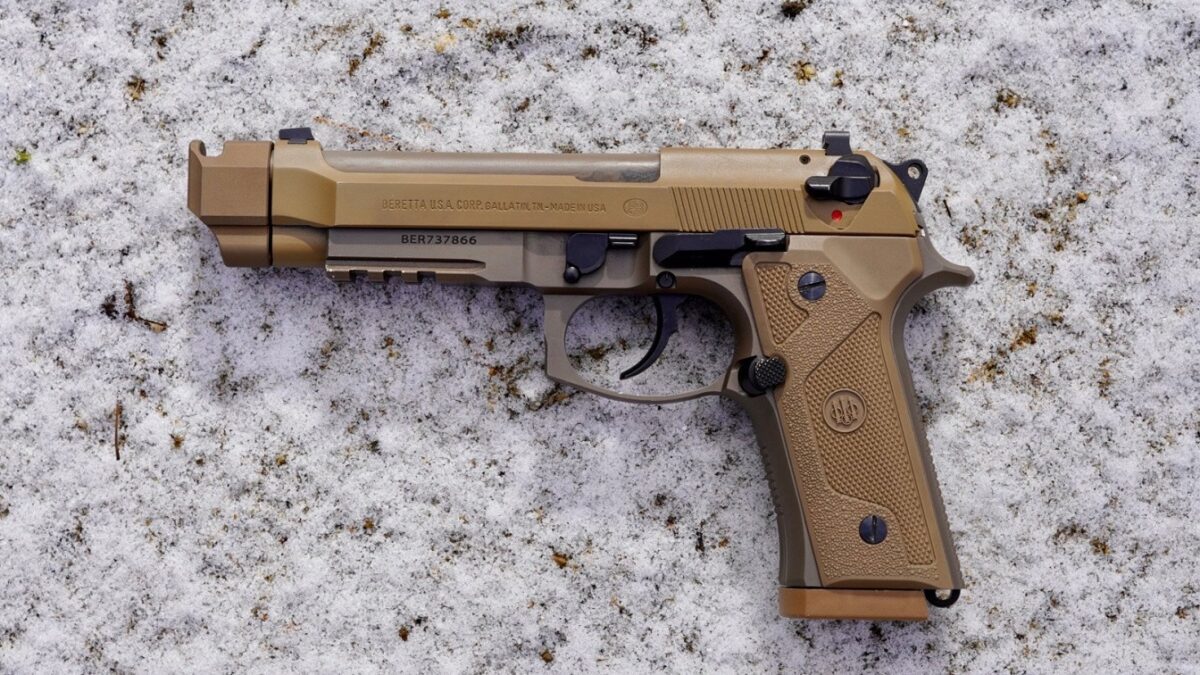 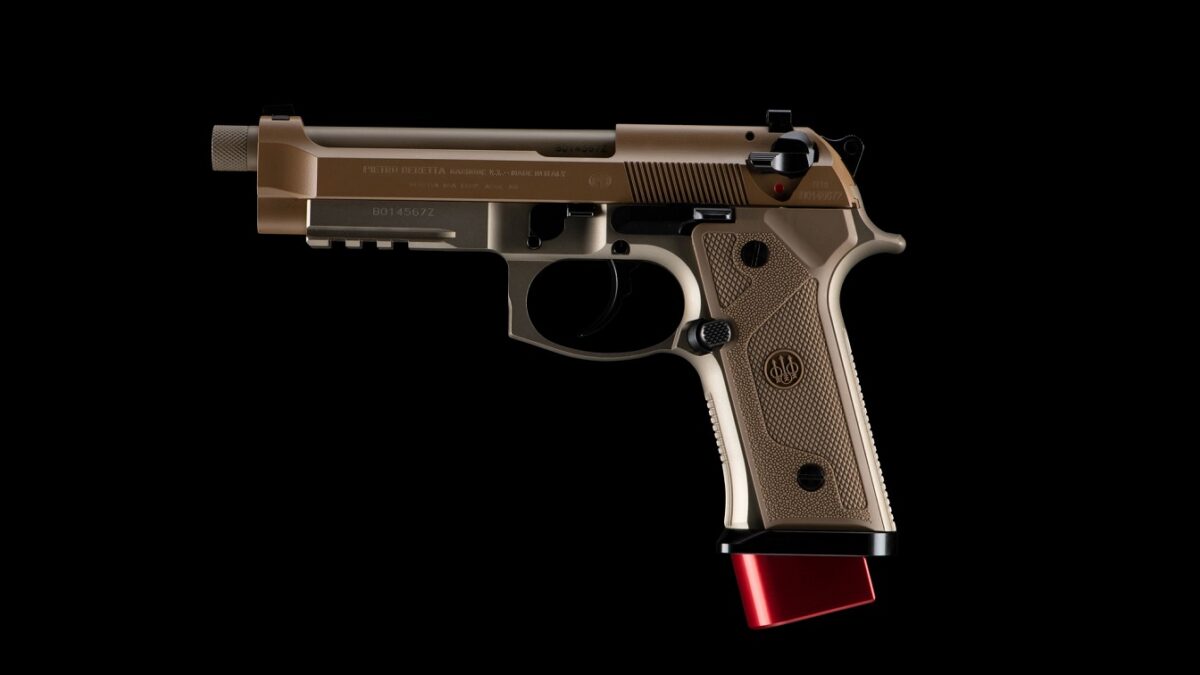 Finally, let’s come back to the present. For the purposes of this article, I took one of my beloved Berettas back to the range, specifically to the On Target indoor shooting range in Severn, Maryland, a top-notch facility staffed by a really cool bunch of folks (shoutout to Kevin, Joe, JD, and Louie).  The old girl still had it. (Again, no Joyce Brothers jokes please!)  While my shot groups weren’t my all-time best—it might be time to upgrade my corrective lenses —I was still able to easily nail all my head shots at 25 feet, and to keep my shots within the center of mass at 75 feet. For ammo, I used PMC Bronze 124-grain FMJ, with 50 rounds fired at each distance. 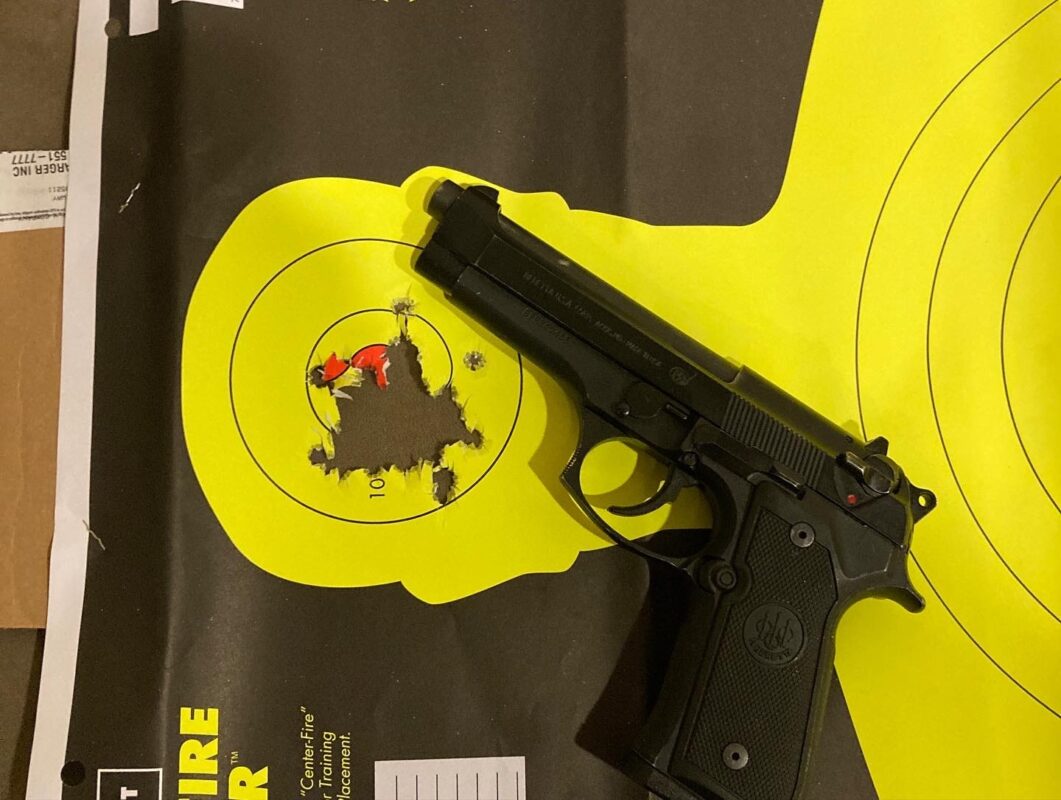 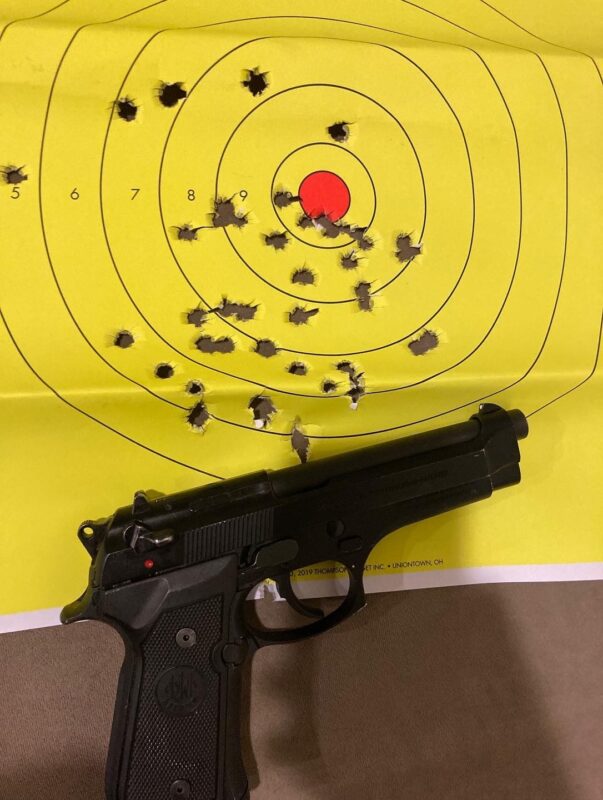 For the sake of brevity, since I’ve probably been too verbose already, here’s a handy-dandy link to the Beretta 92FS’s specifications.

Christian D. Orr is a former Air Force officer, Federal law enforcement officer, and private military contractor (with assignments worked in Iraq, the United Arab Emirates, Kosovo, Japan, Germany, and the Pentagon).  Chris holds a B.A. in International Relations from the University of Southern California (USC) and an M.A. in Intelligence Studies (concentration in Terrorism Studies) from American Military University (AMU).  He has also been published in The Daily Torch and The Journal of Intelligence and Cyber Security. Mr. Orr has 33 years of shooting experience, earned Pistol/Small Arms Expert ratings with the Air Force, Customs & Border Protection (CBP), and Immigration & Customs Enforcement (ICE), has won multiple shooting trophies, medals, and awards via the Glock Sport Shooting Foundation (GSSF), IDPA, and the Nevada Police and Fire Games (NPAF).