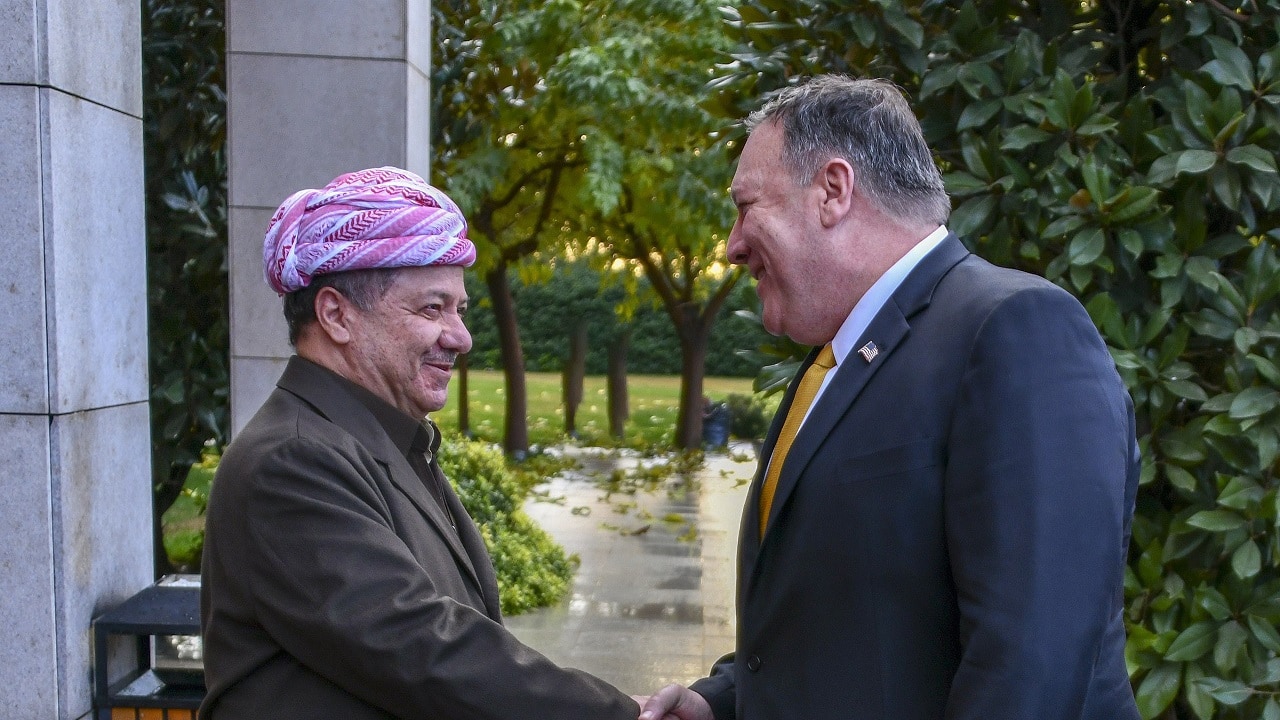 Iraqi Kurdish politician Masoud Barzani never cared for democracy. Even as he paid lip service to it for the sake of American support, he made little secret of his desire to empower his own family at the expense of the broader good. Barzani systematically put his sons, nephews, and cousins into key positions of power, while their spouses and close associates set up mechanisms and shadow corporations to siphon off billions of dollars of the region’s wealth. Americans may have dreamed about Jeffersonian democracy in Iraq, but Barzani’s model was Dubai: He wanted to treat Iraqi Kurdistan as a personal fiefdom, with his immediate family ruling absolutely while dominating commerce.

Iraqi Kurdistan is not Dubai, though. For one, it has different neighbors. The United Arab Emirates shares borders with Oman and Saudi Arabia, and it has an outlet to the sea. Iraqi Kurdistan is landlocked, and it is squeezed between Iran, Turkey, and Syria, as well as the rest of Iraq.

Just as important, while family ties dominated Dubai, not every family rules the same way. Dubai’s ruling Maktoum family certainly dominates business, but the Maktoums also understood that too much greed can smother the creation of wealth. The Emiratis, unlike the Iraqi Kurdish ruling elites, understand that wealth comes from expanding the pie rather than simply looting it. This meant spreading wealth around, rather than tightly monopolizing it. In contrast, every generation of the Barzanis sought to marginalize non-Barzanis and more distant tribal relatives while taking a bigger piece of the pie.

This dynamic was a major reason why, in 1975, Jalal Talabani, the deputy to Masoud’s father, Mulla Mustafa Barzani, spun off to form the Patriotic Union of Kurdistan, or PUK. This marginalization of family factions will be on full display in October, when Masoud’s eldest son Masrour uses the theater of elections in Iraqi Kurdistan to consolidate control. Masoud will push out his cousin, Nechirvan, who currently serves as the president of Iraqi Kurdistan, in favor of younger brothers Babo and Waysi. (In practice, this might mean constitutional revisions to reshuffle the structure of government and eliminate Nechirvan’s office. The Constitution will be no impediment, as the Barzanis consider it a suggestion rather than the supreme law).

The Kurdish Bargain over Iraq’s Presidency

Family dynamics and an unwillingness to share power in Kurdistan also explain much about Masoud’s positioning in Iraq after the fall of Saddam Hussein. After Iraqis ratified their Constitution and held democratic elections, Masoud allowed longtime rival Talabani’s nomination as Iraqi President. His logic was that the title would satisfy Talabani, while his presence in Baghdad would keep him from interfering in Kurdish politics. This would leave the way clear for the Barzanis to expand their reach and tighten their grip.

That deal worked, but not as well as Barzani hoped. He never really consolidated control over portions of Iraqi Kurdistan that the Talabani family ruled. This failure may have surprised him, given how it contradicted his own self-perception. The problem here is Masoud’s isolation. The Kurdistan Democratic Party leader lives in a mountaintop resort and palace complex that once belonged to Saddam Hussein. His son Masrour controls access to him. Masoud sees no fault in his sons and does not realize how skewed his perceptions have become. He learns about regional developments by both talking with whomever his son allows through, and watching his party’s television channels. These inputs are sycophantic. In practice, while locals in the Talabani-dominated city of Sulaymani may be frustrated with Talabani’s nepotism, corruption, and failure to deliver, they despise the Barzanis, who represent a much more conservative and restrictive lifestyle.

Nevertheless, the compact Barzani made with Talabani and, after his 2014 death, Talabani’s sons Bafil and Qubad, has persisted. While Barzani’s Kurdistan Democratic Party always outperformed Talabani’s PUK at the polls, Barzani nevertheless deferred to the PUK choice for the presidency. This led, for example, to the rise of Fuad Masum, an uncharismatic and ineffective PUK functionary, who assumed the presidency after Talabani’s death.

As the Kurdistan Democratic Party’s vote share increased relative to the PUK, Masoud began to reconsider his deal. Jalal Talabani was a formidable opponent: gregarious, multilingual, personable, and shrewd. But Talabani’s death left a void, and Masoud believed he could have it all: His own fiefdom in Iraqi Kurdistan and a satrapy in Baghdad, presided over by a trusted aide.

In Iraq’s 2018 parliamentary elections, the KDP won 25 seats to the PUK’s 18. Rather than accept the PUK’s choice of Barham Salih for the presidency, Masoud Barzani nominated his consigliere, Fuad Hussein, who was by any measure unqualified for the position. Brett McGurk, the State Department’s pointman on Iraq, feared Masoud would throw a temper tantrum and work to destabilize the country if he did not get his way. So McGurk urged Barham to stand down.

Barham refused, however, and to Barzani’s surprise, many of the political factions he expected to support him broke party loyalty to support Barham over Fuad. While many Kurds criticize Barham for his political maneuvering, no one doubts he has been an extremely talented president. He raised Iraq’s prestige abroad, for example, with a Papal visit. He heightened the importance of his office at home by becoming an important facilitator of deconfliction, especially during the October 2019 protest movement.

Masoud resents Barham’s success. He opposes Barham for his membership in a rival party, for his past success over Fuad and, after the most recent polls, for outmaneuvering Masoud’s uncle Hoshyar Zebari and his subsequent pick, the brutal yet incompetent Rebar Barzani. He also resents the fact that the world respects Barham, while most leaders judge Masoud as a mediocre and corrupt ruler, as well as a poor father whose sons range from incompetent and spoiled to sociopathic.

Ousting Barham could be a Pyrrhic Victory

As Iraqi factions engage in unprecedented brinkmanship that last week erupted into open violence, Barzani appears determined to make the price of his support to be “anyone but Barham.” This could mean a KDP functionary or perhaps a less charismatic PUK official, such as Talabani’s brother-in-law Latif Rashid. Fair enough. Politics is a brutal sport.

Barzani’s pride, however, may finally be his undoing. Should Barzani’s maneuvering force Barham’s ouster, Barham would likely return to Iraqi Kurdistan. In both Sulaymani and Erbil, there is real hunger for reform, but there has not been a politician sincere, competent, or charismatic enough to deliver it. Erbil especially is a powder keg as Masrour fails to realize that co-option trumps violence as a means to address dissent. Masoud may believe Kurdistan to be stable, but should Barham return to the region, he can become a rallying point for younger, disaffected Kurds who truly crave change.

Masoud may believe ousting Barham will be sweet revenge. But his isolation and aloofness might have a real cost. Barham will have a chance to show a new generation that a better life and subservience to the Barzani clan are mutually exclusive.

For too long, Iraqi Kurds have faced a choice: despair or flight. Those freezing in Belarusian forests or drowning in the English channel were not escaping violence – they were fleeing Barzani’s repression and corruption. Kurdistan needs someone like Barham, who might channel Kurds’ talents toward real change. Frankly, after two decades of wasted opportunity in Iraqi Kurdistan, such change cannot come quickly enough.