Russian President Vladimir Putin has announced that the country is activating 300,000 of its reserves, troops who have at least some military training, that stops short of a full mobilization and a draft.

Putin’s speech to the nation on Wednesday morning was a tacit acknowledgment that the war is not going well and that Russia has lost many of its troops and the battalion tactical groups inside of Ukraine are operating well below normal operating strength.

It was Russia’s first mobilization since World War II, and many analysts believe that it will likely trigger more doubt inside the country. And those fears were quickly realized.

If Putin thought that his speech was going to drum up support for the war, he was, at least initially, very much mistaken. With the announcement, Reuters reported that one-way tickets for flights out of Russia were quickly selling out. With flights to many destinations that don’t require visas selling out, prices spiked for flights to Dubai. A ticket there was selling for more than 300,000 rubles ($5,000) – about five times the average monthly wage.

Putin Says Callup “Necessary and Urgent” Because of the West

Putin’s short speech to the nation called for the partial mobilization and callup of reservists because the West had “crossed all lines” by providing advanced weapons to Ukraine.

After Russia had suffered grievous losses early in the war in trying to seize Kharkiv and Kyiv, the war settled into an advance by crawling slowly across the Donbas, characterized by heavy artillery bombardments not only against Ukrainian troops but against civilians and civilian infrastructure as well. But the recent counteroffensive by Ukraine has decimated Russian forces around Kharkiv, and now they’re moving into Luhansk province, one of the provinces that make up the Donbas.

In his speech, Putin went back to his usual veiled threats of using nuclear weapons while accusing the West of using nuclear blackmail, saying that Russia has “lots of weapons” and adding that he isn’t bluffing.

“To those who allow themselves such statements about Russia, I want to remind you that our country also has various means of destruction, and some components are more modern than those of the NATO countries,” he said.

Russia also made the ridiculous assertion that Ukrainian troops are only on the front lines for photos and videos and that NATO troops are doing the fighting. About a week ago, Ruslan Ostashko, the host of “Time Will Tell” on Russia’s state-run Channel One, said, “In the grand scheme of things, Ukrainian soldiers are there more for appearances, for having photos taken and uploading videos to TikTok, but it’s mainly NATO troops fighting there.”

In response to Putin’s speech, Western leaders said it highlighted a regime wracked in desperation of its failing war effort.

Bridget Brink, the U.S. ambassador to Ukraine, posted on Twitter that the mobilization is a sign “of weakness, of Russian failure.”

In an interview Wallace elaborated.

“He and his defense minister have sent tens of thousands of their own citizens to their deaths, ill-equipped and badly led,” Wallace said. “No amount of threats and propaganda can hide the fact that Ukraine is winning this war, the international community is united, and Russia is becoming a global pariah.”

Shortly after Putin’s speech, Russian Defense Minister Sergei Shoigu stated that Russia has 25 million people who fit the criteria of having the relevant training or combat experience to be called up. He said that they are selecting only one percent of those, about 300,000, for mobilization.

“These are really those who have served, have a military speciality, that is, a speciality that is needed today in the Armed Forces, who have combat experience,” Shoigu said.

“Those who are serving under conscription – it doesn’t apply to them either,” he added. “They are not subject to any mobilization and direction for the ‘special military operation’. Our conscripts also continue to serve, as they did, on the territory of the Russian Federation.”

Russia conducted its first update on casualty numbers since March when they posted the total number of deaths at 1,351. Shoigu said 5,937 Russian soldiers had been killed since the start of the invasion. Western and Ukrainian estimates are much higher. Back in August, the Pentagon put the estimates on Russian dead at 15,000 and overall casualties between 70,000-80,000.

Also included in Putin’s speech was his announcement that he supported the referendums that would see all occupied Ukrainian territory become part of Russia.

The hurried move to hold these sham referendums by the Donetsk and Luhansk regions in the east, known as the Donbas, and Kherson and Zaporizhzhia in the south, because of the lightning offensive of Ukraine that threatens to take Lunhansk back. Russia has only taken a portion of Donetsk oblast (province).

This sham referendum, which has zero chance of being legitimate, is a Russian power play because according to Russian law, if the fighting in occupied Ukraine continues, then Russia can assume that this is an attack on Russia itself, which will open up all kinds of escalation, including the use of nuclear weapons. 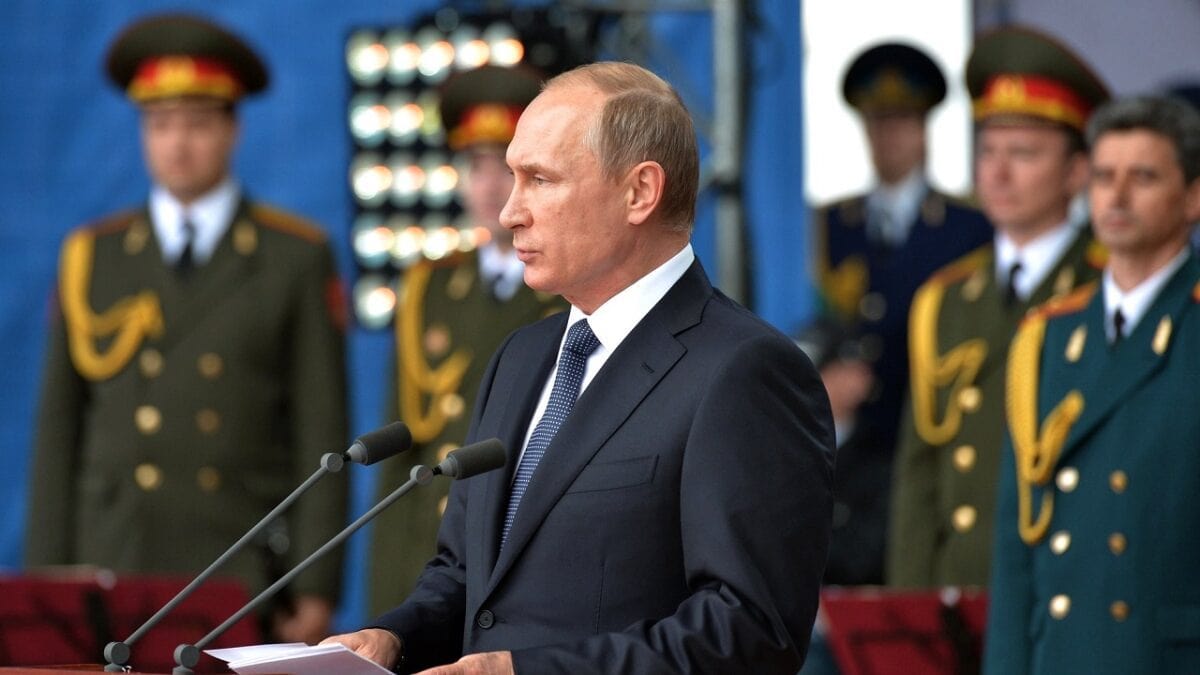 Vladimir Putin at the opening ceremony of international military-technical forum.

NATO chief Jens Stoltenberg said, “Sham referendums have no legitimacy and do not change the nature of Russia’s war of aggression against Ukraine. This is a further escalation in Putin’s war. The international community must condemn this blatant violation of international law and step up support for Ukraine.”