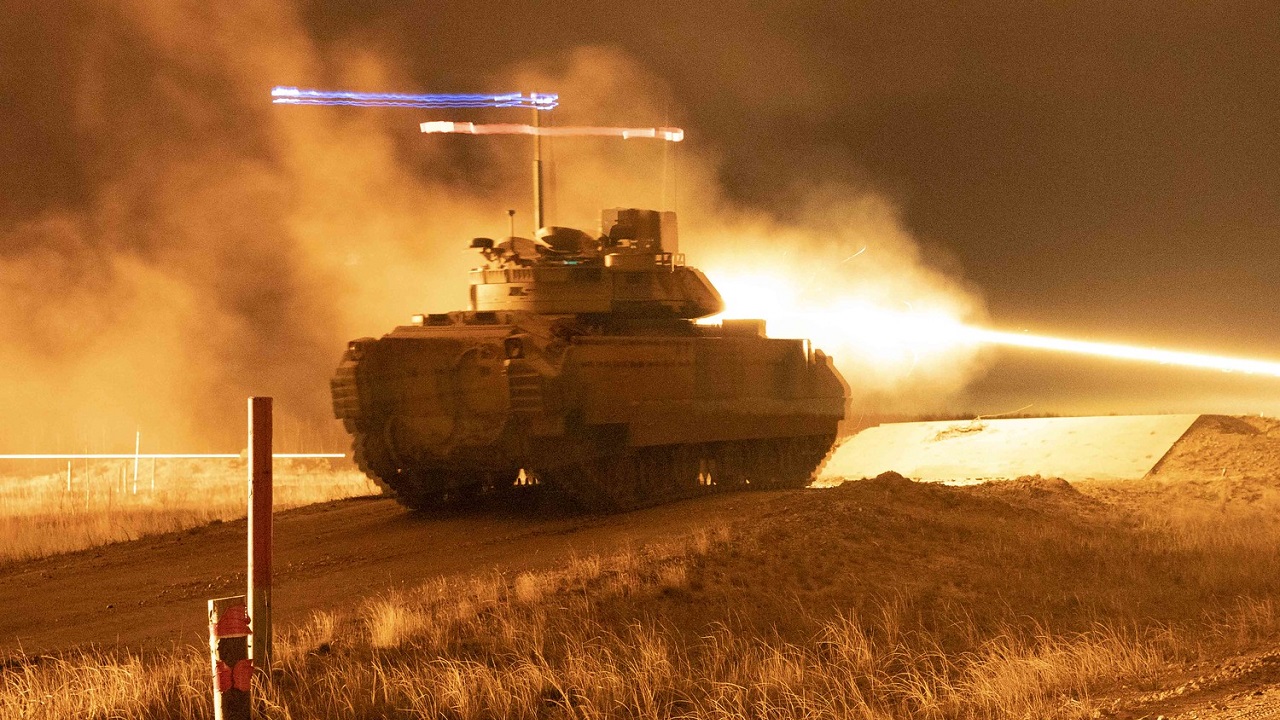 How to Protect the Bradley Fighting Vehicle: The Russian invasion of Ukraine has underscored the critical role of heavy armor in at least some future high-end conflicts. The large losses in armored fighting vehicles suffered by both sides are not an argument against tanks and armored fighting vehicles but a reflection, at least in part, of the lack of active protection systems for those platforms. U.S. M1 Abrams tanks sent to Europe are equipped with such a system, called Trophy. Trophy protects against a range of anti-tank projectiles.

Similar protection is now available for other armored vehicles, particularly the Bradley Fighting Vehicles that accompany M1s in the Armored Brigade Combat Teams (ABCTs) into combat. If the Army wants to project a credible conventional deterrent to future Russian aggression, it would, at a minimum, equip the Bradleys in those ABCTs whose Abrams have active protection with another capable defensive system, the Iron Fist.

The current conflict in Ukraine has many insights for the U.S. and its NATO allies to consider regarding the face of future high-end conflicts. One of the more obvious lessons is the centrality of tanks and armored fighting vehicles in such a fight. Armored forces have been critical to both the Russian offensive and Ukrainian counteroffensive.

While most press coverage has been devoted to the air war and artillery-missile exchanges, this war has really been about forces on the ground, particularly armored and motorized formations. The war has seen the employment of thousands of armored platforms—tanks, armored fighting vehicles, self-propelled howitzers, reconnaissance vehicles, and transports. Both sides are looking to deploy more armored vehicles; Russia from its war reserve stockpiles and Ukraine from Western inventories. NATO allies are looking to recreate their tank parks disbanded at the end of the Cold War. Poland is acquiring upgraded U.S. Abrams SEPV3 main battle tanks as well as hundreds more from South Korea. The U.S. Army has reinforced its presence in Eastern Europe with additional Armored Brigade Combat Teams (ABCTs).

This conflict has also seen enormous casualties in these forces. One credible estimate puts the losses in tanks on both sides at well over 1,000, as well as nearly 5,000 other vehicles. These losses were inflicted by many systems, but particularly by anti-tank guided missiles such as U.S.-provided Javelins and TOWs, rocket-propelled grenades, and recoilless rifles.

Such casualty levels for armored vehicles have led some to argue, prematurely, that the war in Ukraine demonstrates that tanks and armored fighting vehicles are the relics of a bygone era and will be increasingly irrelevant in an environment dominated by precision guided munitions, long-range anti-tank systems, and autonomous drones. Such a conclusion is premature, at best.

The reality is there are a number of reasons for this elevated level of tank losses and armored fighting vehicles. One is the inability of either side to achieve air superiority and conduct effective close air support for ground forces. Another is poor combined arms tactics, particularly by the Russian Army. A third is the abysmal level of technical support and sustainment for forces in combat, meaning that damaged platforms could not be recovered or repaired.

But a leading cause for the severe losses in tanks and armored fighting vehicles by both sides is their lack of an active protection system (APS). Along with defenses against low-flying drones, an APS system would provide an effective means of engaging many of the weapons that have proven so effective on the Ukrainian battlefield.

An APS consists of three basic components: a central computer or controller, a radar, and electro-optical sensors that provide 360-degree surveillance of the area around a vehicle. This third item is able to detect, classify, and track incoming objects and launchers for countermeasures of various sorts. The APS is placed on the top of the tank or armored vehicle where it has the best view of the surrounding area. When an incoming anti-tank guided missile, rocket-propelled grenade, or long-rod penetrator from a tank is detected, the system tracks the threat and launches a countermeasure at the optimum moment to defeat the attack at a calculated distance from the vehicle. Different APS designs employ a variety of sensors, countermeasures, and battle management systems. Some are better suited for heavily armored vehicles such as tanks and others are best for lighter vehicles.

While neither Russia nor Ukraine appear to have deployed armored platforms with an APS, they are present in the theater. Beginning several years ago, the U.S. Army began adding the Trophy APS to its M1A2 Abrams. This is a highly effective system originally designed for Israeli Merkava tanks. The U.S. Army has outfitted the M1 tanks of four ABCTs, those units that are being deployed on a rotational basis to Europe.

While the tanks in these ABCTs are equipped with an APS, the Bradley Fighting Vehicles that will accompany them on the battlefield, transporting an infantry squad into battle, are not so protected. This creates an obvious target for any enterprising anti-tank gunner.

The U.S. Army has a system called Iron Fist which could protect the most advanced version of the Bradley, the A4, and possibly even other armored vehicles. This system has many of the features of a standard APS but is specifically designed to protect vehicles with less armor protection that a tank. Iron Fist uses a different countermeasure than that employed by Trophy, one that employs an explosive shockwave to knock the threat object down, preventing it from forming a plasma jet that could damage a Bradley or lightly armored vehicle.

While it had some initial technical problems, the Iron Fist is now fully functional and ready for deployment. Those initial problems had to do with money. Even though it would only cost $185 million to put Iron Fist on a full ABCT’s worth of Bradley A4s (154 vehicles), the Army has put this request on its unfunded priority list. 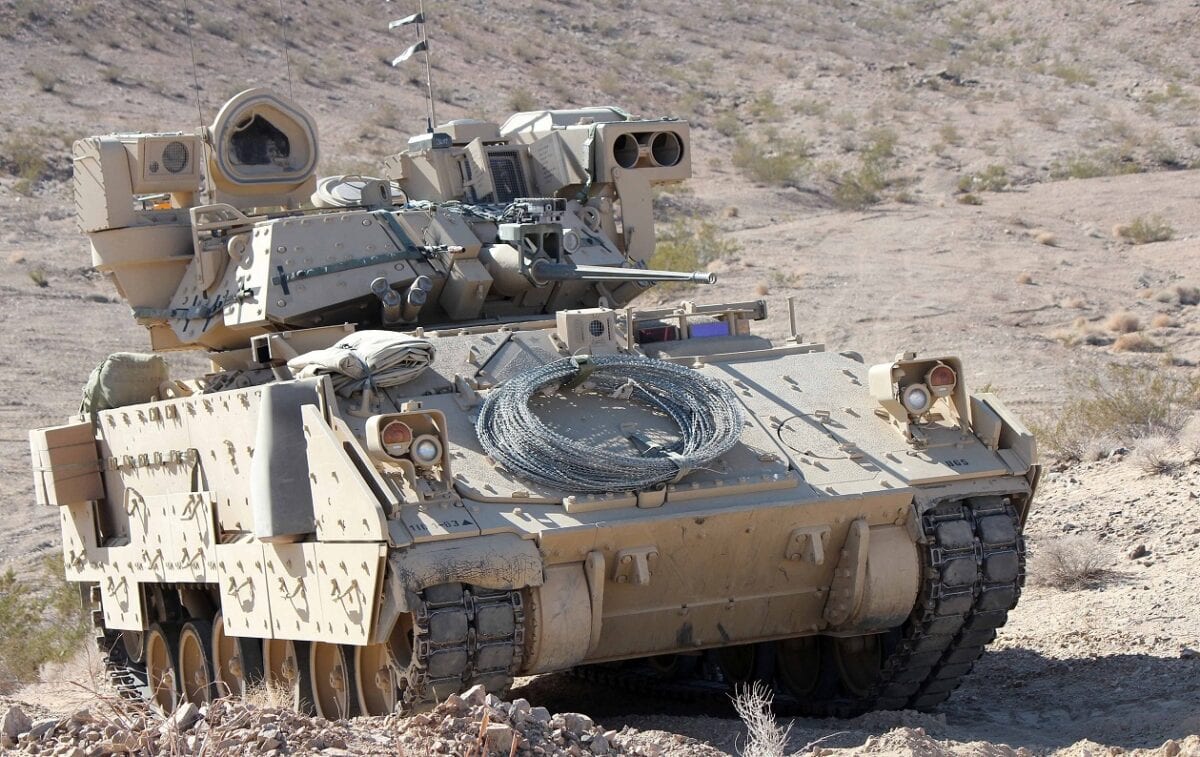 An M2 Bradley Fighting Vehicle is on display during a training exercise at the National Training Center in Fort Irwin, Calif., Feb. 18, 2013. The live, virtual and constructive training environment of the National Training Center is designed to produce adaptive leaders and agile forces for the current fight, which are responsive to the unforeseen contingencies of the 21st century. (U.S. Army photo by Sgt. Eric M. Garland II/Released)

Ukraine has shown the world how deadly the modern battlefield will be for armored vehicles. But the U.S. has a way of protecting them. The Army needs to make funding the deployment of Iron Fist for the ABCTs that have Trophy-equipped M1s a priority. Doing anything less places soldiers riding in the Bradley A4s at an unacceptable risk.