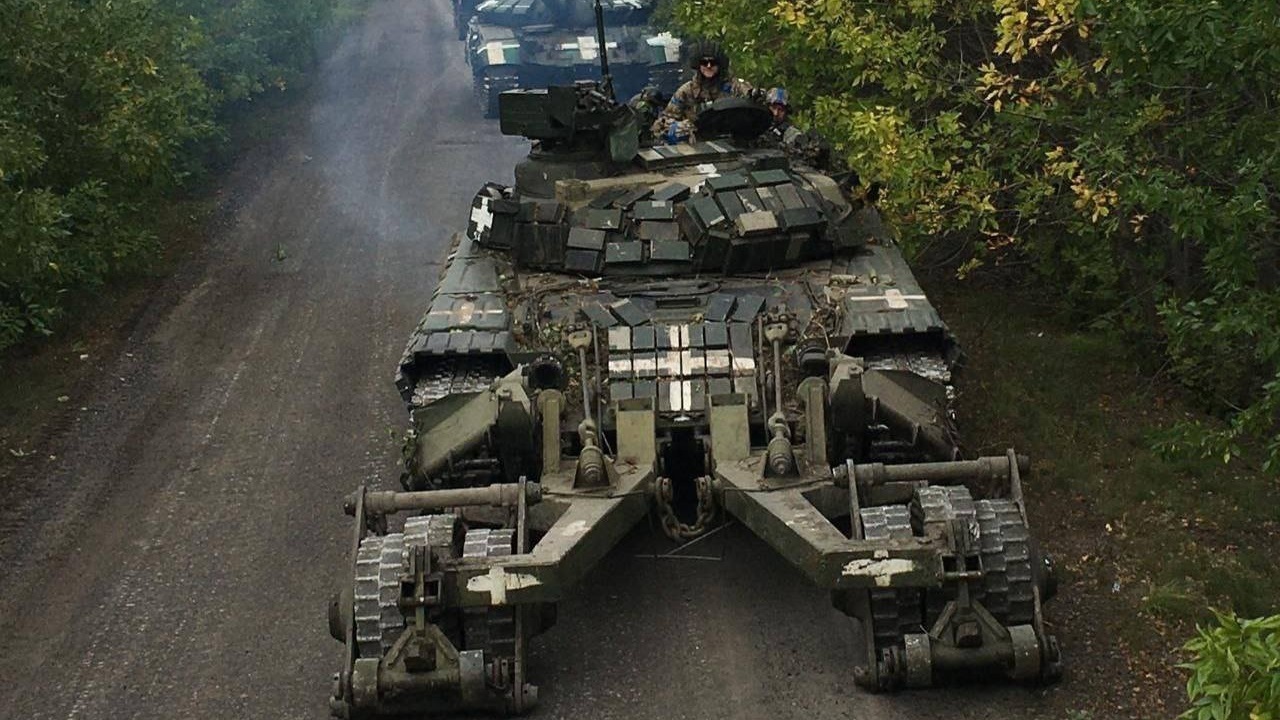 Amidst the chaos of mechanized warfare on a fluid battlefield, it’s not uncommon for specialized units to have to adapt to combat roles for which they weren’t intended. In such situations, it can pay to get creative.

Such was the case of an unusual engagement on September 9, documented with photos and video footage posted on the social media site Telegram during Ukraine’s Kharkiv counteroffensive—a battle in which a minesweeping tank without a cannon apparently defeated a Russian BMP-2 infantry fighting vehicle using seemingly medieval methods.

High noon on the road to Izyum

Between September 6 and 11, a surprise counteroffensive by Ukrainian armor and motorized infantry in Ukraine’s Kharkiv province cut Russian supply lines, ultimately forcing Moscow’s elite 1st Guards Tank Army to abandon much of its equipment and flee from its forward base in Izyum to avoid encirclement and destruction.

According to a post on the Ukrainian military blog NIP Tysk one of the Ukrainian columns pressing southeast towards Izyum on the M03 highway was spearheaded by a specially modified T-64A tank equipped with a minesweeper, a variant informally dubbed the BMR-64, after the BMR-2 and BMR-3 Soviet mine-rolling tanks.

While Ukraine’s army ordinarily only operates the later T-64B model, in 2018 several T-64As were withdrawn from storage and refitted by the Kharkiv Armored plant with KTM-7 mine-rollers designed to prematurely trigger anti-tank mines, which are calibrated to detonate only with the passage of a heavy vehicle. The vertically suspended rollers themselves could usually survive multiple mine blasts. Of course, even with rollers mine clearing isn’t entirely risk-free.

As the Ukrainians return to their homes in the unoccupied areas they face the dangers of landmines on their properties. Farmers who are trying to sow and harvest crops face the imminent danger of hitting landmines.
The minesweeper BMR-64 is in a hurry to start clearing mines. pic.twitter.com/vfCjqPFvgs

The T-64A’s 125-millimeter D81T gun and internal turret machine gun were removed. However, the vehicle’s frontal armor was fortified with dozens of bricks of Kontakt-1 Explosive Reactive Armor, which helps protect against portable anti-tank rockets or missiles that might be used in an ambush.

In theory, the BMR could roll in front of a mechanized column at 4 to 7.5 miles per hour, detonating or unearthing mines as it went with its rollers, while vehicles behind closely followed in its tracks to avoid hitting any mines that may have passed between the rollers or were lying elsewhere on the road.

Behind the BMR-64, which was also carrying four paratroopers riding atop its rear hull, were a Ukrainian BMP-2 infantry fighting vehicle and a captured Russian T-72B main battle tank.

NIIP Tysk separately posted a transcribed oral account by a paratrooper – likely from Ukraine’s 80th or 25th Air Assault Brigade – inside the turret of the BMR-64 describing the trouble the column encountered while rolling down a tree-lined stretcher of M03 just after passing the rural village of Vyshneva.

His account has been translated with modifications for clarity and idiom by the author.

“Our minesweeper always goes first in the convoy: we lay out the routes for everyone, but in this context, we are the most armored bastard in the column, and here it played a significant role. We are heavy and protected. Here the tank commander notices at this gap that a BMP [infantry fighting vehicle] is coming to meet us. We stop and wait.”

The Russian vehicle, a BMP-2, was probably too close to use its anti-tank missile launcher, and its rapid-firing 30-millimeter cannon couldn’t penetrate the front armor of a main battle tank—but with sustained fire, could blast un-armored equipment (or personnel) on a tank’s exterior and stun the crew.

The BMR-64, in turn, had just one weapon: a large 12.7-millimeter NSVT anti-aircraft machinegun mounted next to the tank commander’s hatch which theoretically could be fired from within the tank. Unlike its frontal plate, a BMP-2’s thinner side armor is thin enough to be conceivably penetrated by 12.7-millimeter caliber rounds.

But what works in theory doesn’t always do so in practice, as explained by the paratrooper:

“The NSVT was a bit messed up before: it didn’t work for some reason, but it was supposed to work — you had to press the button hard — that’s what the mechanic told me, at least. The NSVT doesn’t even have an electric drive that rotates it. That is, it turns using these spinners and it is unrealistically inconvenient to shoot from it – except that I could climb out and manually shoot from it …”

“I ended up, damn it, at the place where the BMP was supposed to leave [the road]. She slowly moves out on the horizon, I pull the electrically actuated trigger with all my might. Damn! No way, I can’t shoot! I open the hatch – it fucking doesn’t open, because you have to stupidly push upwards with all your might – and only then does it open and not slam back down.

“As a result, the tank commander shouts ‘I’M GOING TO RAM!’

“In no time we were barreling forward madly. I somehow managed to get out to the paratroopers behind the turret and shout for them to hold tight because we are going to kill them now.

“We hit that horse like a horse – it [the BMP] immediately flew into the ditch along with the infantry on top of it.”

Later photos and video show the impact bashed a hole in the vehicle’s right, frontal side. The damage wasn’t mutual.

“Why didn’t my boys (4 paratroopers) also fly off? They didn’t because we’re on a 40-ton main battle tank, and these devils are on a light [15.8-ton] fighting vehicle. Somehow we weren’t jolted too much …  Immediately after that, I tried to climb into the right hatch, I didn’t succeed at all, I just opened the gap and saw how closely, literally from 10-15 meters, my paratroopers were shooting these bastards.

“I climbed into another hatch, but at that moment our minesweeper began to back away. The paratroopers had already dismounted from the tank … I noticed the bushes are moving, so I tried to shoot at the lower part of the bushes and the movement stopped. That was it.”

After the ramming, there is combat footage recorded from inside the Ukrainian BMP-2 (note the tell-tale ribbing on its front hull) behind the minesweeper. The BMR-64 is visible in front and to the left with some Ukrainian paratroopers dismounted near it, while the Russian BMP-2 can be seen further ahead in the ditch to the right. (A full-length recording of the firefight and its aftermath is viewable here.)

Video from one of the Ukrainian BMP-2 in that armored column with a T-72B3 tank and modified T-64A tank/BMR with a mine-roller engaging a Russian BMP-2 near Vyshneva, Kharkiv Oblast.https://t.co/Se05dAkrek https://t.co/b9TL96oE2v pic.twitter.com/uaE1DKiwlz

For two minutes, rifle and machinegun fire is audible. Then at 2:15 minutes, the rattle of heavy automatic fire can be heard and the Ukrainian BMP driver urgently rolls backward, seeking cover in a ditch behind obscuring smoke.

The Russian BMP-2 apparently managed to roll back to the center road, but the damage from the ramming caused its right track to run off its rollers, as can be seen in a video recorded after the fight from onboard the BMR-64. The minesweeper passes the disabled Russian BMP-2, then a Ukrainian BMP-2, itself slightly damaged on the left side of its sloped glacis armor, with the crew and six infantrymen posing on top.

What inspired the ramming maneuver? At the end of the paratrooper’s account, he notes:

“Our driver-mechanic also says: ‘But I played in World of Tanks, I know how to do [this maneuver.]’”

This refers to the popular multiplayer video game, which has a large following in Ukraine and Russia. Historically speaking, ramming is not unheard of as a last-ditch maneuver. But it remains quite rare and it’s a safe bet it’s more common in computer games.

“The tank driver later told me that he saw the BMP’s driver get out of the vehicle and fall to the ground with a thud.”

The blog post concludes with an accounting of the engagement’s outcome:

— there are no losses on the Ukrainian side;

— 4 Russians who were riding the armor and the BMP-2 crew were killed;

— the BMP-2 itself and small arms of Russian soldiers were captured.