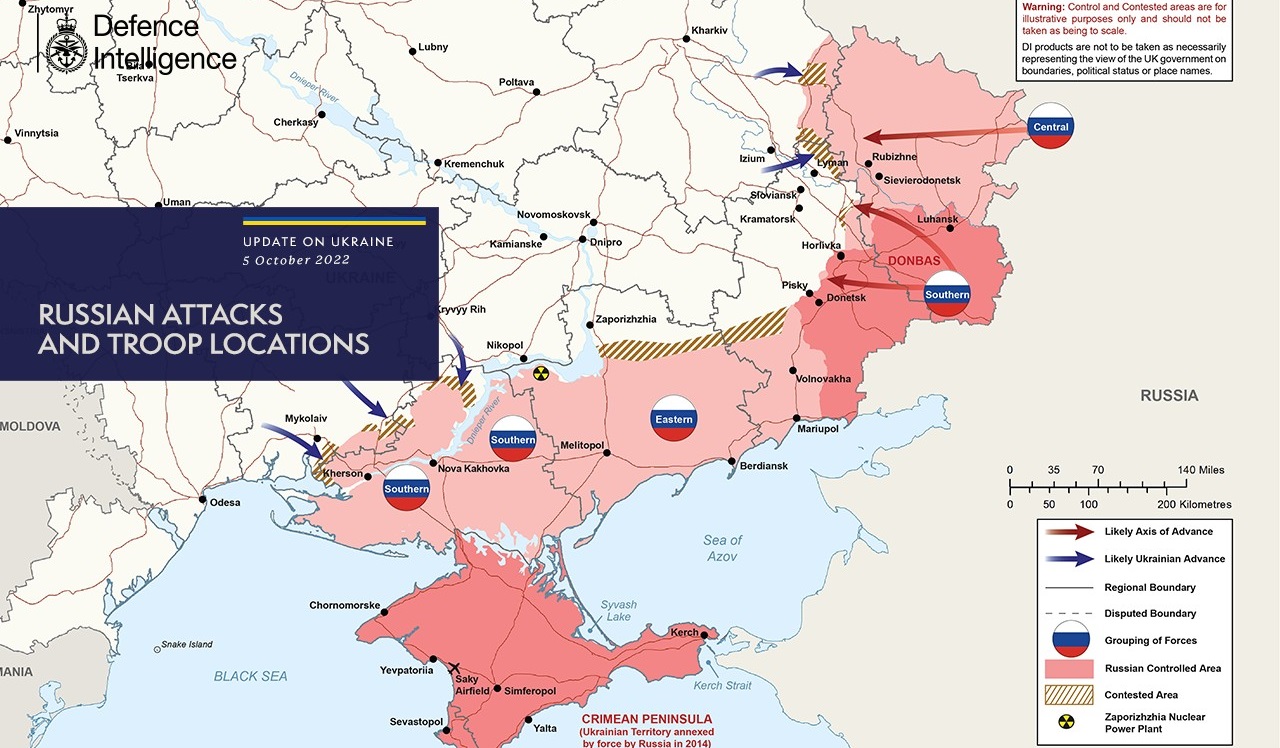 After pushing back Russian soldiers by several kilometers over the weekend, reports stretching from Monday night into Tuesday reveal the extent to which Ukrainian forces have pushed back Russian forces and liberated towns and cities in the Kherson region.

By Tuesday, Ukrainian forces made new advances along the Inhulets River, forcing Russian units to evacuate the villages of Novodmytrivka, Velyka Oleksandrivka, and Mala Oleksandrivka.

War analysis account BlueSauron noted on Tuesday afternoon how Ukrainian forces had also successfully liberated the Ukrainian village of Petropavlivka, also in Kherson Oblast, and that Russian forces are “retreating to their new defense lines,” likely resulting in the liberation of other towns and cities “without any resistance.”

Maps published by the Russian Ministry of Defense reveal the extent to which Russian forces have lost ground in the southern region of Kherson. In a daily video briefing from the ministry on Tuesday, however, no information was provided about Russian retreats – making on-the-ground reports from Ukraine essential for understanding the current dynamics of the conflict.

The maps did, however, show that Russian forces no longer controlled the village of Dudchany, which sits on the west bank of the Dnieper River.

The maps also showed Ukrainian forces making gains in Kharkiv Oblast in the northeast. Substantial gains were made in the region from early September when Ukraine launched its successful counter-offensive, and despite the deployment of more troops to Ukraine from Russia, most of those gains have not been reversed by invading forces.

Maps shared by Rybar, a pro-Russian Telegram channel, appeared to show significant Russian retreats within a space of just four hours, with Russian forces retreating south. The Russian line of defense appeared to move from as far north as Velyka Oleksandrivka to Bezvodne, some 17km south.

Russian media Rybar’s latest map shows how dire the situation is in northern Kherson for Russia. These maps are 4 hours apart. pic.twitter.com/d8ZrxOdLZS

It means that the warzone between the two defense lines has shifted south, and Ukraine’s new line of defense now stretches from Novodmytrivka in a southeasterly direction, only slightly north of both Tryfonivka and Nova Kam’yanka, right down to Dudchany on the west bank of the river.

Ukrainian President Volodymyr Zelenskyy confirmed the gains in his Tuesday nightly address to the nation, describing how his military was making “quite fast and powerful progress” in the regions Putin claimed were “annexed.” Zelenskyy also noted that Ukrainian forces had taken dozens of settlements across all four “annexed” regions over the last week.

“In particular, according to the military reports from the Kherson region: the settlements of Lyubymivka, Khreshchenivka, Zolota Balka, Bilyaivka, Ukrainka, Velyka and Mala Oleksandrivka, and Davydiv Brid were liberated from the occupier and stabilized. And this is far from a complete list…” the Ukrainian president said, adding that it’s “only a matter of time” before Russian forces are removed from Ukrainian territory entirely.