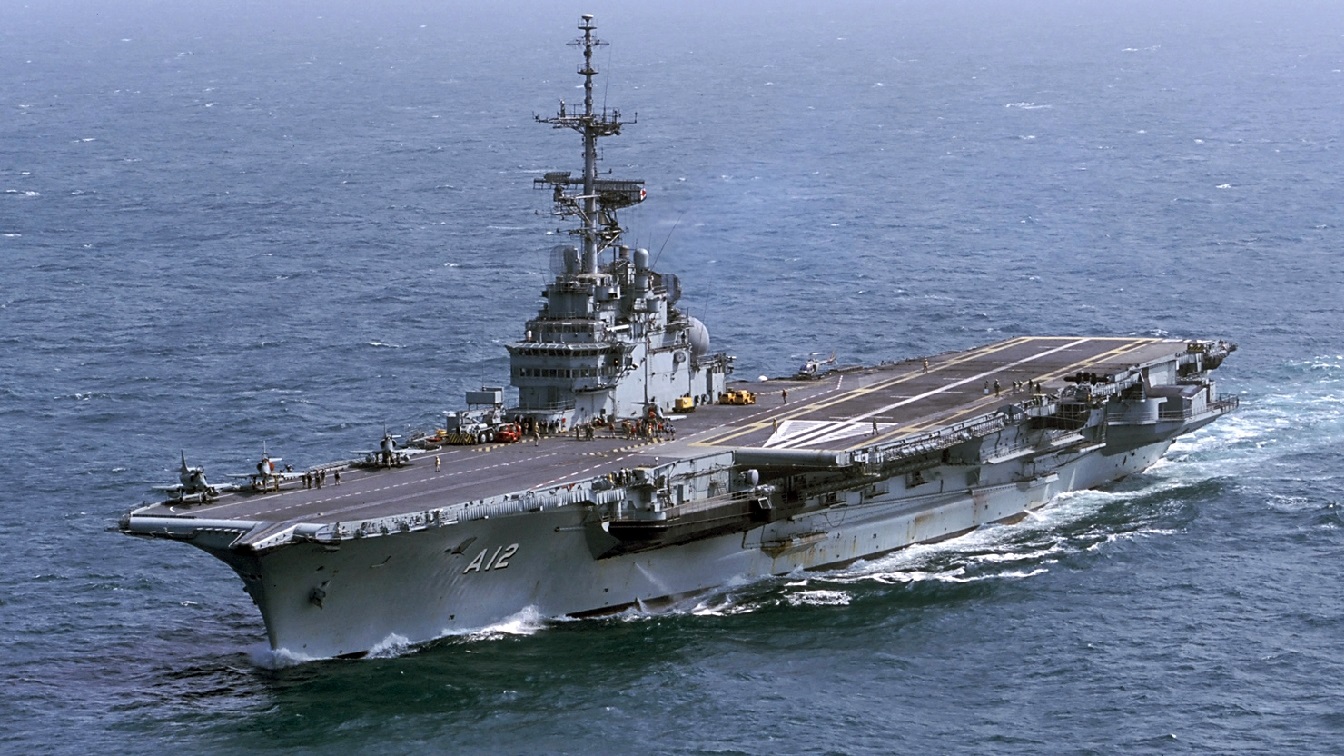 Sao Paulo at sea, seen from a Bell 206 Jet Ranger.

Brazil has the only aircraft carrier in Latin America, but they would rather not have one at all. Their carrier, the Sao Paulo, is a ghost ship filled with cancer-causing asbestos and other dangerous waste.

It was supposed to be scrapped in Turkey, but the Turks eventually said no way to the toxic ship and decided to send it back to Brazil in August. Now, the Sao Paulo cannot even acquire a berth in its home country. The Brazilian Environmental Agency knows it has a problem on its hands. The ship could endanger the maritime habitat and wildlife – to say nothing of the risks to laborers tasked to scrap it.

Sao Paulo: The Aircraft Carrier No One Wants

To make matters more difficult, the tugboat assigned to the Sao Paulo is filled with toxic scrap metal from the doomed carrier. The tugboat was berthed in the Port of Suape on the coast of Pernambuco in in early October. A Brazilian federal judge ruled that the tugboat and carrier could not be stored at the Port of Suape and mandated a daily fine against the flotilla if it did not leave port. Now the carrier and its tug do not have a home, and the flat-top is floating on the water like a ghost ship.

Earlier this year a Turkish company agreed to buy the carrier and scrap it. But the Turkish Ministry of Environment, alarmed by the mesothelioma-causing asbestos and other dangerous radioactive materials on board, ruled in August that the Sao Paulo could not enter the country. The tug and carrier had to turn around near the Strait of Gibraltar, with no choice but to head back to Brazil.

The carrier is currently floating about 12 miles off Pernambuco. The owner of the carrier, Turkey’s Sok Denizcilik, is urgently begging different Brazilian ports to take the ship, but it has found no takers. Sok Denizcilik is one of the leading ship and marine recycling companies. It won an auction to buy the Sao Paulo in 2021 because it had the facilities to handle ships with toxic materials. It is not clear what the firm is going to do now, as the Sao Paulo has no home.

A watchdog non-governmental organization believes that the ship, originally operated by France, sat too close to nuclear weapons tests carried out in the 1960s, and radioactive fallout drifted to the carrier. This NGO believes that the Brazilians did not properly test for the correct level of asbestos, and that the navy only revealed a fraction of the material that was present. There could be hundreds of tons of asbestos on board, making it a hazard during the recycling process and endangering workers.

The Story of the Sao Paulo

The Sao Paulo was introduced by the French navy as the Foch in 1962 and sold to Brazil in 2000. It is the sister ship to the Clemenceau, which was also found to be full of asbestos after its retirement. The Sao Paulo was successfully refitted and became the flagship of the Brazilian navy. During its heyday, the Sao Paulo could carry 40 aircraft. It operated two catapults and two elevators. The A-4KU Skyhawk fighter was deployed on the Sao Paulo – this airplane was outdated during the carrier’s service life with the Brazilians.

The Sao Paulo was difficult to maintain and spent months at port during downtimes. It usually only operated for three months at a time. Toward the end of the ship’s lifecycle, Brazil was only using it as a trainer for pilots. The carrier was victimized by a fire in 2012, and Brazil decommissioned it in 2018.

The Sao Paulo is stuck among bad options. The only thing Sok Denizcilik could do is sell it to another firm that has the capability to scrap a large ship plagued by toxic materials. This would likely be in the United States, the United Kingdom, or elsewhere in Europe, but these are places with strict environmental regulations. The Turkish company will probably have to sell at a loss. The Brazilian government should also take responsibility for the carrier, if it did not disclose how much asbestos and radioactive waste was on board in the first place. Brazilian regulators may have to overrule their judge and take it into port until the wreck can be sold to another company and finally be towed away for good.