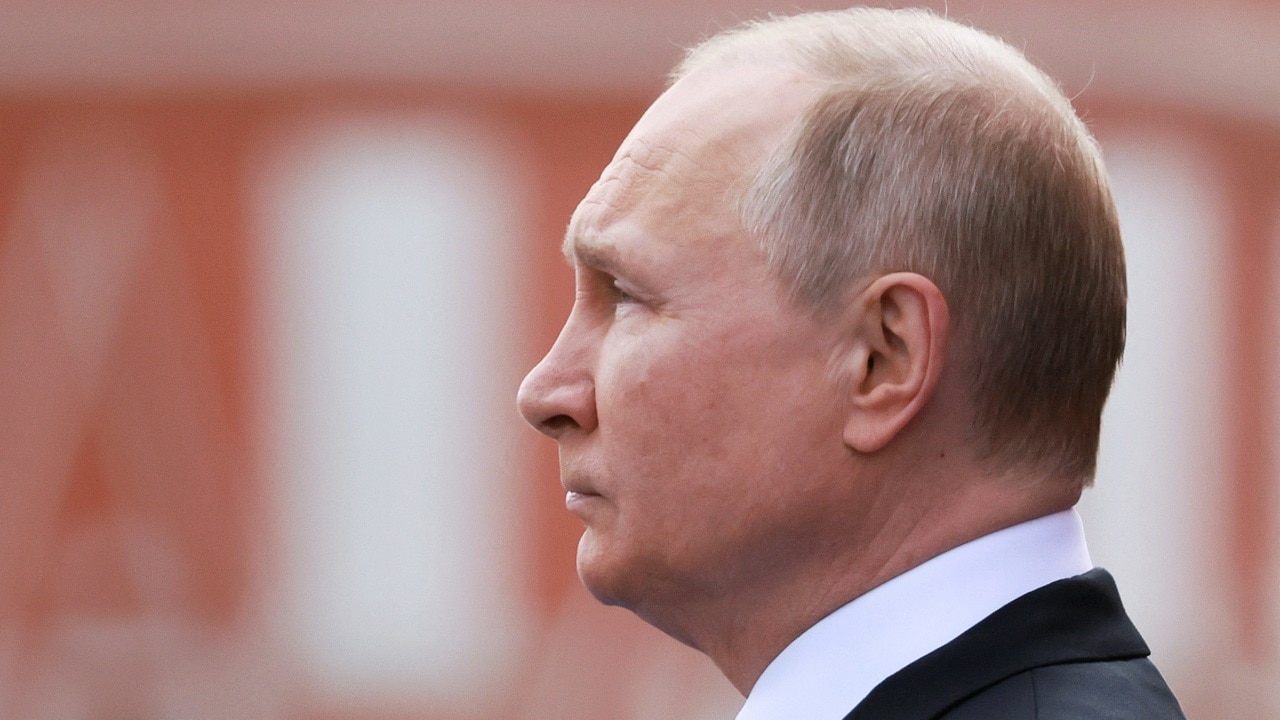 Russian President Vladimir Putin watches a military parade on Victory Day, which marks the 77th anniversary of the victory over Nazi Germany in World War Two, in Red Square in central Moscow, Russia May 9, 2022. Sputnik/Mikhail Metzel/Pool via REUTERS ATTENTION EDITORS - THIS IMAGE WAS PROVIDED BY A THIRD PARTY. THIS PICTURE WAS PROCESSED BY REUTERS TO ENHANCE QUALITY. AN UNPROCESSED VERSION HAS BEEN PROVIDED SEPARATELY.

Azerbaijan, like Russia, is a security state. President Ilham Aliyev rules from Baku with an iron fist. Indeed, Freedom House ranks Aliyev’s Azerbaijan as even less free than Vladimir Putin’s Russia. Whereas once Azerbaijan sold itself to the West as an opponent to Putinism, Aliyev today increasingly sides with Russia, profits from Russia, and appears to take his cues from Putin.

Putin and Aliyev understand each other. The same influences that shaped Putin also molded Aliyev. Putin joined the KGB, the Soviet Union’s main security service, in 1975, and rose through the ranks before eventually becoming the chief of its successor, the Federal Security Service (FSB). Aliyev is nine years younger than Putin and was an academic in the final years of the Soviet Union, but he still grew up inculcated in the culture of the KGB. His father Heydar, who became president in 1993 and ended Azerbaijan’s nascent experiment with democracy, worked for the Soviet security apparatus – first in Azerbaijan’s Nakhchivan Autonomous Soviet Socialist Republic, and then rising through the ranks until he became Soviet Azerbaijan’s top KGB officer, a post he held for 13 years.

The similarities between Putin and the younger Aliyev are striking. Both deny the historical legitimacy of their neighbors. Shortly before Russia’s most recent invasion of Ukraine, Putin published an essay, “On the Historical Unity of Russians and Ukrainians,” in which he argued the Ukrainian people were not distinct from Russians. Even the name Ukraine, Putin argued, merely came from the Old Russian word okraina [periphery] and so “originally referred to frontier guards who protected the external [Russian] borders.”

“How can this heritage be divided between Russia and Ukraine? And why do it?” Putin asked. Those who said Ukraine was distinct relied on “all sorts of concoctions,” none legitimate. “Modern Ukraine is entirely the product of the Soviet era,” Putin asserted. “We know and remember well that it was shaped – for a significant part – on the lands of historical Russia.”

Ilham Aliyev patterned his denial of Armenia’s legitimacy on much the same grounds, essentially treating Putin’s speech as Mad Libs for irredentism. He speaks of a “united” Azerbaijan that would consist of the current Republic of Azerbaijan as well as modern day Armenia, which he calls “Western Azerbaijan;” Nagorno-Karabakh; and northwestern Iran, which he calls “Southern Azerbaijan.” Aliyev’s Dec. 24, 2022 speech complaining about foreign powers voiding legitimate Azerbaijani borders parallels Putin’s analysis of how Russia historically lost sovereignty over Ukraine.

Like Putin, Aliyev has moved his revisionism from the realm of rhetoric into that of doctrine. Meeting with assembled intellectuals last month, Aliyev declared, “Of course, our history books should be updated.” He also argued that Azerbaijan should sponsor “an international conference on Western Azerbaijan… once a year or every two years. We will invite scientists, archaeologists and historians from the countries we consider our friends so that we can hold a prestigious international conference.” In other words, he seeks an academic window dressing to propaganda. This is exactly what Putin did with the Valdai Discussion Club. “Western Azerbaijan is our historical land, which is established by a number of historical documents, historical maps and our history itself,” Aliyev has explained.

Aliyev’s revisionism goes beyond cherry-picking maps and documents. Azerbaijan-paid researchers and proxies argue that, all physical evidence aside, Armenian Christianity has no roots in Nagorno-Karabakh, but rather all artifacts from times past are either frauds or relics of the now-extinct Caucasian Albanian culture.

Aliyev goes even further than Putin in some respects as he sandblasts and bulldozes any physical evidence that contradicts his false narrative about the illegitimacy of Armenian presence in regions he now claims for Azerbaijan. Historians in Washington who shill for Aliyev despite such destruction embarrass themselves and set a precedent for other historical revisionists who destroy ancient heritage – be they the Palestinian Authority vis-à-vis Jewish roots in historical Palestine, the Taliban with regard to Buddhism in Afghanistan, or the Chinese Communist Party seeking to deny to Uighur and Tibetan presence in what today is Western China.

Putin’s essay made explicit threats against Kyiv, suggesting that the increasing pro-Western posture of Ukraine’s democratically elected government put Ukrainian statehood in peril. “All the subterfuges associated with the anti-Russia project are clear to us And we will never allow our historical territories and people close to us living there to be used against Russia,” Putin warned. Aliyev has made similar threats. “If revanchist forces emerge in Armenia again, they should know what awaits them,” he has argued in reference to Armenians who press a diplomatic claim to Nagorno-Karabakh or who respect the referendum in which residents of the region overwhelmingly voted for Armenian sovereignty.

Aliyev also adopted Putin’s argument that Ukrainian President Volodomyr Zelensky and his team serve foreign interests. “Behind the lies about Azerbaijan spread not only on the networks but also in many European and American media outlets,” Aliyev stated, “we see the long ears of the Armenian lobby, so to speak. So 90 percent of the articles are written by Armenians. They hide behind other names, but we know where it comes from and we must be ready for that.” Often, the demonization of the other extends into accusations that they are neo-Nazis. Putin has been explicit in this. The 2014 Maidan Revolution in Ukraine, he argued, led to the empowerment of “neo-Nazis and militarizing the country.” Azerbaijani outlets regularly make similar aspersions toward Armenia. AzerNews, for example, has accused one of the main Armenian lobby groups in the United States of being “neo-Nazi,” a calumny belied by the group’s frequent partnership with Jewish organization.

Signs of Wars to Come

Aliyev also follows Putin’s methods of justifying war. After 2014, Western diplomats hoped that Putin’s conquest of Crimea, Donetsk and Luhansk would satiate his revanchist appetite. In the same way, many Western diplomats believe that Aliyev will stop at Nagorno-Karabakh. His speeches and his embrace of Putin’s strategy suggest this is a delusion. Moreover, he has already sent Azerbaijani forces into Armenia proper, and his most recent speech presages another attack. “Let us work together on returning to Western Azerbaijan,” he said. “Now that the Karabakh conflict has been resolved, this is the issue on our agenda. Of course, it was premature to talk about it before the Karabakh conflict was resolved. But we should not waste any time now.”

History does not always repeat, but patterns emerge. The Ukraine crisis did not begin with Russian tanks rolling into the country, but months earlier, when Putin began laying down the intellectual and diplomatic justification for his aggression. The West may not have listened until it was too late, but Aliyev did. The question today is whether the White House, State Department, and European Union will repeat the same mistakes, or whether they will recognize Aliyev’s goal before it is made all too clear.

A 19FortyFive Contributing Editor, Michael Rubin is a senior fellow at the American Enterprise Institute, where he specializes in Iran, Turkey, and the broader Middle East. A former Pentagon official, Dr. Rubin has lived in post-revolution Iran, Yemen, and both pre- and postwar Iraq. He also spent time with the Taliban before 9/11. For more than a decade, he taught classes at sea about the Horn of Africa and Middle East conflicts, culture, and terrorism, to deployed US Navy and Marine units.