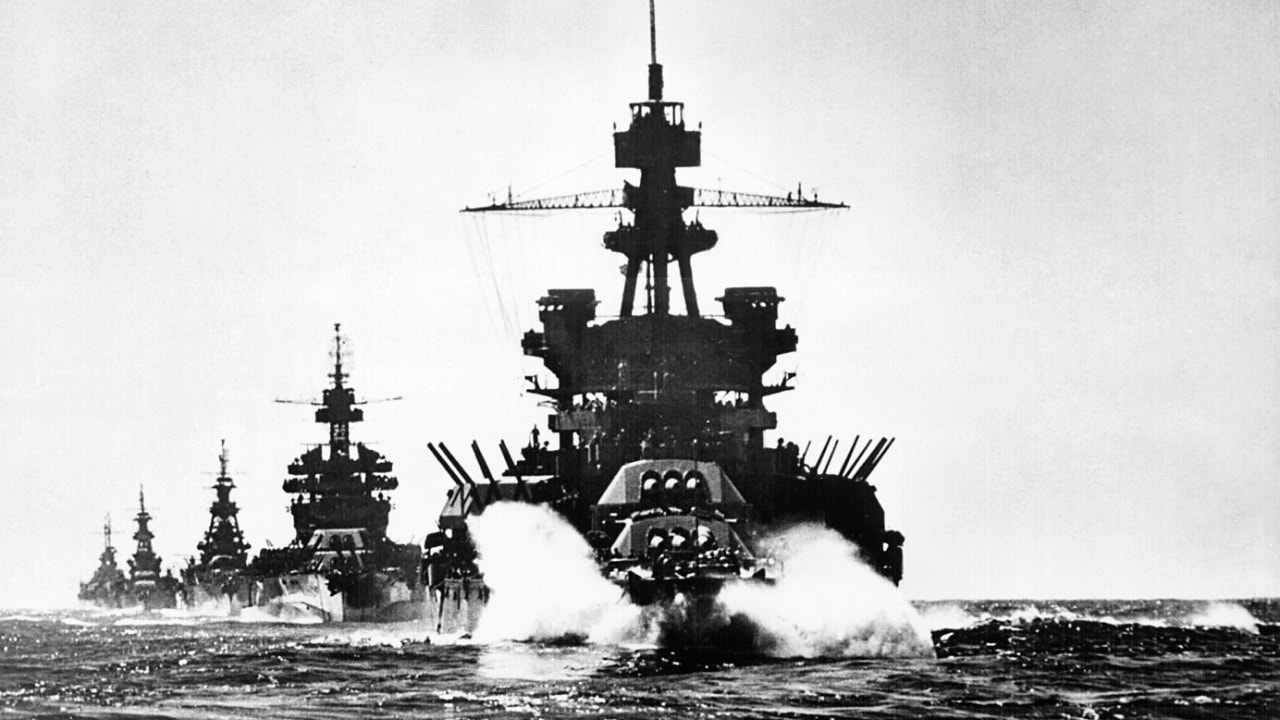 USS Pennsylvania, which was attacked at Pearl Harbor.

Suppose Robert E. Lee had laid hands on a shipment of AK-47s in 1864. How would American history have unfolded? Differently than it did, one imagines.

Historians frown on alt-history, and oftentimes for good reason. Change too many variables, and you veer speedily into fiction. The chain connecting cause to effect gets too diffuse to trace, and history loses all power to instruct. Change a major variable, especially in a fanciful way—for instance, positing that machine-gun-toting Confederates took the field against Ulysses S. Grant’s army at the Battle of the Wilderness—and the same fate befalls you. Good storytelling may teach little.

What if Japan had never attacked Pearl Harbor? Now that’s a question we can take on without running afoul of historical scruples. As long as we refrain from inserting nuclear-powered aircraft carriers sporting Tomcat fighters into our deliberations, at any rate.

When studying strategy, we commonly undertake a self-disciplined form of alt-history. Indeed, our courses in Newport and kindred educational institutes revolve around it. That’s how we learn from historical figures and events. Military sage Carl von Clausewitz recommends—nay, demands—that students of strategy take this approach. Rigor, not whimsy, is the standard that guides ventures in Clausewitzian “critical analysis.” Strategists critique the course of action a commander followed while proposing alternatives that may have better advanced operational and strategic goals.

Debating strategy and operations in hindsight is how we form the habit of thinking critically about present-day enterprises. Critical analysis, maintains Clausewitz, is “not just an evaluation of the means actually employed, but of all possible means—which first have to be formulated, that is, invented. One can, after all, not condemn a method without being able to suggest a better alternative.” The Prussian sage, then, scorns Monday-morning quarterbacking.

That demands intellectual self-discipline. “If the critic wishes to distribute praise or blame,” concludes Clausewitz, “he must certainly try to put himself exactly in the position of the commander; in other words, he must assemble everything the commander knew and all the motives that affected his decision, and ignore all that he could not or did not know, especially the outcome.” Critics know how a course of action worked out in retrospect. They must restrict themselves to what a commander actually knew in order to project some realistic alternative.

It doesn’t take too much imagination to postulate alternative strategies for Imperial Japan. Indeed, eminent Japanese have themselves postulated alternatives. My favorite: the high naval command should have stuck to its pre-1941 playbook. The Pearl Harbor carrier raid was a latecomer to Japanese naval strategy, and it was the handiwork of one man, Adm. Isoroku Yamamoto. Had Yamamoto declined to press the case for a Hawaiian strike, or had the high command rebuffed his entreaties, the Imperial Japanese Navy would have executed its longstanding strategy of “interceptive operations.”

In other words, it would have evicted U.S. forces from the Philippine Islands, seized Pacific islands and built airfields there, and employed air and submarine attacks to cut the U.S. Pacific Fleet down to size on its westward voyage to the Philippines’ relief. Interceptive operations would have culminated in a fleet battle somewhere in the Western Pacific. Japan would have stood a better chance of success had it done so. Its navy still would have struck American territory to open the war, but it would have done so in far less provocative fashion. In all likelihood, the American reaction would have proved more muted—and more manageable for Japan.

The Hollywood version of Yamamoto puts the result of Pearl Harbor well, prophesying in Tora! Tora! Tora! that “we have awakened a sleeping giant and filled him with a terrible resolve.” That’s a rich—and rather Clausewitzian—way of putting it. Clausewitz defines a combatant’s strength as a product of capability and willpower. Yamamoto alludes to the United States’ vast industrial and natural resources, depicting America as a giant in waiting. He also foretells that the strike on Battleship Row will enrage that giant—goading him into mobilizing those resources in bulk to smite Japan.

Assaulting the Philippines may have awakened the sleeping giant—but it’s doubtful it would have left him in such a merciless mood. He would have been groggy. Here’s Clausewitz again: the “value of the political object” governs the “magnitude” and “duration” of the effort a belligerent mounts to obtain that political object. How much a belligerent wants its political goals, that is, dictates how many resources—lives, national treasure, military hardware—it invests in an endeavor, and how long it sustains the investment.

The Philippine Islands constituted a lesser goal. The archipelago constituted American territory, having been annexed in the aftermath of the Spanish-American War of 1898. But the islands also lay on the far side of the Pacific Ocean, thousands of miles from American shores. And they had been absent from daily headlines since the days when imperialists like Theodore Roosevelt wrangled publicly with anti-imperialists like Mark Twain about the wisdom of annexation. Americans reportedly had to consult their atlases on December 7 to find out where Pearl Harbor was located. The Philippines barely registered in the popular consciousness—full stop.

Regaining the Philippines, then, would have represented a political object commanding mediocre value at best—especially when full-blown war raged in Europe and adjoining waters, beckoning to an America that had been Eurocentric since its founding. Chances are that the U.S. effort in the Pacific would have remained wholly defensive. The U.S. leadership would have concentrated resources and martial energy in the Atlantic theater—keeping its prewar promise to allied leaders in deed as well as in spirit.

Bypassing the Hawaiian Islands, in short, would have spared Japan a world of hurt—as Admiral Yamamoto foresaw. Forbearance would have granted Tokyo time to consolidate its gains in the Western Pacific, and perhaps empowered Japan’s navy and army to hold those gains against the tepid, belated U.S. counteroffensive that was likely to come.

Now, let’s give Yamamoto his due as a maritime strategist. His strategy was neither reckless nor stupid. Japanese mariners were avid readers of the works of Alfred Thayer Mahan, and going after the enemy fleet represents sound Mahanian doctrine. Crush the enemy fleet and you win “command of the sea.” Win maritime command and contested real estate dangles on the vine for you to pluck afterward. 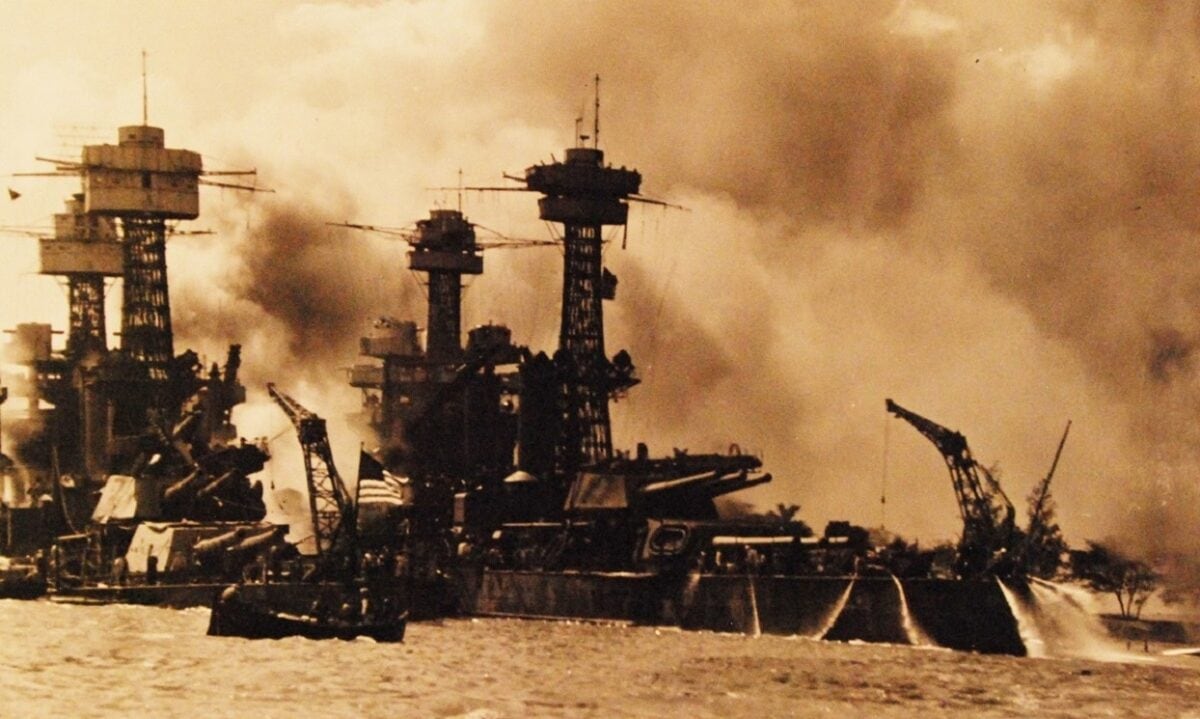 And indeed, the Mahanian approach did pay off for the Imperial Japanese Navy—for a time. Japanese warriors ran wild for six months after Pearl Harbor, scooping up conquest after conquest. But a vengeful giant can regenerate strength given adequate time. As Yamamoto himself predicted, Japan could entertain “no expectation of success” if the war dragged on longer than six months or a year.

Doing less—or forswearing an effort entirely—always constitutes a viable strategic option. Doing nothing was an option Japan should have exercised rather than assail Pearl Harbor. That’s the lesson from alt-history. 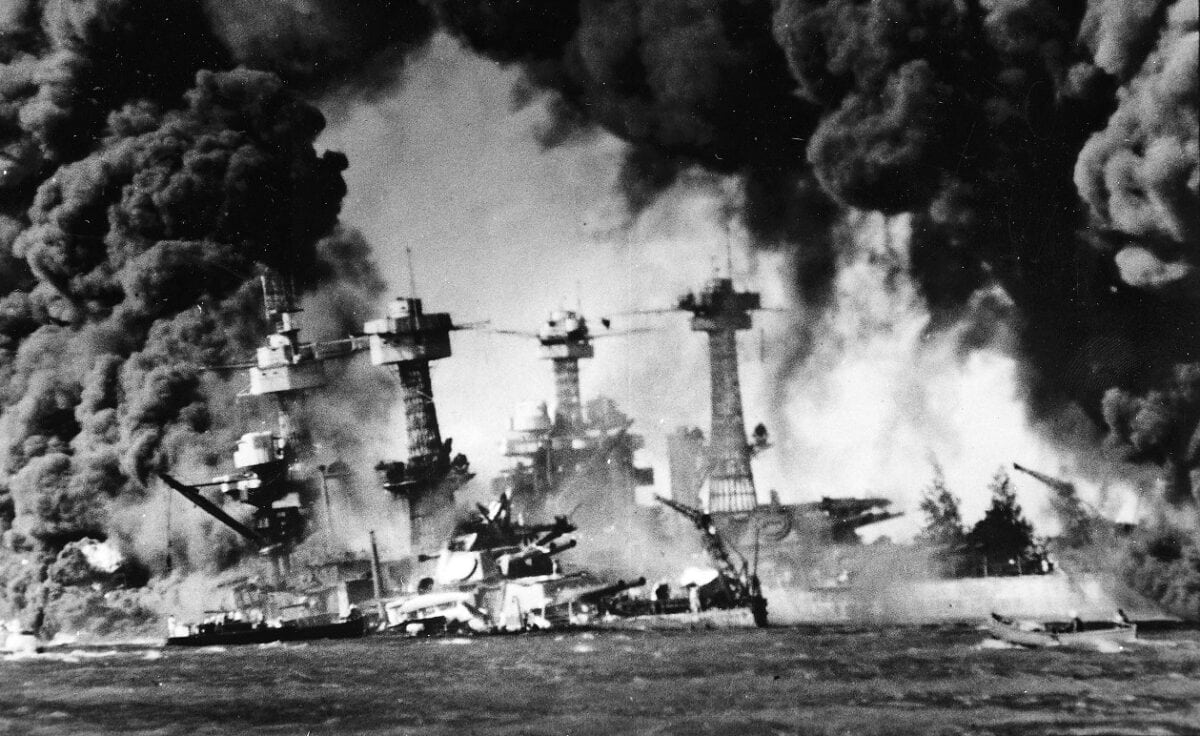 Battleship USS West Virginia sunk and burning at Pearl Harbor on Dec. 7, 1941. In background is the battleship USS Tennessee. 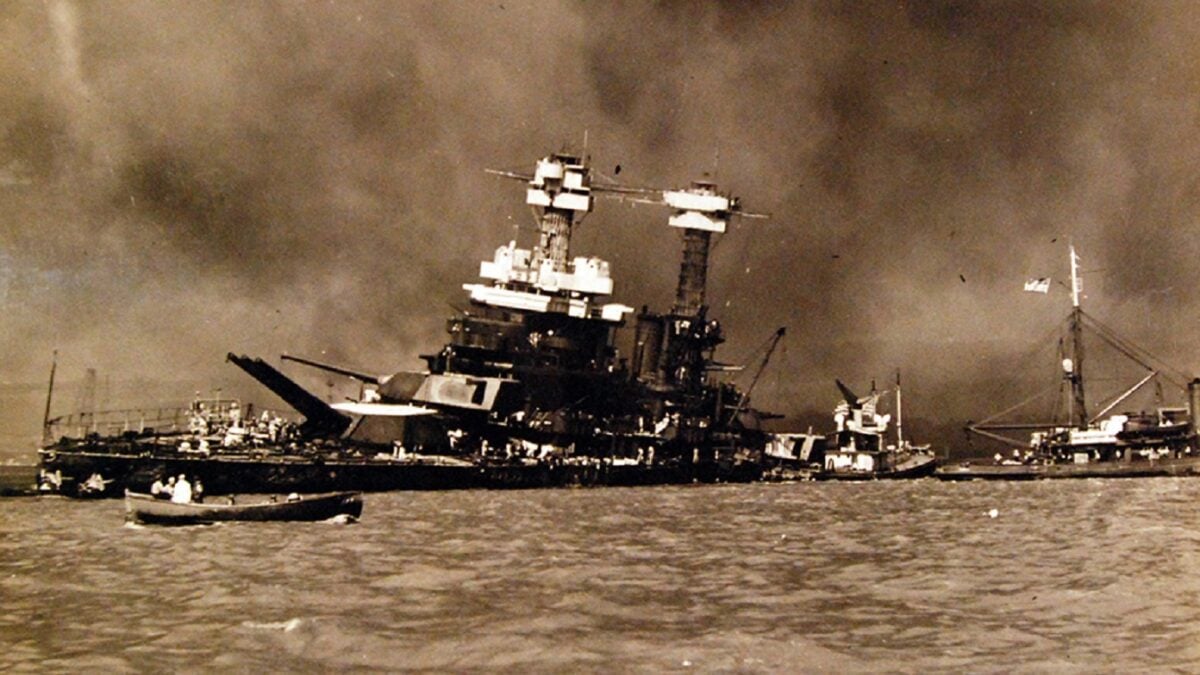 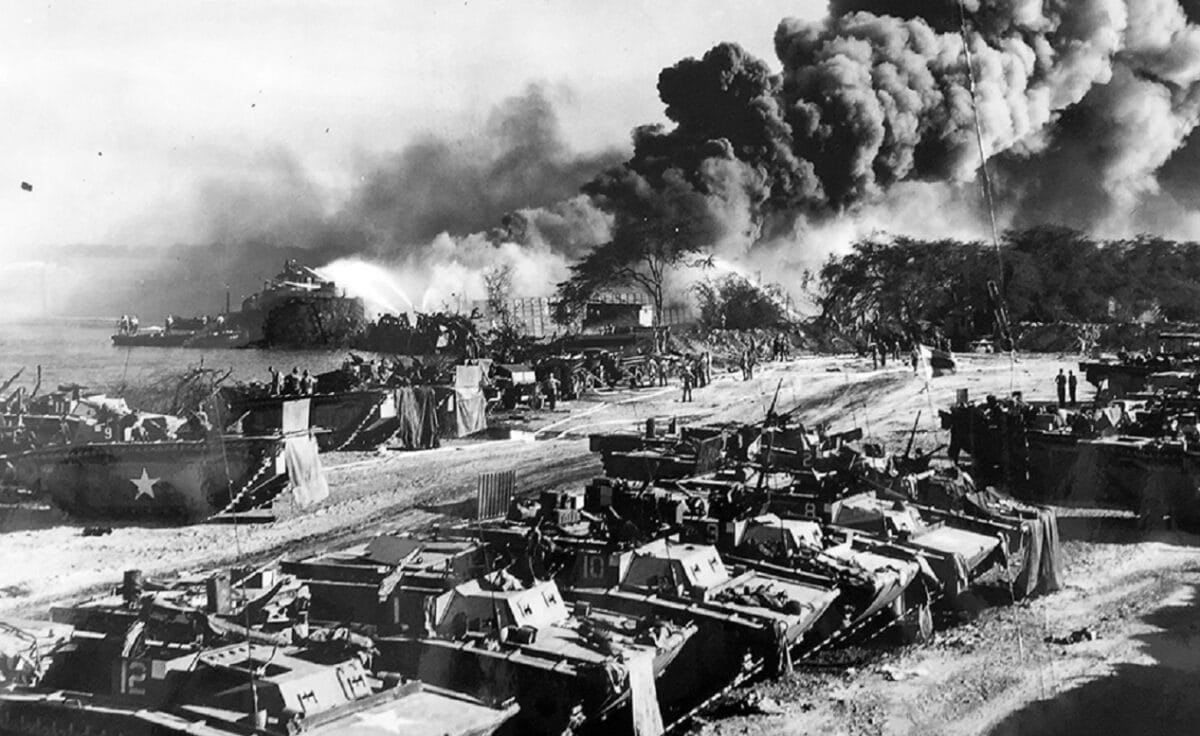 James Holmes is the inaugural holder of the J. C. Wylie Chair of Maritime Strategy at the U.S. Naval War College.