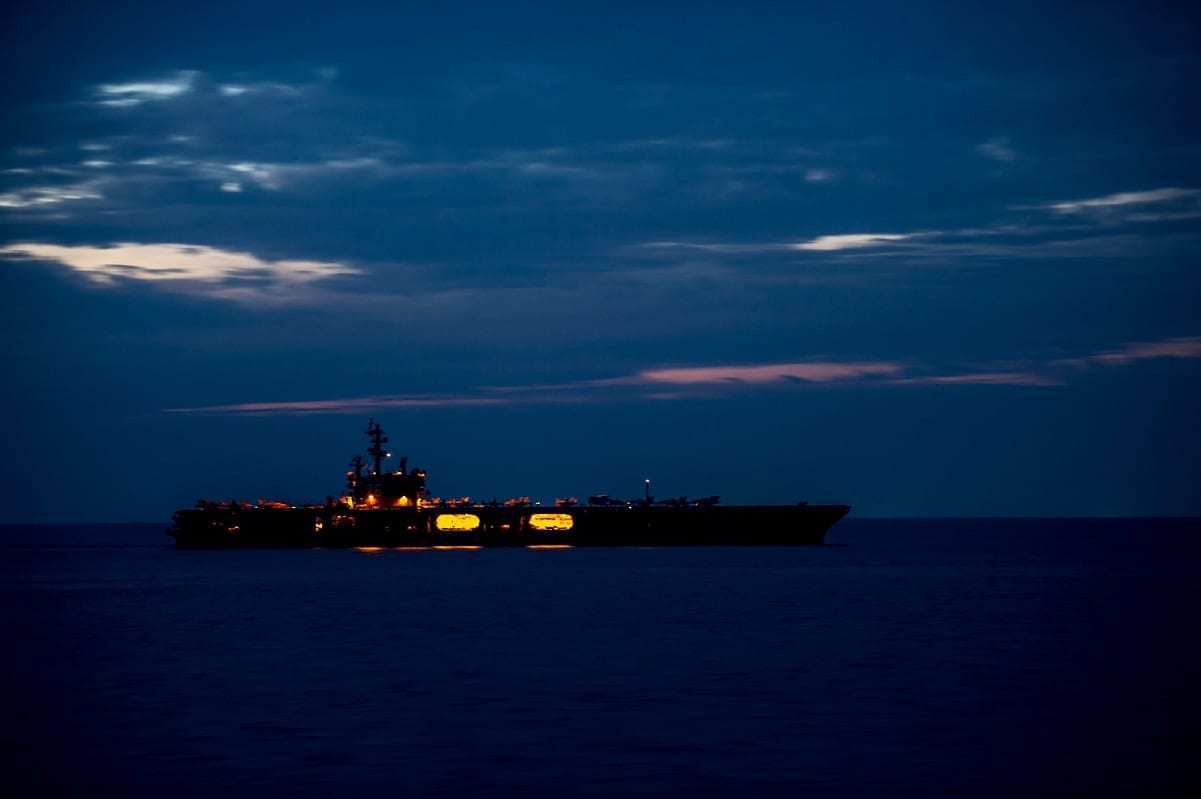 USS Ronald Reagan is underway off the coast of the Korean peninsula during exercise Invincible Spirit.

Last month, China dropped two advanced ballistic missiles–or as the media likes to call them, ‘aircraft-carrier killer missiles’–into the South China Sea. Supposedly equipped with “terminal maneuvering capabilities that enable them to target ships underway” (supposedly, because when it comes to China, who really knows?), the DF-21D and DF-26B missiles were portrayed as “carrier killers” both at home and abroad. Whether or not they could actually hit an aircraft carrier traveling at 30 knots (that’s 15 meters per second), taking evasive action, engaging in active jamming, and shooting back, no one knows. Hopefully, we’ll never find out.

When does a self-guided ballistic missile become a “carrier killer”? When it actually kills a carrier. Ballistic missiles are extraordinarily complex instruments, and smart ones even more so. China’s tests would be much more convincing if they hit, say, a towed platform. Even North Korea can drop a payload into the sea.

But the technical details are probably beside the point. American aircraft carriers will never be used to support an invasion of China, so there will probably never arise a scenario in which China has any reason to attempt to sink a US carrier. Claiming that a ballistic missile could sink a carrier is meaningless without giving a reason why that missile would be fired. After all, a submarine, a cruise missile, or a nuclear warhead could also sink a carrier. A carrier might even be sunk by a hacker hijacking its control systems.

Probably the single most likely Chinese instrument for sinking an American aircraft carrier would be a ship’s reinforced bow in an “accidental” ramming incident. It’s much easier to get close to a carrier in peacetime than in wartime, and China has a long history of irresponsible sailing. An unarmed icebreaker on the prowl could be much more dangerous than a nuclear missile that is never used.

When it comes to equipment effectiveness, use scenarios are everything. An aircraft carrier is wasted (and unnecessarily risked) on freedom of navigation operations (FONOPS); if the United States wants to keep running FONOPS against increasingly determined opposition, it should build a sturdy, heavily armored 21st-century battleship. Nor is an aircraft carrier any longer an instrument for ocean dominance; the era of carrier duels across the wide Pacific is long past. Today’s aircraft carriers are essentially mobile air reconnaissance and assault bases. They are used to project power from the sea, not over the sea.

If China really wanted to sink an American aircraft carrier in the South China Sea, a swarm of hundreds of cheap, conventional anti-ship cruise missiles would be much more effective than an experimental ballistic missile whose main purpose is to flout a treaty that China hasn’t signed. The real challenge isn’t sinking a carrier. It’s imagining a scenario under which China would be crazy enough to sink a carrier. Rammings and near-misses are actions just short of war that raises the cost of FONOPS without provoking armageddon. A direct missile attack would be something else entirely.

Granting that a Chinese missile attack on an American aircraft carrier would only occur if the two countries were engaged in at least a limited war, then the question must be asked: what American commander would be stupid enough to sail aircraft carriers through the South China Sea during a war with China? The answer, one hopes, is “none.” If China wants to bag an American carrier in time of war, it’s going to have to come looking for it in the broad Pacific. And given American air superiority, that’s still America’s home turf. The best China can hope for is to turn the South China Sea and the Taiwan Strait into an anti-access/area denial (A2/AD) no man’s land. And if it does so, that only thwarts China’s strategic goals, not America’s.