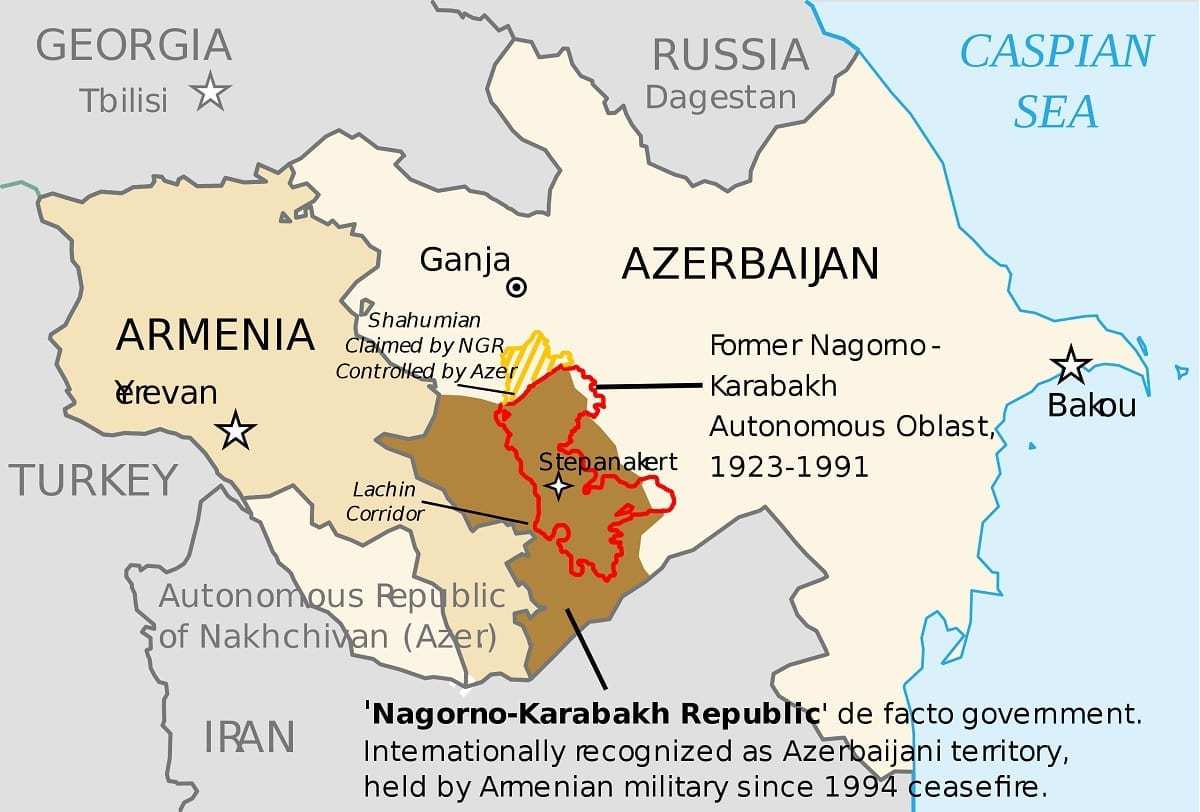 While claimed and internationally recognized as Azerbaijani land, the Nagorno-Karabakh Oblast was under the Soviet system an autonomous, ethnically Armenian enclave inside Azerbaijan. After the fall of the USSR a 3-year war erupted between Armenia and Azerbaijan over the land after the inhabitants of the NK Oblast declared independence from Azerbaijan, and Armenia signed a 1994 ceasefire having gained military control of both the former NK Oblast and the provinces to the south and west.

The recent outbreak of hostilities between Armenia and Azerbaijan may be competing for attention in a noisy press, but it has spawned a cottage industry of journalistic ‘explainers’ nonetheless. There are so many new trouble spots around the world today it is almost reassuring to see an old and familiar conflict rear up again. Given the sheer number of explainers, however, perhaps this war is less familiar than it ought to be as few seem to have much idea what is going on, or indeed why.

Any student of European politics or International Relations ought to know something about the dispute. Although long-frozen, the conflict initially erupted during the messy collapse of the Soviet Union as two hostile peoples newly released from Moscow’s vassalage sought to assert their rival claims to overlapping homelands. The fickle finger of Stalin is implicated in the confusion as his deliberate efforts to knit the Soviet Union together by redrawing boundaries and relocating whole peoples left a baleful legacy of pregnant conflict wherever the Red Flag once flew. In this instance, the predominantly Armenian population of Nagorno Karabakh, an ‘oblast’ or province within Azerbaijan, objected to being incorporated into the majority Muslim country. What’s more, the Armenians were strong enough to do something about it and benefited from Russian backing.

Today, 26 years after the first conflict reached an uneasy ceasefire with Armenia holding the disputed territory, the tables have turned. On the morning of the 27th of September, a notably stronger Azerbaijan commenced hostilities to force the issue, this time with Turkish backing. The precise timing may have been a surprise, but the war drums have been sounding for months, even years. Indeed this Crisis Group report from 2011 probably captures all the salient details even today. The proximate cause, therefore, is actually very well understood, but the war also needs its permissive context and its frame of reference.

Aside from the underlying grievances which inspire any specific war, war itself is deeply studied as a general phenomenon. The war between Armenia and Azerbaijan actually played a walk on part in a changing conception of war developed in the 1990s by Mary Kaldor, who used it as a case study. Kaldor was writing in the immediate post-Cold War period when it seemed as if grand strategic conflicts had all but ended. She sought a more convincing explanation for the rash of seemingly intractable post-Soviet wars that appeared to be different in nature to the type of interstate conflicts that had dominated the 20th Century. Her notion of ‘new wars’ moved the discussion about war away from traditional inter-state warfare towards more complex political struggles involving organized crime, clannish identity claims, and institutional instability that drew regional powers into increasingly irresolvable conflicts. Former Yugoslavia was another case study and both contexts bore comparison.

These insights about a new kind of warfare were developed also by others who conceived similar ideas about state failure and the de-monopolization of violence, which informed policy responses and novel conflict resolution strategies from the 1990s to 2010s. Usually, this involved internationalizing specific conflicts through the introduction of peacekeepers to reduce human rights violations and establishing mechanisms for the just resolution of political differences under the auspices of international organizations like the UN or the EU. In the case of the Bishkek Protocol which underwrote a provisional ceasefire between Armenia and Azerbaijan in 1994, the troops were Russian and the international organization was the OSCE. Arguably Russia, being a quasi-belligerent, was not the ideal mediator, but a decade previously they would have simply imposed an outcome within the Soviet Union so this marked an important evolution in the politics of the post-Soviet world; an acceptance that this was, in fact, an international conflict that needed international mediation.

What is striking, however, about the current outbreak of hostilities is that although the underlying conflict is familiar, it is spoken of rather differently now. Indeed, it seems that despite the continuing local complexity of the political situation there is no longer much enthusiasm for international intervention, without which the conflict will simply intensify until a different kind of resolution imposes itself through force of arms and direct negotiations between the belligerents. The conflict is no longer about organized crime, state failure, clannish identity politics which requires mediation and peacekeepers but is instead a theatre of great power competition and a brute contest of interstate rivalries, the very paradigm of warfare the first round of hostilities was supposed to have decisively undermined. Now the overriding question is which side to support? Which is not a remotely easy question to answer, but was once an unpardonable question to ask.

Turkey, Technology and the Failure of Russian ‘Piece-Keeping’

Having read a number of ‘explainers’, and not being a regional specialist, I am left wondering what exactly is being explained? The conflict itself is just as bitter as it ever was but there is little surprising or new about it. Indeed, arguably the conflict is quite well understood even if through a darkening lens of pessimism about the outcome. It doesn’t take any inside knowledge to see that Turkey has become much more assertive regionally, though it is interesting to consider how far they seem prepared to challenge Russia in their near abroad. Equally, all conflicts these days allow for new weapons systems to be tested which can subtly alter assumptions about military capabilities elsewhere. Accordingly, Turkey’s formidable capabilities with drone technology are being closely studied around the world.

Aside from these two developments though, perhaps the most important question surrounds the position Russia finds itself in. We have become so accustomed to seeing Putin as a master strategist and Russia as an irresistible military power, that its growing weaknesses are becoming the elephant in the room, of which we rarely speak.

The Bishkek protocol in 1994 saw Russia adopt the role of ‘peace-keeper’ at a time when it was working to adapt itself to a post-Cold War world but facing many serious challenges internally. The rise of Putin some years later saw internal stabilization and the adaptation of Russia’s ‘peace-keeping’ role in the near abroad into what some have termed a deliberate policy of ‘piece-keeping.’ This describes the manner in which Russia exerts influence by threatening to destabilize post-Soviet states through sponsorship of separatist enclaves. Georgia, Ukraine, Moldova have all experienced this treatment in recent years. But the success of this policy is premised on Russia retaining a broadly free hand as the only foreign power able to intervene in these states, and is twinned with Russia’s fierce opposition to the expansion of NATO; no one came to Georgia’s aid, for example.

With Turkey’s overt support for Azerbaijan, however, this policy could be breaking down. Looking more widely, China’s growing challenge in Central Asia (notice the recent events in Kyrgyzstan) and the collapse of Lukashenko’s authority in Belarus make this a bad year for Russia’s role as the central arbiter of affairs in the post-Soviet space. Indeed it may be that Russia’s strategy of keeping pieces, has simply made it impossible for them to keep the peace.

Since 1994, there have been many violent clashes between Armenia and Azerbaijan, though recent events are of a different order of magnitude, but there is nothing fundamentally different about the underlying struggle. It remains at root a territorial dispute between historically antagonistic peoples whose histories are invariably bound up with one empire or another, be it Ottoman, Persian or Russian. What has changed is the context in which this current outbreak of hostilities is taking place. So while the many ‘explainers’ in the press are ostensibly about Armenia and Azerbaijan, they are in fact about how we conceive of war in the region and in the wider world.

In the 1990s, the conflict was interpreted as part of the backwash from the triumph of liberal democracy and the end of ideology. It was a problem to be managed through economic development and security provision. A consequence of weak states failing to govern properly falling victim to ancient hatreds, irrational ideologies, and organised crime. In 2020 the conflict is no longer a matter of failed states, but comprehensible in terms of strategic aspirations of capable, powerful states. Underneath both contexts is the same conflict and the same animosities.

The reason for the sheer number of ‘explainers’ that have been published is not because people don’t understand the conflict, but because the world is changing in ways that seem profound yet poorly understood. I would argue that these explainers are not even inspired by the incomprehensibility of the conflict, but by the incomprehension of the authors and the publishing editors at the prospect of a changing world, in which peacekeepers are no longer coming, and power speaks louder than bombs.