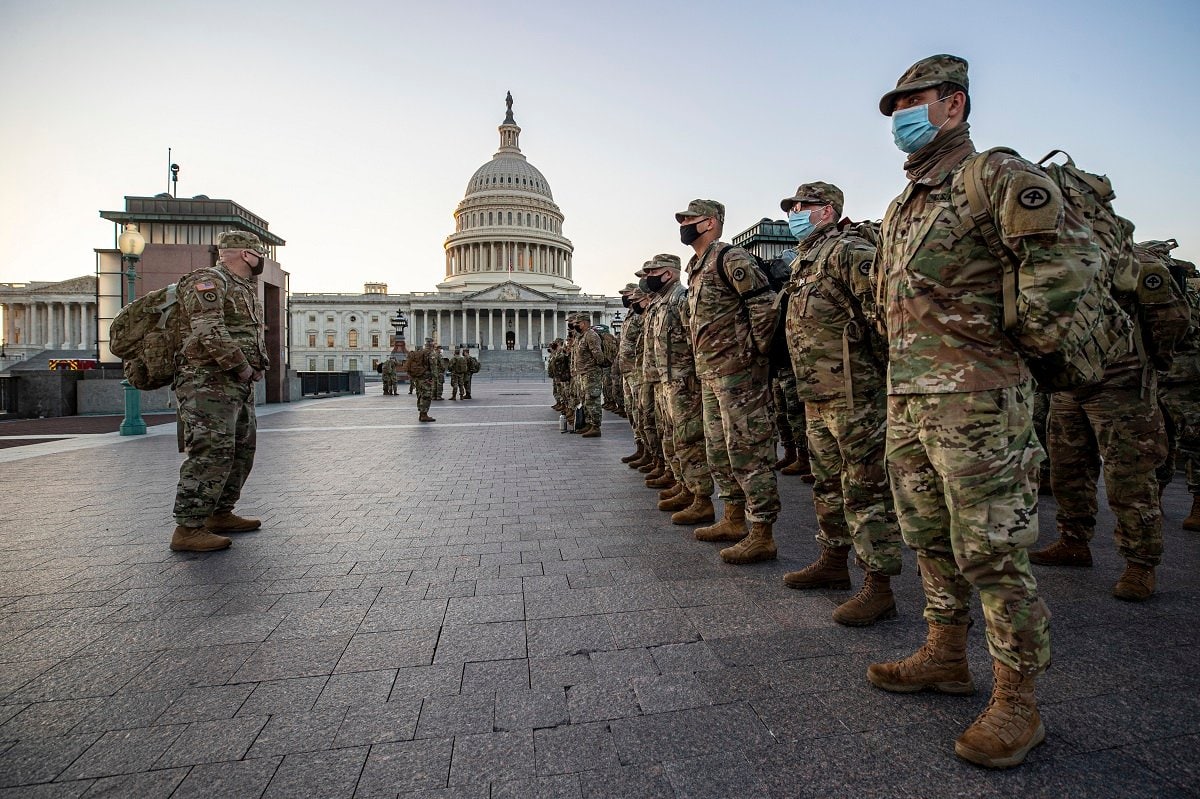 Many in the United States today are viewing the Capitol Building attack on 6 January as an unfortunate, but largely isolated incident. Donald Trump will no longer be in the White House and, many believe, life will mostly return to normal in the coming months. A closer examination of the evidence, however, suggests that to the contrary, unless decisive action is taken – quickly – the attack may well prove to have been the opening rounds of increasing instability and violence.

America is quickly devolving not simply into two, tribal political poles, but into two camps that are growing dangerously hostile towards one another. Some of the more earnest advocates of each side are increasingly comfortable with violence as a means of attaining their political objectives and accepting of otherwise unlawful tactics their side employs – while condemning “the other side” for taking the same action. This duplicity is serving to further exacerbate the gulf between the two sides – and radicalizing each against the other.

A turbulent 2020 saw a number of sustained protests and riots around the country, spawned in large measure by several cases involving white police officers shooting black men. For many in the black community, these incidents resulted in massive protests because of pressures that had been building for many years.  The Black Lives Matter (BLM) movement surged in this environment and has become a national rallying cry.

Many white Americans, at the same time, felt that they were being unfairly tarnished with such claims. Yes, they often admitted, there were some “bad apples” in some departments, but they were isolated events and not evidence of systemic racism. In response, counter-ideas were spawned like Blue Lives Matter and All Lives Matter. 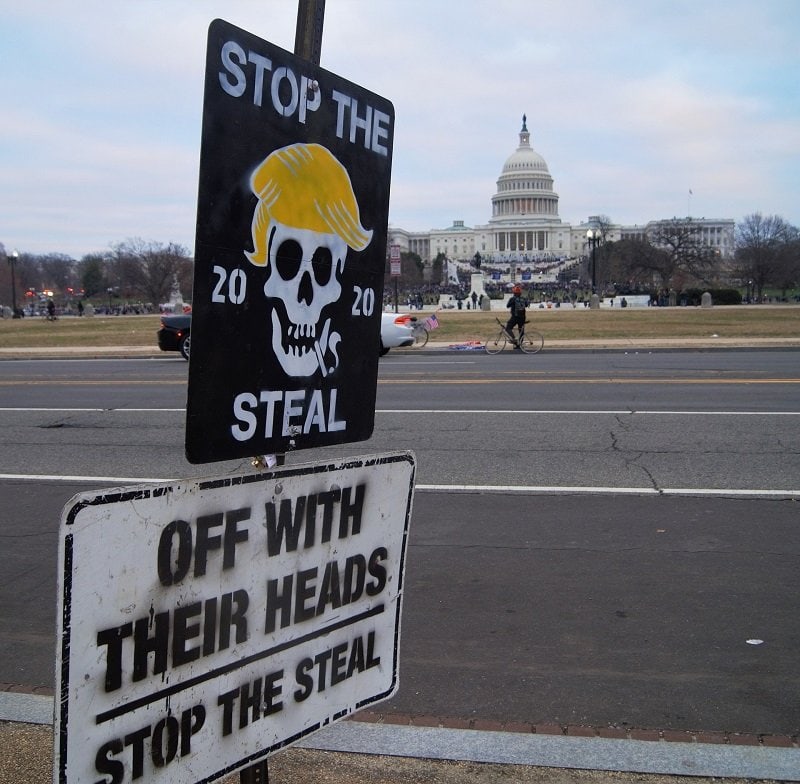 Stop the Steal signs seen in front of the Capitol. Image: Creative Commons.

To those who supported BLM – and this included not just black Americans but other minorities and considerable numbers of white Americans – the protests following the death of George Floyd were justified; the violence and destruction that followed, understandable. From their point of view, the injustice of the situation – and many others that had proceeded it – justified the actions that followed.

Democratic Attorney General for Massachusetts, Maura Healey, went too far as to flippantly say, “Yes, America is burning, but that’s how forests grow,” giving a pass to those who broke the law during the riots – and implicitly condoning future lawlessness.

Republicans were quick to condemn the violence and accused the Democrats of fomenting anarchy. “Democrat-run cities across this country are being overrun by violent mobs,” countered Republican governor Kristi Noem. “The violence is rampant. There’s looting, chaos, destruction, and murder.” When the venue changed and the violence resulted from a conservative protest, however, both sides exchanged places.

The Democrats were then quick to condemn the protester violence as inappropriate. There was a big difference, many Democrats claimed, between the George Floyd protests and those at the Capitol. The reality, however, is that the difference is in the eye of the beholder.

BLM supporters are adamant that the injustices perpetrated against many Black Americans are a violation of their basic human rights; if some protesters got carried away during the protests, that’s understandable. Many among the January 6th riot at the Capitol were powerfully convinced Democracy itself was being stolen from them and that any price was worth paying to defend it.

My intent is neither to condemn nor justify either side of this growing divide. Rather it is to highlight a real and growing danger to all Americans that is emerging from this large and growing contempt many on the right and left have each other.

One of the greatest reasons for alarm is that in the past number of years growing numbers of adherents on both the right and left are comfortable with violence being used to attain political objectives. A staggering 45% of Republicans polled after the Capitol attack said they supported the riot and believed it was justified – even knowing that five people had been killed.

Prior to the 2020 election, POLITICO reported that 41% of Democrats believed there would be “at least a little” justification for violence if Biden had lost. The numbers of each side willing to contemplate violence to ensure things work out their way should send chills down the backs of every American.

As has been widely reported, law enforcement officials are reporting multiple threats of violence at Biden’s inauguration on the 20th. In response, more than 20,000 members of the National Guard and thousands of uniformed police officers will be providing security. Most likely that much firepower will dissuade any would-be attackers. As history darkly warns, however, the conclusion of the Capitol riots will not end the risk of violent extremism in America.

In 1923 Adolf Hitler led an angry, ill-disciplined mob in a coup attempt in Munich. His effort failed and he was jailed. The anger and sense of victimhood among many in the population, however, continued to grow even after the coup’s failure. He manipulated and fed the sense of betrayal and anger among his followers to win power in 1933.

In 1953 Fidel Castro led an ill-trained mob in attempting a violent takeover in Cuba by seizing the Moncada Barracks. The government successfully put down the rebellion, Castro was convicted, and eventually fled the country.  The anger and sense of betrayal felt by the people he led only continued to grow, however, and in 1959 Castro road the rising anger and succeeded in violently overthrowing the government.

Even in our own country, abolitionist John Brown sought to spark an insurrection against slavery with an attack on the armory at Harper’s Ferry in 1859. A strong government military response defeated Brown’s rebellion and he was later executed. The rebellion Brown sought to spark, however, did materialize four years later with the start of the Civil War. The situation in America today is not exactly like any of these three historical examples, but there are enough troubling similarities that serve as a stern warning.

Like each of the above examples, the assault at the Capitol did not achieve the objectives of the most radical elements: overturning the election results. But also like all the above, the anger and fear that animated the attack has not been quelled. The New York Times reported that some Trump loyalists are “enraged by their failure to overturn the presidential election” and have posted online how-to manuals for “waging guerrilla warfare.”

On January 13th, the Department of Homeland Security issued a Joint Intelligence Bulletin which warned that the attack on the Capitol Building will likely result in “a significant driver of violence for a diverse set of domestic violent extremists.” Left unaddressed, this toxic and expanding violent mindset will only grow.

The real fear is that the leaders of these various groupings will move underground, perhaps into the dark web where its difficult for law enforcement to track them, and refine their tactics. Based on their experience and lessons learned they may, in the future, conspire to carry out acts of violence on American soil and succeed.

Or they might choose instead to adopt tactics adopted by previous nationalistic groups who felt maligned – like the Irish Republican Army’s “The Troubles” – and engage in a violent terror campaign to try and force the government to acquiesce to their demands. If government leaders hope this goes away merely by jailing those who broke the law, the risk of a dark season arising for our country increases.

What Must Be Done

Like everything, resolving this situation starts and ends with leadership. Democratic leaders cannot merely gloat over their electoral wins. If the Biden Administration and the Democrat-led House and Senate are seen to merely demonize the right while ignoring any of their concerns, the forces that led to the explosion on January 6th will likely continue to build.

If the Republican leadership succumbs to the temptation that frequently afflicts the minority party and seeks to reflexively obstruct the Democrats, fan the flames of victimhood by the GOP base, and continues to tell them the 2020 election was stolen, the chances of future violence will likewise increase.

Conducting something like emergency political triage is the first order of business.  Senior leaders of both parties must make a public display that both sides agree that the needs of the nation supersede the preferences of either party. They don’t have to love each other, and neither side has to cease working to enacting its core values, but they do have to stop – immediately – demonizing the other.

Republicans have to stop feeding the belief that the 2020 election was stolen, stop claiming that a Democrat-run Congress and Administration will “destroy” our country and make it socialist, and make good faith efforts to work with the other side. The Democrats must likewise cease to characterize anyone on the right that supported Trump as a danger to the country, must stop the general demonization of the right, and also work cooperatively with conservatives where interests align.

These are merely the first steps that must be taken right away to temper the raw, angry mistrust and hatred that many on each side have for the other. It has taken decades of progressively worsening relations between the Democrat and Republican parties to get to this sad state and it will take years of hard, frustrating and sustained effort to reverse the damage. The cost of failing to try, however, could condemn our Republic to eventually succumbing to a darkness from which we may never fully recover.