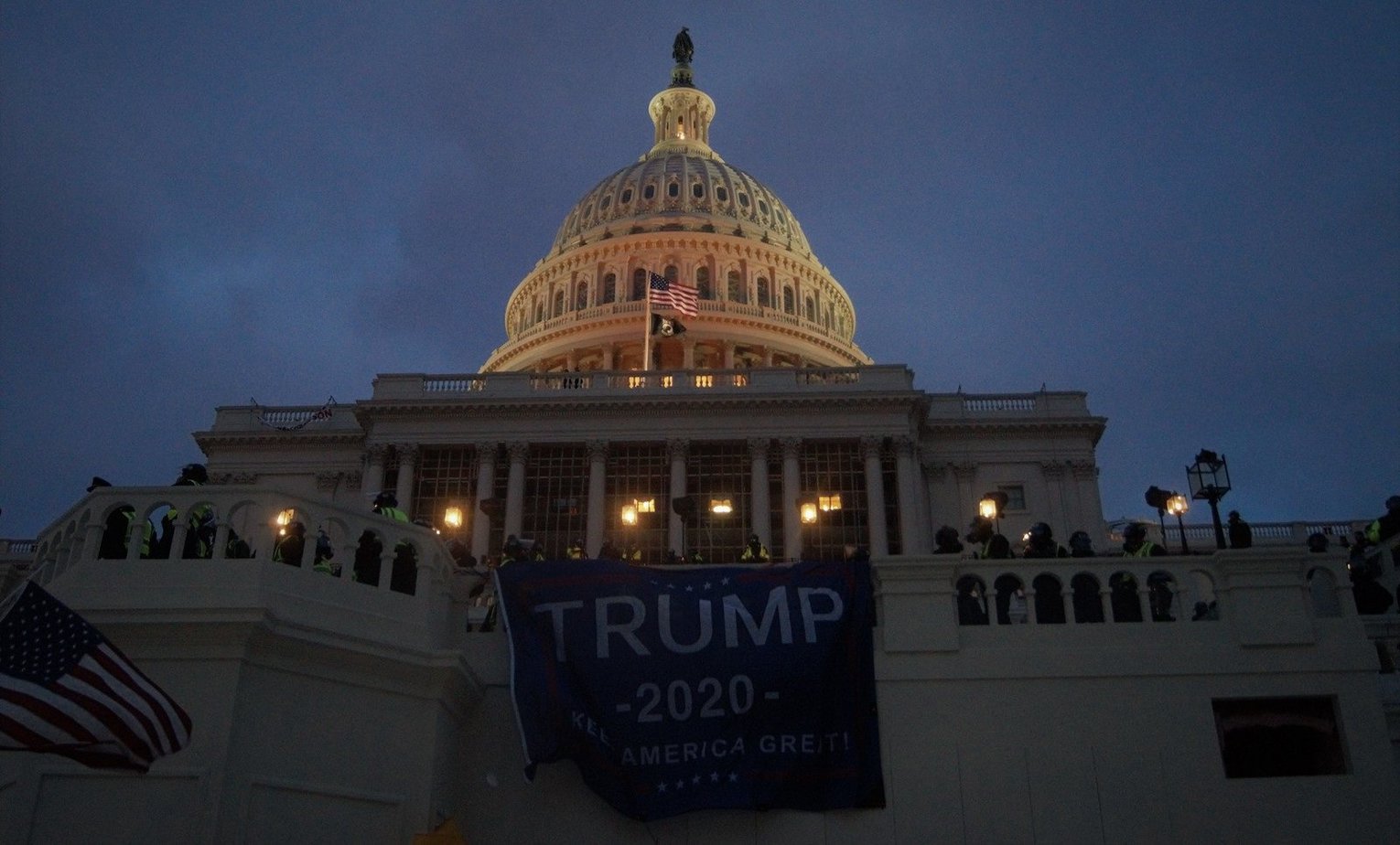 Night falls on January 6th at the Capitol Building. Image by Ashli Babbitt.

There is blood on the floor of the People’s House, the blood of Ashli Babbitt, an American hero.

She is the only hero of January 6, a woman killed for her country. It may be “sweet and fitting” to die for one’s country, but it is horrible to be killed by one’s country. If Congress has a conscience, it will place a statue of Ashli Babbitt on Capitol Hill, and a plaque at the spot where their police gunned her down.

Donald Trump must bear the blame for four years of fanning the fire of partisan distrust in America. As the President of the United States, he had a responsibility to stop campaigning and start governing the day he took the oath of office. But Trump is not responsible for the killing of Ashli Babbitt.

Leading Democrats, Democratic Party activists, and (worse) their intellectual allies in the universities and the press have spent four years labeling Trump and his supporters “racists” and “fascists.” They threw the whole force of the security state into an investigation of Trump’s election campaign and then refused to accept the results of that investigation when it cleared him. They accused the President of abuse of power and impeached him for a phone call.

They strategically and intentionally created a narrative atmosphere in which extra-legal “resistance” to Trump was justified by the supposed sheer evil of their beloathed bête noire. They elevated the self-proclaimed “Antifa” to the level of real anti-fascists. They legitimated arson, looting, and vigilantism, as long as it was anti-Trump. It’s a miracle that Trump wasn’t assassinated. As a private citizen, he will be a target for the rest of his life. 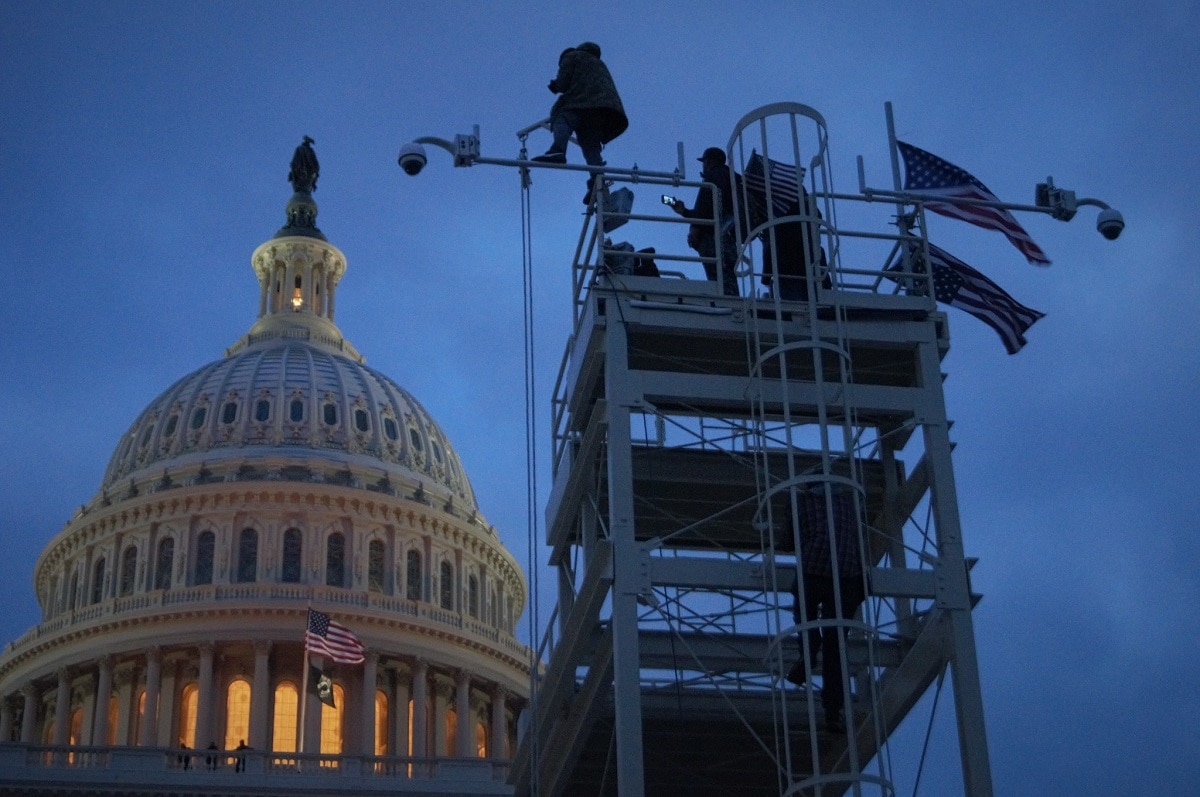 Night falls on January 6th at the Capitol. Image by Tyler Merbler.

Ashli Babbitt wasn’t shot because she poked her head through a broken window in the Capitol building. She was shot because Trump’s opponents dehumanized her and the 75 million other Americans who voted for Donald Trump. From Hillary Clinton’s “basket of deplorables” comment all the way through to their reactions on January 6, they cast Trump’s supporters as not only wrong-headed, but positively un-American. And they convinced the mainstream media to go along with them.

President-elect Joe Biden, soon to command the nation’s armed forces, called the Capitol occupation a “siege” that “borders on sedition,” a literal “insurrection.” The media chimed in with language about rioters storming the Capitol. And the protesters did in fact break laws, vandalize government property, and behave disreputably. But the double-standards applied by the Democrats and the media are breathtaking. “Police Kill Unarmed Woman in Mostly Peaceful Protests” is the headline for which we wait in vain.

The Democrats and their never-Trumper Republican allies have spent four years attacking the Presidency, and even the Constitution itself, in their sanctimoniously self-righteous crusade to remove him from office — and that, after trying but failing to prevent him from taking office in the first place. If Trump undermined the due process of the 2020 election, he was only following the example set by his opponents, who staged an all-out campaign to persuade Trump’s electors to break their legally-mandated pledges in 2016.

Tit for tat is no way to run a democracy. Joe Biden in his November victory speech said that it was “time to put away the harsh rhetoric, lower the temperature, see each other again, listen to each other again and to make progress.” He said that we “have to stop treating our opponents as our enemies, to “let this grim era of demonization in America begin to end here and now.”

That was then. This is now. Now his opponents are “a small number of extremists dedicated to lawlessness” who “do not reflect a true America.” But if Ashli Babbitt wasn’t a citizen of Biden’s America, who is?

When Donald Trump behaved in a dictatorial manner, we could always count on the courts, the Congress, the civil service, and the paladins of the fourth estate to keep him in line. Trump was a blusterer and a bully, but thoroughly hemmed in by the permanent institutions of government. He chafed at the limitations placed on his power, but never transgressed them.

Joe Biden takes office with the institutions of government firmly behind him, and both houses of Congress to boot. He faces strong partisan pressure to pack the Supreme Court, too. Will he fall prey to his own rhetoric that the Trump presidency was an historical aberration and that “the work of the next four years must be the restoration of democracy”? If he does, who will be his checks and balances?

History is a bloody record of the excesses of people who were so certain of their moral superiority that they were prepared to kill anyone who dared to disagree with them. The Trump Republicans may shockingly carry their oversized weapons in public, but it’s the Biden Democrats who seem ruthlessly ready to use the full force of the state against their opponents. Their unapologetic support for the killing of Ashli Babbitt is worrisome. Their unsympathetic apathy for the death of Ashli Babbitt is worse than unamerican. It is inhuman.