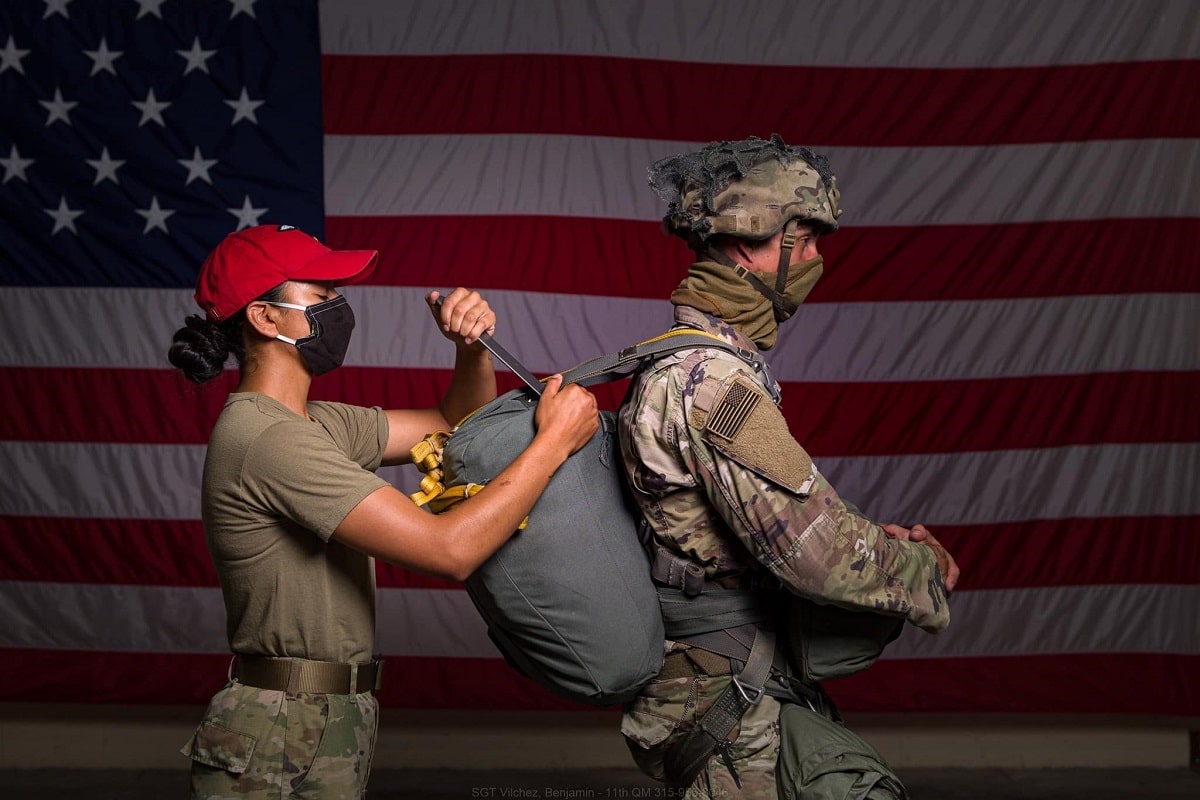 A Soldier assists in the laborious and delicate art of rigging and packing a parachute. (U.S. Army photo by Sgt. Benjamin Vilchez).

When a report comes out of Washington that has been co-authored by a who’s who group of, among others, former Secretaries of Defense, Chairmen of the Joint Chiefs of Staff, Ambassadors, and U.S. Senators, it’s a good bet the results are solid. Unfortunately, in the case of the recently released Afghan Study Group’s report to Congress, this stable full of eminent members produced a policy paper that, if followed, would replicate the previous 20 years of costly, failed war – and cement that failure well into the future.

The congressionally mandated study group was formed in April 2020 with the charge to, “consider the implications of [President Trump’s February 2020] peace settlement, or the failure to reach a settlement, on U.S. policy, resources, and commitments in Afghanistan” and then make policy recommendations for Congress and the new Administration.

That is an appropriate charter, and those areas of study are factors Congress and the White House need to consider. Regrettably, however, the commission was filled with many of the very architects of America’s failed Afghan policies of the past two decades.

Their “new” recommendations look disturbingly similar to the policies that produced so much failure over the past two decades. Fortunately, there are superior, logic-based alternatives available to the Biden Administration for implementation.

Though there are many problems with the Afghan Study Group report, none are more alarming than the first of the group’s five “suite of comprehensive actions.” For any strategy to be useful to the United States, the declared end state must be achievable, cost-effective, and result in a benefit for the United States. The end state offered by the Afghan Study Group meets none of these requirements.

The criteria they propose would effectively guarantee the failure of the past 20 years would be extended into perpetuity.  The reason: the authors state the war can only end when a number of virtually impossible tasks have been accomplished.

For example, they suggest the U.S. must continue to fight until the emergence of an “independent, democratic, and sovereign Afghan state with the governance, stability, and security forces to prevent al-Qaeda…and other terrorist groups from attacking the United States and its allies and to contain other potential challenges to U.S. and allied security and interests, including those associated with illicit narcotics.”

More than 20 years since the initial fall of the Taliban, however, the Afghan government remains a fractious, corrupt administration that has thus far proven incapable of producing credible governance. Their national security forces have control of less than half its own territory, and despite more than nearly two decades of concerted effort, Afghanistan remains the world’s leading producer of illicit narcotics. These outcomes should have caught none of these authors by surprise.

Almost 12 years ago, before then-President Obama made the decision to launch the Afghan surge, I published a study in which I observed that, “in a world without constraints, the United States government would desire to defeat the Taliban, fully eradicate the al Qaeda network, establish a functioning democratic government, introduce a sustainable economy, provide for women’s rights… and leave Afghanistan in the near future as a viable state, able and willing to live with its neighbors in peace.” The world, however, was very much constrained.

What I argued we must avoid at all costs, however, was the danger of falling “victim to the belief that we can accomplish in Afghanistan whatever we want simply by declaring our intentions.” That warning was as sound in 2009 as it is today. If we are to avoid another 12 years of predictable failure in Afghanistan, we must reject the same strategies that have failed for decades and make a clean break with the past.

First, we have to acknowledge that American combat power has never, does not now, and never will produce a military victory in Afghanistan. The problems in Afghanistan are primarily political and cultural in nature and involve multiple groups within Afghanistan and other states in the region. The ones who must live with the outcome are the only ones who can bring this war to an end.

Second, American national security is not dependent on keeping U.S. troops on the ground in Afghanistan. Our security from terrorist attacks worldwide is preserved by our global intelligence, surveillance, and reconnaissance capacity, paired with an unmatched ability to project power to strike any direct threat to our country, regardless of where the threat emerges.

There was never a requirement for the parties to reach a final settlement prior to our departure. Unilaterally changing that deal now runs the risk of making American troops once again the target of Taliban attacks. We should not sacrifice the live or limb of one single additional American troop to an unnecessary war.

As critical, so long as the U.S. military continues to guarantee the security of the Afghan government, Kabul will be less willing to make the hard compromises necessary to reach a negotiated settlement with the Taliban. We have given our best and brightest – and hundreds of billions of our citizens’ dollars – for two decades. It is time for those who live in and around Afghanistan to take the final responsibility for ending this war.