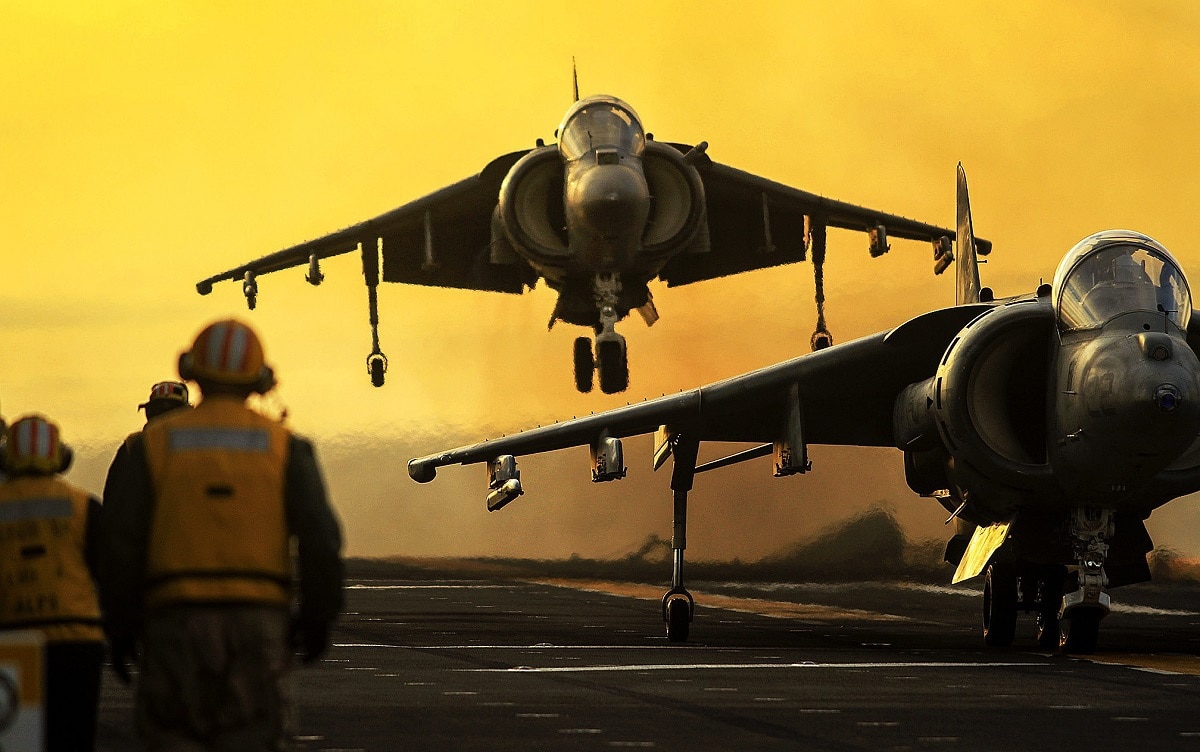 Last month the U.S. Navy and Marine Corps released a joint Unmanned Campaign Framework detailing how the sea services intend to design, build, test, and field unmanned aerial, surface, and subsurface vehicles to help execute the family of strategic and operational concepts that have issued forth from the Pentagon in recent years. These concepts bear titles like Triservice Maritime Strategy, Distributed Maritime Operations, and Expeditionary Advanced Base Operations. The Unmanned Campaign Framework is a solid document, well worth any gimlet-eyed seafarer’s time.

Accolades aside, the framework’s drafters commit one cardinal sin: they bury the lede. The lede is journalist-speak for the bottom line, or central message, in a piece of writing. Journalists put the bottom line up front to grab attention and to make sure they get their main point across even if the reader doesn’t read past the opener. Burying it deep within a text represents a missed opportunity to sway others. The Unmanned Campaign Framework’s authors disclose the lede only on page 27 of a 33-page document (not counting an appendix and glossary), and leave it encrusted in technospeak even then.

That’s why it’s worth spotlighting here. On that page, sea-service magnates advance a hypothesis, namely that unmanned systems promise to help maritime forces accomplish their mission “through unlocking constraints on manned systems.” It seems the chief virtue of a family of unmanned systems isn’t leap-ahead technology. It’s that they have no crews, and thus are unbound by the demands and resources necessary to field and operate manned aircraft, surface ships, and submarines. That encapsulates all of the other claims put forward in the Unmanned Campaign Framework on behalf of unmanned systems.

The document’s authors vow to put that hypothesis to the test through fleet experiments and exercises to determine whether it’s wholly or partly correct. Now that’s a core idea you can get your mind around. It also hands taxpayers, lawmakers, and the armed services themselves a yardstick to evaluate whether unmanned systems will transform naval operations—or are just auxiliary systems that help the fleet do better what it already knows how to do. American mariners once thought of aircraft carriers as the “eyes of the fleet,” scouts that could find enemy fleets and spot battleship gunfire. They were subordinates and enablers. Only later, with advances in aviation and weapons technology, did flattops take their place as the fleet’s premier capital ships.

Are unmanned systems the latter-day equivalent to the eyes of the fleet, or are they a game-changer?

Time will tell. In peacetime, it’s hard to determine whether newfangled technology will fulfill its promise. After all, battle issues the final verdict on what does and doesn’t work during wartime interaction with some foe, and by definition, battles don’t take place in peacetime. Carriers are not the only inventions to transform the character of seaborne combat. For instance, historian Julian Corbett bemoaned the advent of torpedo- and sea-mine-armed small craft around the turn of the 20th century. He saw superempowered vessels of this ilk—torpedo boats and rudimentary submarines—as the vanguard of a “historical revolution” that confounded naval strategists of the day, himself included.

After all, these were light craft that could do grave damage to battleships and other capital ships of the steam age. They turned naval commanders’ world upside down.

Maybe unmanned systems offer their proprietors operational and strategic advantages of comparable magnitude; maybe not. That’s why the Unmanned Campaign Framework’s repeated statements of fealty to the scientific method are refreshing, as is CNO Gilday’s oblique acknowledgment that service chieftains are “mindful of past shortcomings” in weapons development and have rededicated themselves to a “deliberate” if “urgent” approach to this endeavor. An experimental mindset is a must. In fact, the document’s framers go so far as to quote Rear Admiral Wayne Meyer’s credo: “build a little, test a little, learn a lot.”

These are words to live by—and, indeed, to tattoo on sea-service culture. Meyer is known as the forefather of the Aegis combat system, the state of the art in fleet air and missile defense from the early 1980s till this day. Conjuring him up in an official statement of purpose makes a powerful proclamation.

Let’s briefly review some of the claims put forth under the aegis of easing constraints on manned systems. Admiral Gilday contends that unmanned systems will be “affordable,” “lethal,” and “connected” if fleet experiments bear them out. Related claims advanced on their behalf: they will bring “capacity” to the fleet, meaning brute numbers of platforms, while reducing commanders’ reluctance to incur operational risk in combat. And unmanned systems will help the fleet adapt at “machine speed” to keep pace with mercurial surroundings.

Affordability and capacity go hand in hand. Uncrewed platforms presumably come cheap, meaning the services can afford them in bulk. If they have no crews, they don’t have to be designed with an eye toward human habitability, with berthing, dining facilities, and the like. That saves space, and cost. Unmanned craft are high-tech descendants of Corbett’s “flotilla” contingent, namely low-cost, high-impact platforms that—unlike capital ships such as carriers, cruisers, and destroyers—can be procured en masse. U.S. maritime strategy envisions prosecuting “distributed” operations centered on numerous light yet hard-hitting vessels and aircraft, manned and unmanned. In that sense capacity—and thus the ability to disperse units on the map for resiliency in the face of enemy action—is capability. Quantity has a quality all its own.

Lethality connotes unmanned systems’ ability to enhance the fleet’s fighting power, either by putting ordnance on target itself or by contributing in other ways. For the late Captain Wayne Hughes, the dean of fleet tacticians, the arbiters of high-tech naval combat are “scouting effectiveness,” meaning the proficient use of shipboard and offboard sensors, combat systems, and computer datalinks to find enemy units; “weapon range,” or the ability to inflict damage at a distance; and tactics, which are determined by scouting effectiveness and the range of a fleet’s weaponry. Unmanned systems are proven contributors in the realm of scouting and could add range and, more importantly, depth to the fleet’s missile inventory. Hughes’s three tactical factors supply a standard to judge how efforts to put the Unmanned Campaign Framework into practice are faring.

The directive also touts unmanned systems for muting perceptions of risk. In other words, commanders need not fret about putting human lives in jeopardy when they send uncrewed planes, ships, or subs into harm’s way. That makes it easier to give the order, and thus encourages enterprise and daring among fighting forces. Unmanned systems are “risk-worthy,” to borrow the clunky term favored by proponents. Plus, by definition, autonomous platforms have no fear of danger. Human operators might blanch in the face of the enemy; unmanned systems will carry on so long as their hardware and software function. Machine warriors are doughty warriors, able to navigate effortlessly among the gusty passions that make up the climate of war. Gauging how human commanders interact with and use forces made up of an increasing proportion of unmanned craft should be a focus for wargaming and exercises.

And lastly, and most fittingly for a 19FortyFive readership, unmanned backers maintain that these systems will help the force adapt to swift and recurring change. Colonel John Boyd urged tacticians and strategists to take control of the surroundings and impose “fast transients” on their foes. If unmanned systems live up to their hype, U.S. and allied forces will be able to withstand fast transients sprung by opponents while springing a few of their own. One hopes wargame and exercise designers will throw frequent curves at emerging systems to test the degree to which learning at machine speed fulfills Boyd’s vision.

It’s hard to tell whether these features add up to a genuinely game-changing capability for the U.S. sea services. Carrier aviation allowed the battle fleet to strike at antagonists, with precision, scores if not hundreds of miles away—a leap beyond past surface combatants’ ability to strike a few miles away with shipboard gunnery. Naval nuclear propulsion allowed submarines to stay underwater for long stretches of time and travel at high speed beneath the waves, bolstering not just at-sea endurance but stealth. No single attribute put forth in the Unmanned Campaign Plan matches up with these past advances. These are improvements around the margins. In aggregate, though, liberating platforms from people might bring forth a revolution.

James Holmes is J. C. Wylie Chair of Maritime Strategy at the Naval War College and a Contributing Editor for 19FortyFive. The views voiced here are his alone.