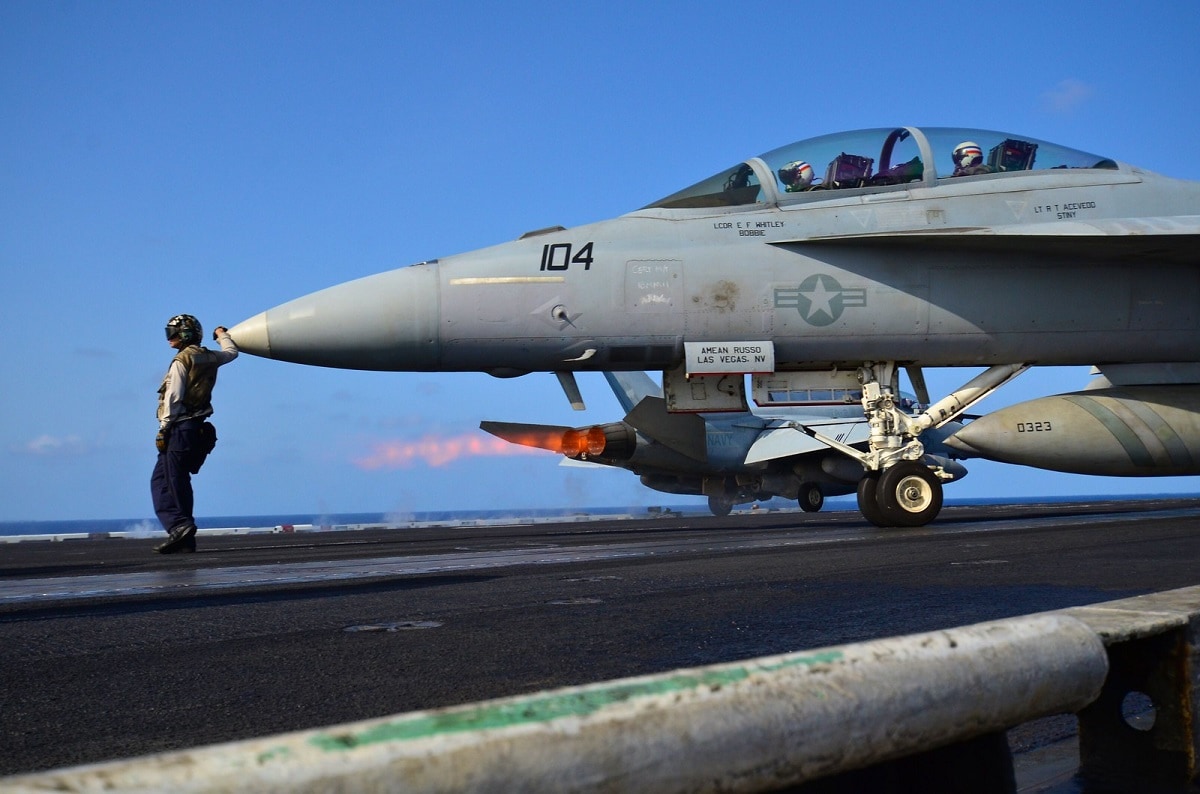 A former US Navy fighter pilot recently shared details and some of her thoughts on an unusual experience almost two decades ago, an encounter with an unidentified flying object (UFO) nicknamed the “Tic Tac.”

On Nov. 14, 2004, after again detecting one of the anomalies, the destroyer tasked two F/A-18 Super Hornets to take a look around the area where it had been detected. The fighters were flown by Dave Fravor, then a squadron commander, and Alex Dietrich, then a lieutenant junior grade.

Once they arrived in the area, the pilots got a visual on a mysterious object, which was reported to be “an elongated egg or a ‘Tic Tac’ shape” that was “solid white, smooth, with no edges,” and “uniformly colored with no nacelles, pylons, or wings,” according to a military report on the event obtained a few years ago by a CBS News affiliate.

During a recent “60 Minutes” interview, Fravor recalled seeing “this little white Tic Tac-looking object” moving above the water with, as Dietrich noted, “no predictable movement” and “no predictable trajectory.”

Not ‘part of our plan’ 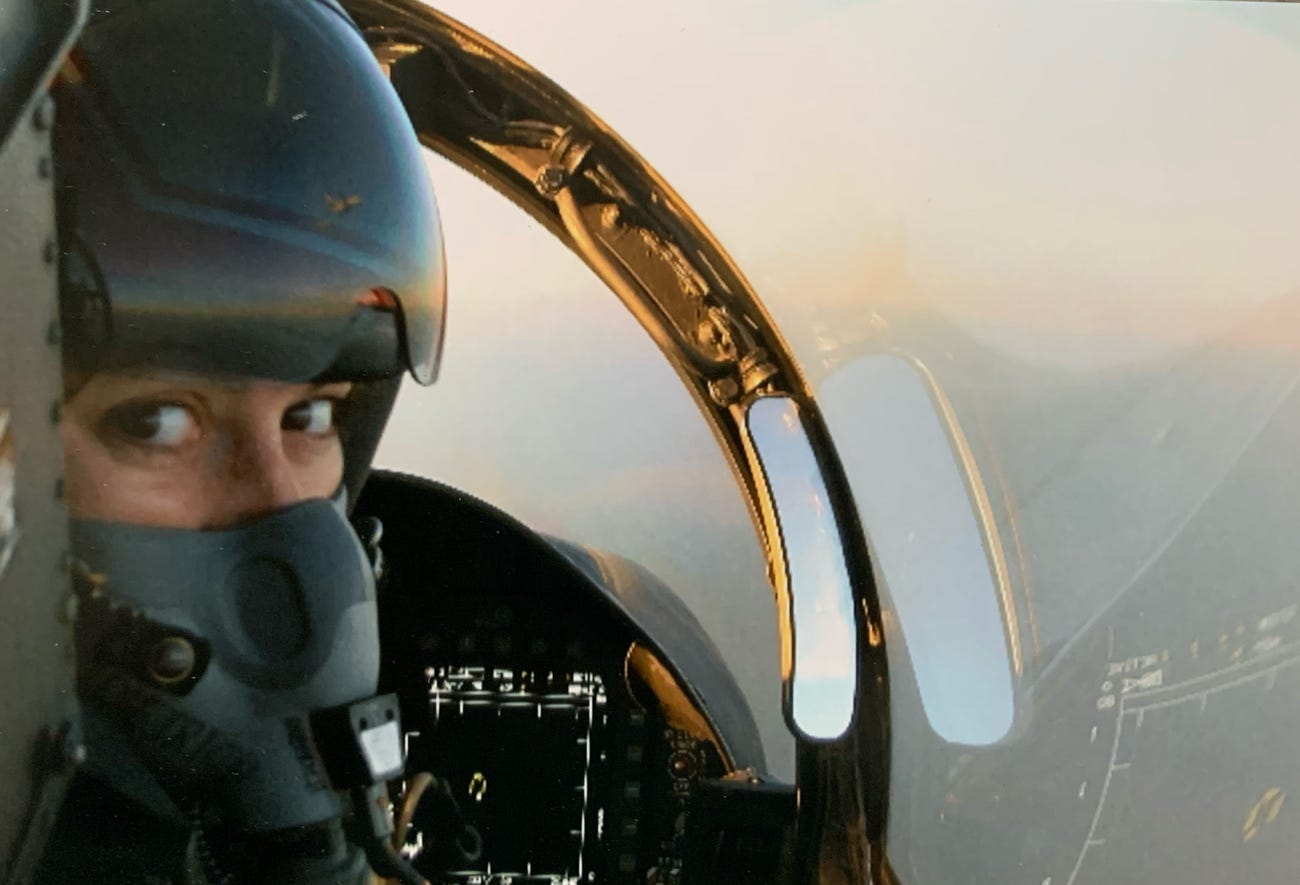 “This didn’t fit our script,” Dietrich, who retired as a lieutenant commander, told Insider, explaining that the carrier group and the accompanying air wing were training for a deployment to the Middle East, where they might be called upon to provide precision strikes, convoy oversight, and air support, among various other missions and tasks.

“A flying Tic Tac wasn’t part of our plan,” she said, recalling their encounter with the object.

In the recent “60 Minutes” interview, Dietrich described the experience as “unsettling.” Neither aircraft was armed at the time, and she said she “felt the vulnerability of not having anything to defend ourselves.”

Talking with Insider, the former naval aviator said that it was not entirely clear how she or her commander were expected to react and respond to the mystery object, which they were not expecting to encounter.

“We do air-to-air scenarios where we expect to encounter adversary aircraft, and we have set plans for how we approach them,” Dietrich explained. “But these assume that it is a generation of fighter we would be at least familiar enough with.”

She said that at that time, she “had not been briefed on any protocol for intercepting or merging with a UAP.”

During the encounter, Dietrich remained overhead as Fravor moved in to investigate. As the commander got closer to the unidentified object, which Fravor said was about the size of his plane, it suddenly accelerated and disappeared. A different Navy flight later caught the object on infrared video.

The US military officially declassified that video last year, along with a couple of others from different incidents, and noted in a statement that the phenomena seen in these videos are still “unidentified.” The following video is from the 2004 “Tic Tac” incident.

‘We don’t know what it was’

Dietrich recalled that she experienced a “roller coaster of emotions” during the 2004 incident, with feelings running from excited to nervous. She said that her primary concern was figuring out whether it was an adversary, some sort of threat, or a even just a flight safety issue. They didn’t figure that out, and it is still not clear what it was.

Over the years, there has been a lot of speculation about this incident and others, but Dietrich told Insider that she did not let her mind “run away with wild conclusions or fantasies about what it might be.”

“I gave my report, and I went on with my life and my career,” she said, acknowledging that she has not followed this matter closely in the years since.

Dietrich revealed that at the time of the incident she was a little “disappointed” by the lack of response.

“If I had been in charge of the carrier strike group and had heard this report, I probably would have redirected assets. We had all of these aircraft and sensors and radar to collect information in that moment,” she said, adding that she is not sure “why the decision was made not to pivot in that moment and redirect focus.”

Fravor and Dietrich told “60 Minutes” that while they were debriefed, they were not aware of any further investigation into what happened that day in 2004.

“We don’t know what it was, but it was there. We saw it, and it is worth investigating further,” Dietrich told Insider.

Dietrich’s personal interest in this issue has faded over time.

“It mattered to me on November 14, 2004,” she said. “It mattered very much because I was there face-to-face with it, and it could have been a threat … In the years and now decades since, it doesn’t matter as much to me.”

‘Not jumping to conclusions’ 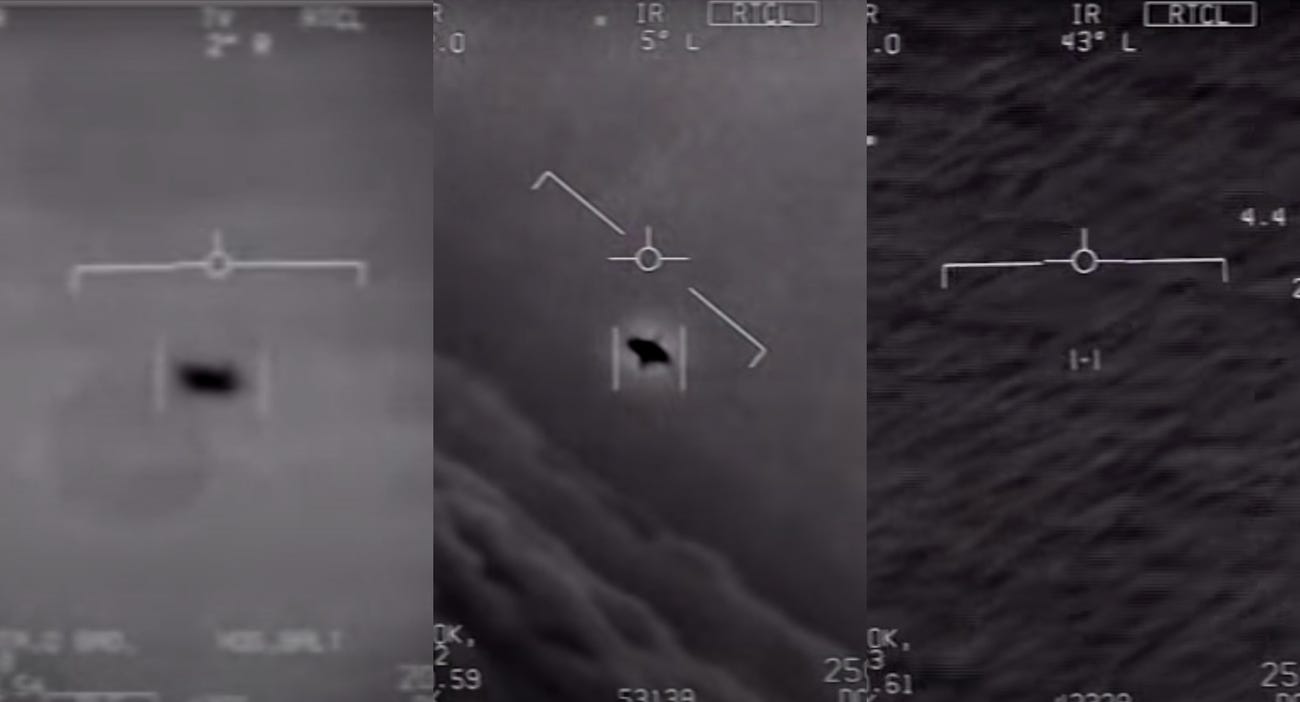 Left to right, still images from FLIR, GIMBAL, and GOFAST videos of unidentified aerial phenomena released by the Pentagon. US Department of Defense.

Dietrich told Insider that by answering questions about her experiences, she hopes that if and when these incidents occur, and there have been a few, the military will “take a training time out” and “spend some resources investigating” to determine whether or not what is being observed is a danger. She also said she hopes to reduce the stigma around reporting these incidents.

This is potentially more likely given the military’s newfound interest in these incidents.

The Pentagon created the Advanced Aviation Threat Identification Program in 2007, but the program ended in 2012 as the military directed its attention to “higher priority issues,” a Pentagon spokesperson told CNN in 2017 after The New York Times dragged the program out of the shadows.

But last year, just a few months after the Pentagon declassified several videos of unexplained incidents, the Department of Defense publicly established the Unidentified Aerial Phenomena Task Force “to detect, analyze and catalog UAPs that could potentially pose a threat to US national security.”

Dietrich’s story is unusual but not necessarily unique. There have been a number of unexplained UFO sightings by US service members. One former naval aviator, retired Lt. Ryan Graves, told “60 Minutes” recently that there was a time when they saw them “every day for at least a couple of years.”

The US Navy, explaining new policies for reporting encounters with unidentified aircraft, told Politico in 2019 that “there have been a number of reports of unauthorized and/or unidentified aircraft entering various military-controlled ranges and designated air space in recent years.”

These sightings have raised a lot of questions and provided few real answers, but next month, the US intelligence community is expected to present an unclassified report on these “unidentified aerial phenomena.” It is not clear whether this report will shed light on what pilots and others have been seeing.

As for what the unexplained incidents involving the military might mean, Dietrich, a veteran pilot who flew over 200 combat missions during her career in the Navy, did not speculate. She said she would “urge patience and not jumping to conclusions.”