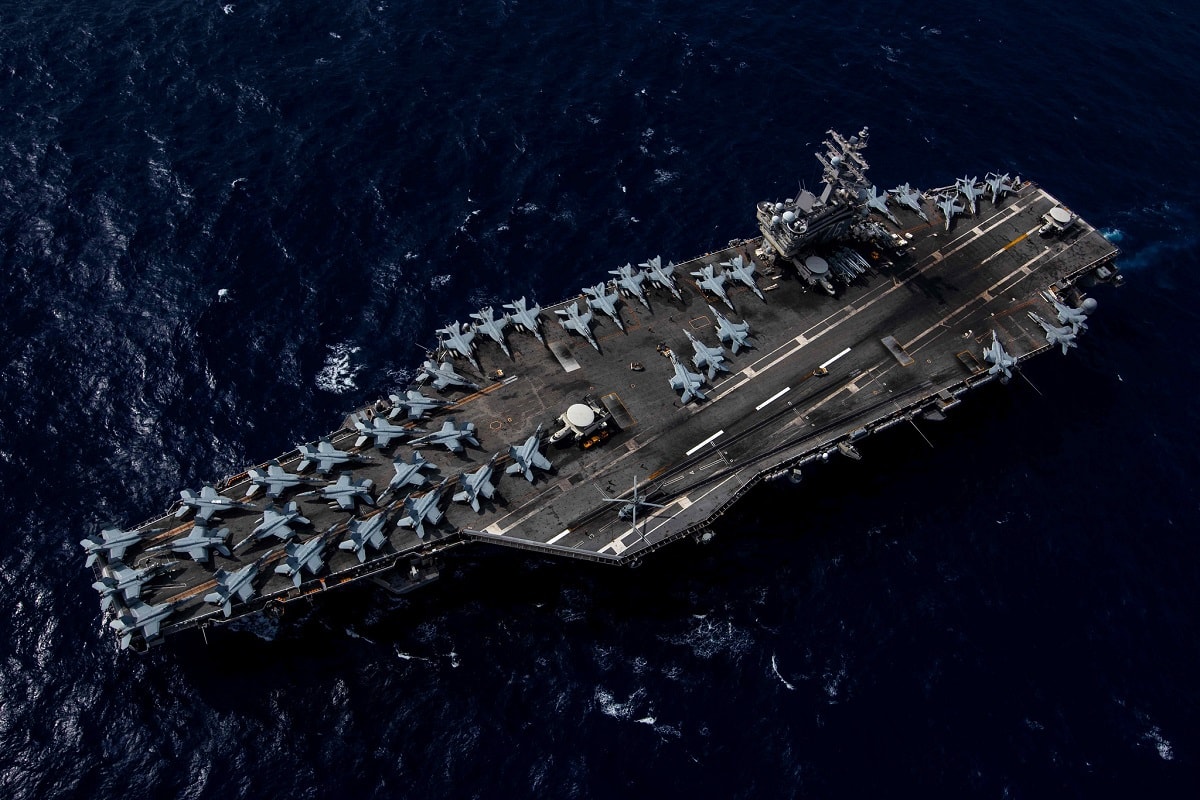 PHILIPPINE SEA - In this file photo, the Navy’s forward-deployed aircraft carrier USS Ronald Reagan (CVN 76) transits the Philippine Sea. Ronald Reagan, the flagship of Carrier Strike Group 5, provides a combat-ready force that protects and defends the collective maritime interests of its allies and partners in the Indo-Pacific region.

The Gipper will be going to the Middle East in a rare deployment to the U.S. Central Command to support the U.S. withdrawal of forces from Afghanistan this summer.

The United States Navy announced this week it would send USS Ronald Reagan (CVN-76) from its homeport in Yokosuka, Japan, towards Afghanistan in the coming weeks. The move would leave no U.S. carrier in the Asia-Pacific for at least part of that time.

The U.S. Seventh Fleet, which is based in Japan, will still have dozens of other ships and aircraft, but as FoxNews reported, the deployment of the only available carrier in the region represents a significant diversion away from Asia – even as President Joe Biden has called the region a priority for the U.S. military.

USS Ronald Reagan, along with Carrier Air Wing 5 (CVW-5) and her escorts, will replace the USS Dwight D. Eisenhower (CVN-69) strike group. CVN-69 has been deployed twice during the past thirty-six months and has been operating in the Arabian Sea since April, cannot safely extend its deployment.

The Department of Defense (DoD) has defended the decision to send CVN-76 to provide assistance and security during the U.S. withdrawal of Afghanistan, which is scheduled to be completed by September 11, 2021, announced by the Biden administration earlier this year.

“As you have seen over the past several weeks, when such deployments do occur, we talk about them when the time is appropriate and provide frequent updates,” the DoD said in a statement reported by USNI News. “DoD will continue to ensure that commanders have what they need to support a safe and deliberate withdrawal of forces from Afghanistan, but we will not get ahead of any future operational decisions, directives or movements.”

The deployment of Ronald Reagan to the Middle East will mark the first time since the Japan-based strike group and air wing operated in the region since the former USS Kitty Hawk (CV-63) was deployed to the Persian Gulf to cover the early stages of the invasion of Iraq in 2003.

Earlier this month, the forward-deployed CVN-76 began to conduct a routine at-sea patrol, during which she will support security and stability in the Indo-Pacific region. The aircraft carrier and its embarked CVW-5 are expected to work with allies and partners, promote adherence to a rules-based international order, as well as maintain presence and flexibility to meet the needs of the U.S. Department of Defense.

The U.S. Navy said the Ronald Reagan successfully completed sea trials in preparations for deployment on May 13.

“Ronald Reagan’s flexible presence is a key element in helping assure our regional allies and partners that the United States remains committed to ensuring freedom of the seas,” said Capt. Fred Goldhammer, commanding officer of Ronald Reagan. “Across the globe, the crew aboard Ronald Reagan seeks to preserve ‘peace through strength’ and is ready to answer the call.”

The Ronald Reagan Strike Group currently includes the Arleigh Burke-class guided-missile destroyer USS Halsey (DDG 97) and the Ticonderoga-class guided-missile cruiser USS Shiloh (CG 67). It is expected that both of those ships will also head to the Middle East in the coming weeks.