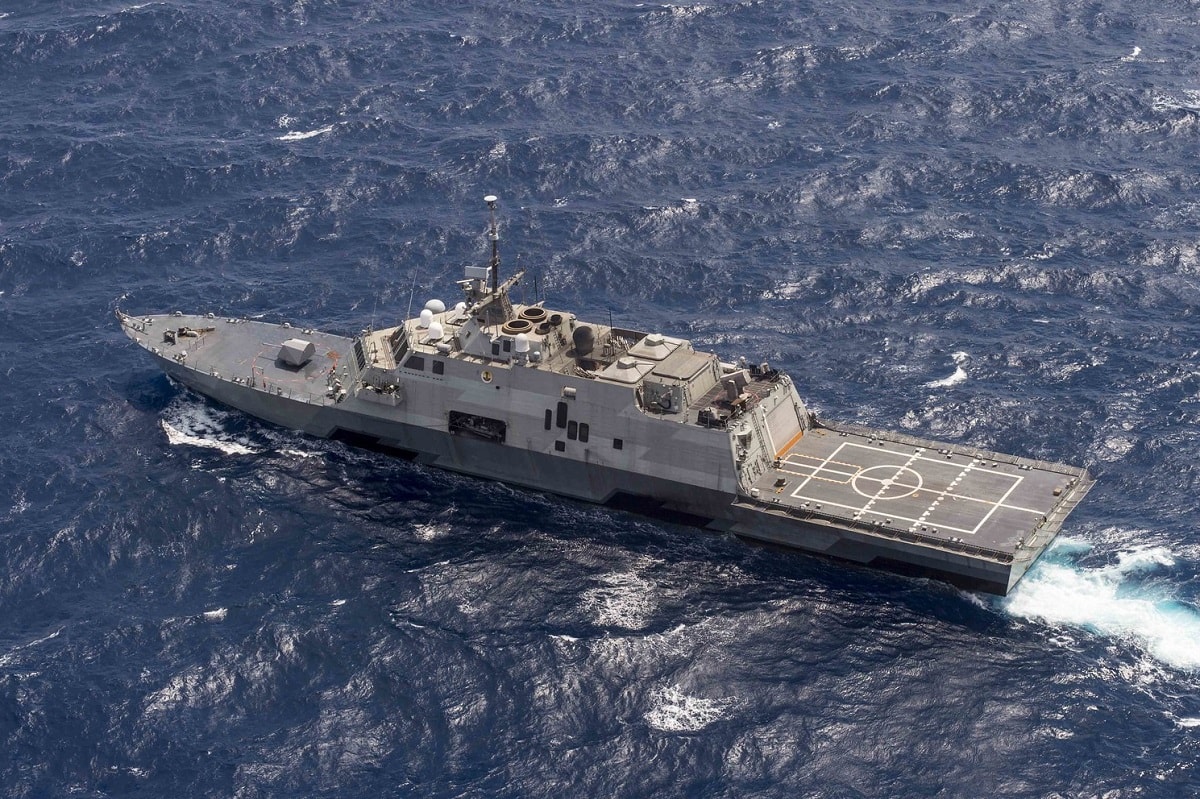 Critics of the United States Navy’s Littoral Combat Ships (LCS) have argued it is a platform seeking a problem rather than addressing one, and that is why less than fifteen years after entering service the first two of the warships will be retired later this year.

USS Independence (LCS-2) will be decommissioned on July 31, Navy spokeswoman Cmdr. Nicole Schwegman confirmed to USNI News; while USS Freedom (LCS-1) will leave the active fleet on Sept. 30, according to a decommissioning memo also reviewed by USNI News. Both vessels will then join the reserve fleet.

When the first of the LCS vessels entered service the U.S. military was very much engaged in the Global War on Terror (GWOT), and the ships seemed ideally suited to the task. They could operate close to shore against missile-firing boats and small submarines. Fast and agile, it was envisioned that they could be a stealthy surface combatant capable of defeating those anti-access and asymmetric threats in littoral or near-shore waters.

The U.S. Navy opted for two unique classes, and each was slightly smaller than the U.S. Navy’s Oliver Hazard Perry-class frigate. The Freedom-class, designed by Lockheed Martina and built by Marinette Marine in Marinette, Wisconsin, was the smaller of the two – a steel-hulled 387-foot warship that featured a semi-planing mono-hull. The Independence-class design featured a trimaran with a slender stabilized mono-hull. The 421-foot all-aluminum warship was designed and built by Austral USA in Mobile, Alabama.

All of that sounded good, but in practice, the ships have been prone to breakdowns and defects. Congress also cut funding from the mission modules and this left the U.S. Navy with small and fast ships that really aren’t up to the task in the changing geopolitical world. According to some accounts the LCS came to be known as the “Little Crappy Ships” by some U.S. Navy sailors.

As The San Diego Union-Tribune reported this week the LCSs simply don’t fit the long-term Navy fleet, which will still consist of aircraft carriers, destroyers, and other surface combatants that have been around for decades. A new class of frigates, as well as unmanned ships and aircraft, could do the jobs the Navy envisioned for the LCS and do it more cost-effectively.

It remains unclear what will happen to the nearly dozen LCSs that are now currently under construction.

The Navy had proposed retiring the first four LCSs early in its Fiscal Year 2021 (FY21) budget submission. Chief of Naval Operations Adm. Mike Gilday justified the plans by saying it would cost about $2.5 billion to update those warships to the configurations of ships in the class that have been since build, and that the funding could be best spent elsewhere.

It has been noted too that the first four LCSs were “test ships,” and are configured differently from the new vessels of their classes. However, Congress has nixed plans to decommission the third and fourth vessels – respectively the USS Fort Worth (LCS-3) and USS Coronado (LCS-4)

However, the platform still has some supporters. USS Freedom was recently deployed in anti-drug operations, and a joint U.S. Coast Guard and U.S. Navy team seized more than 1,500 kilograms of cocaine while operating in the U.S. Third Fleet waters in April. Freedom and embarked Helicopter Sea Combat Squadron 23 detachment identified and approached the illicit drug transport boat and assisted the Coast Guard, which conducted a boarding, search, and seizure of the vessel.

The recent drug seizure highlighted that the platform could still serve a purpose, but it is likely too costly a platform that other vessels could undertake instead.

The Government Accountability Office reported the Navy still plans to spend an additional $61 billion to maintain and operate the warships.

“With limited operations to date, these ships have entered the Navy’s maintenance cycle,” the GAO report noted. “Since 2005, GAO has reported extensively on LCS issues, including ships delivered late and with increased costs and less capability than planned. The Navy also encountered problems as LCS entered the fleet, including higher than expected costs for contractor maintenance and numerous mechanical failures. In 2020, GAO reported that major maintenance on other surface ships using the same contracting approach as LCS was 64 days late, on average. The Navy acknowledges the importance of reducing maintenance delays in order to improve the readiness of its surface fleet.”

Given the costs and still a lack of defined mission, it seems the Navy may cut their losses with the Littoral Combat Ship and start over.