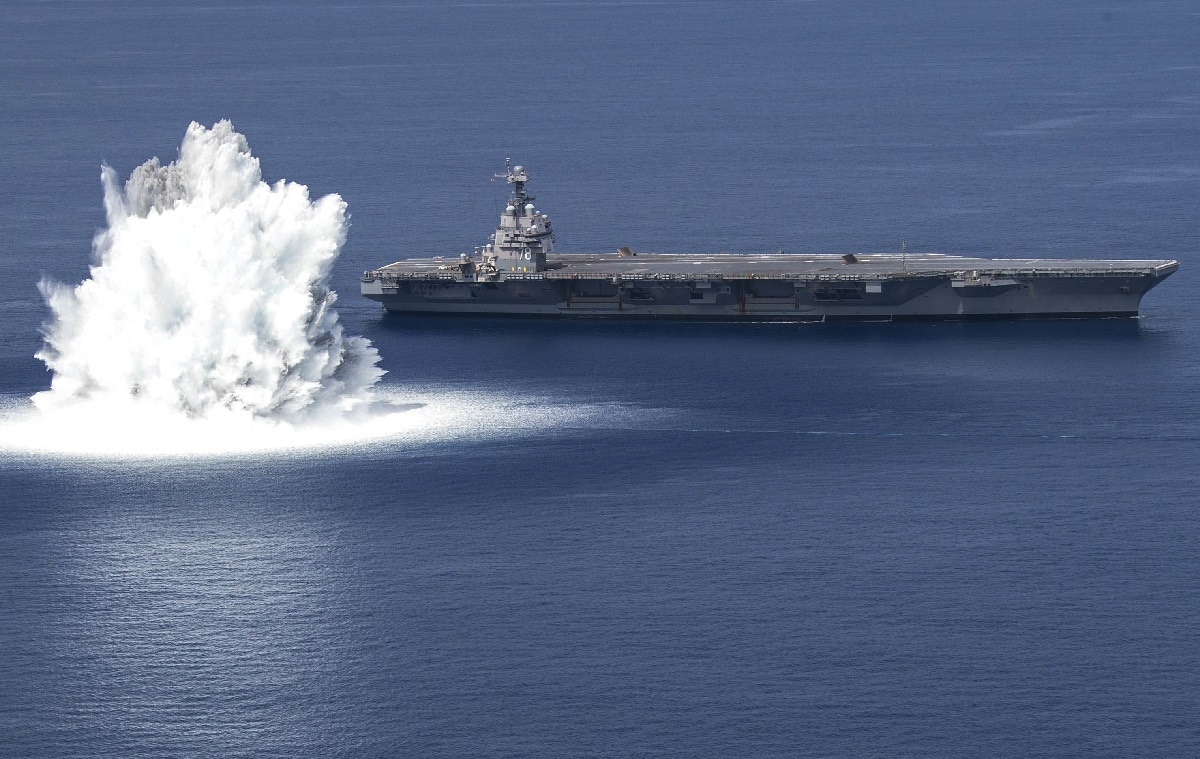 Can a modern nuclear-powered aircraft carrier survive a massive explosion that registers as a 3.9 magnitude earthquake?

There is one way to find out, and that is detonating just less than 20 tonnes of explosives within meters of the nearly $13 billion warship.

It might sound crazy, but the U.S. Navy just conducted such a Full Ship Shock Trial (FSST) – used to verify whether a warship is capable of taking a hit and still continuing on its mission in a real event – of its newest carrier USS Gerald R. Ford (CVN 78).

The ship passed with flying colors, but that was expected, according to the U.S. Navy, which noted that the first-in-class aircraft carrier was designed by utilizing advanced computer modeling methods, testing, and analysis to ensure the ship is hardened to withstand battle conditions. The shock trials provide data used in validating the shock hardness of the warship.

The origin of an FSST dates back to the Second World War, and the U.S. Navy has conducted tests over several decades, most recently for the Littoral Combat Ships USS Jackson (LCS 6) and USS Milwaukee (LCS 5) in 2016; as well as for the San Antonio-class amphibious transport dock USS Mesa Verde (LPD 19) in 2008, the amphibious assault ship USS Wasp (LHD 1) in 1990, and the guided missile cruiser USS Mobile Bay (CG 53) in 1987. According to the Navy, the last aircraft carrier to execute FSST was USS Theodore Roosevelt (CVN 71) in 1987.

The Navy is conducting the shock trial testing in accordance with Office of the Chief of Naval Operations Instruction 9072.2, and as mandated by the National Defense Authorization Act of 2016. The shock trials are taking place off the East Coast of the United States – about 161 kilometers off the Florida coast – according to the Navy, “within a narrow schedule that complies with environmental mitigation requirements, respecting known migration patterns of marine life in the test area. The Navy also has employed extensive protocols throughout FSST to ensure the safety of military and civilian personnel participating in the testing evolution.”

In a statement, the Navy also said that it “conducts shock trials of new ship designs using live explosives to confirm that our warships can continue to meet demanding mission requirements under harsh conditions they might encounter in battle.”

After successful completion of FSST – and it is expected it will be successful and not accidentally sink the supercarrier – later this summer, USS Gerald F Ford will enter a Planned Incremental Availability for six months of modernization, maintenance and yes “repairs” prior to its operational employment.

The carrier successfully completed its 18-month Post Delivery Test & Trials period in April, during which the crew completed all required testing, accomplished planned improvements and maintenance ahead of schedule. It hasn’t been entirely smooth sailing as the issues with ordnance elevators and clogging toilets had to be resolved.