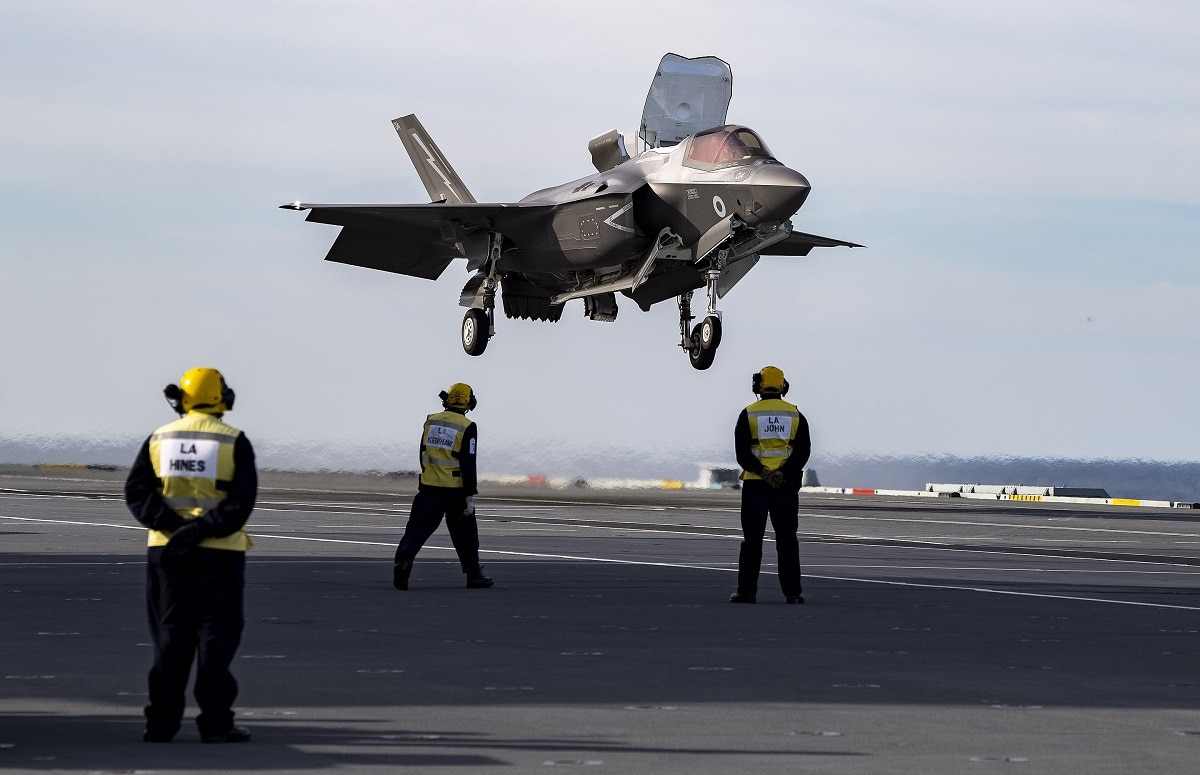 A British Lockheed Martin F-35B Lightning (s/n ZM148) of No. 617 Squadron RAF lands aboard the Royal Navy aircraft carrier HMS Queen Elizabeth (R08) in the Atlantic Ocean on 17 October 2019. HMS Queen Elizbeth was deployed in support of exercise "WESTLANT 19", which involved mission planning, arming the aircraft using the ship's Highly Automated Weapon Handling System, flying missions and debriefing on completion. The first operational deployment for HMS Queen Elizabeth with No. 617 Squadron RAF and a squadron of U.S. Marine Corps Lightnings is planned for 2021.

In 2018, as part of its Navy Vision 2045 plan, the Republic of Korea (South Korea) began to develop a light aircraft carrier that could carry a fleet of F-35B Lightning II aircraft – the short take-off vertical landing (STVOL) variant of Lockheed Martin’s Joint Strike Fighter. The exact role that the future carrier might plan in a potential conflict has been debated, especially as the biggest threat to South Korea remains its neighbor, North Korea.

A major concern has been how vulnerable the carrier might be in such a conflict with its northern neighbor, which has a sizeable submarine force but lacks a surface force. However, that consideration could impact the design of the eventual carrier.

Earlier this year, Seoul had tentatively earmarked about $2 billion for a domestically-build 30,000-ton aircraft carrier, which could enter service by 2033. Yet, even as the South Korean government looks ready to move forward with a carrier, the actual design is only beginning to take shape. That is because there are actually two competing designs for the South Korean Navy’s future light aircraft carrier, code-named CVX.

According to a report from DefenseNews, the two leading South Korean shipbuilders – Hyundai Heavy Industries (HHI) and Daewoo Shipbuilding and Marine Engineering (DSME) – recently displayed their conceptual designs, which were presented at the International Maritime Defense Industry Exhibition (MADEX), a four-day, biennial naval defense show that began June 9 in the southern port city of Busan.

The two designs are significantly different from one another, but also from HHI’s initial CVZ design that featured a modular, ski jump-styled takeoff ramp.

The new light carrier design unveiled by HHI is far more than a modification of its original concept. It is a true light carrier that could make good use of every bit of the space onboard – and run with a reduced crew. The design for this new warship has a displacement of just 30,000 tons, yet would still be 60 meters wide and 270 meters long with a 260-meter flight deck. That is actually thirty percent longer than the flight deck on the original HHI design, and in this case, it would be modular – featuring an option ski-jump ramp as required based on the complement of aircraft onboard.

“We can keep the displacement low because we redesigned the lower part of the ship. Our previous version has a thicker hull,” an HHI representative told Naval News, which also reported that the warship could carry between sixteen and twenty F-35B fighters as well as helicopters. “We’re still able to easily alter the flight complement to carry out amphibious assault operations. We can fit more than thirty helicopters if we need to.” 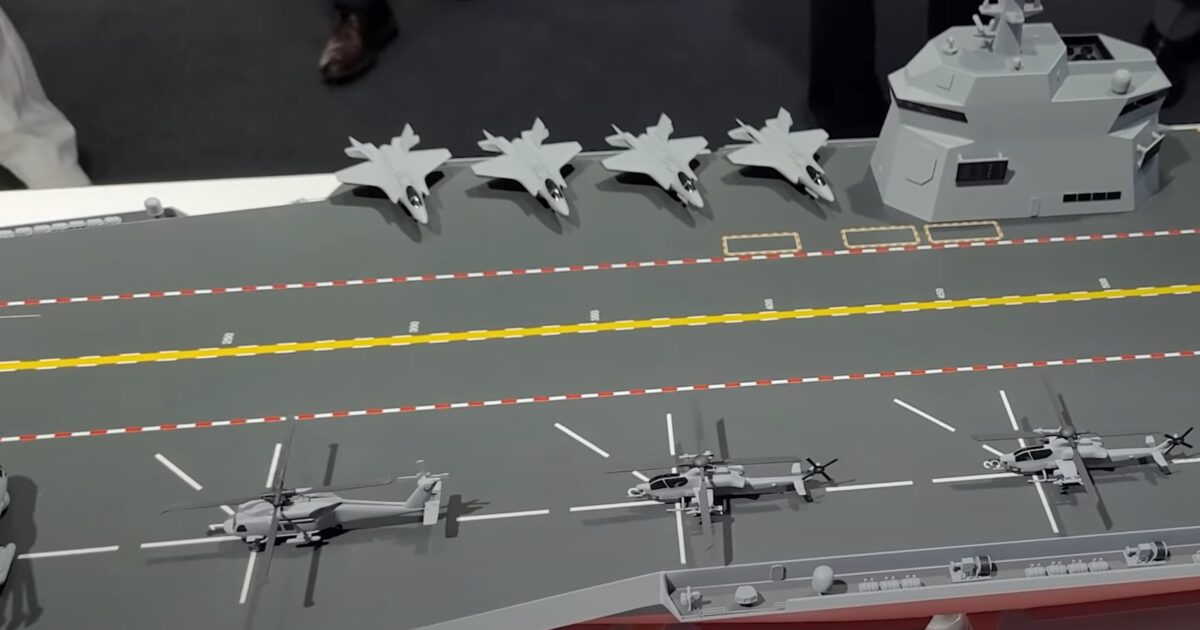 The HHI light carrier would feature a pair of aircraft elevators on either side of the flight deck, along with twin islands with the first handling overall operations, while the second island would carry out flight control duties.

The “X-shaped” configuration of the new islands could also provide unique advantages including a significant degree of stealth by reducing the ship’s overall radar cross-section, the HHI representative suggested. The unique design also allowed for the installation of the ship’s AESA radar lower down on the island.

The vessel also featured a greater focus on unmanned systems, which could require fewer sailors, and help make better use of the space on board.

The design from DSME was larger, and at 45,000 tons with loaded displacement would require a crew complement of 1,400 sailors. The proposed warship would be 263 meters long and 46.6 meters wide, and it could carry up to sixteen STVOL fighter jets on the flight deck along with an additional twelve in the hanger – making it a true floating airfield to deal with threats from North Korea or even China. To help speed the launch of aircraft, the carrier design featured a pair of elevators. 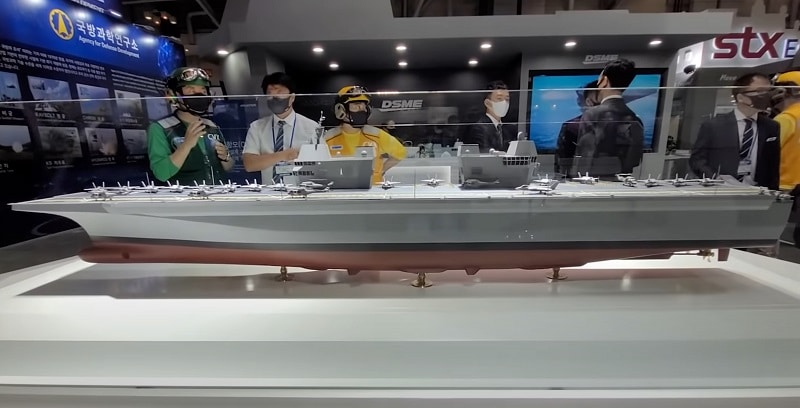 The carrier would feature a flat flight deck with no ski-jump, while it also included two islands with a bridge located forward and the “flyco” for flight operations located aft. According to DSME, either island could work as a back-up for all operations in the case of an emergency such as one being taken out of service in combat.

At this point, it is unclear if one carrier has a significant advantage over the other, but the South Korean Defense Ministry is still conducting its feasibility study on the project while waiting for final approval by the National Assembly. Even as it seems all but certain that South Korea will build a carrier, the question now is which design might win out.