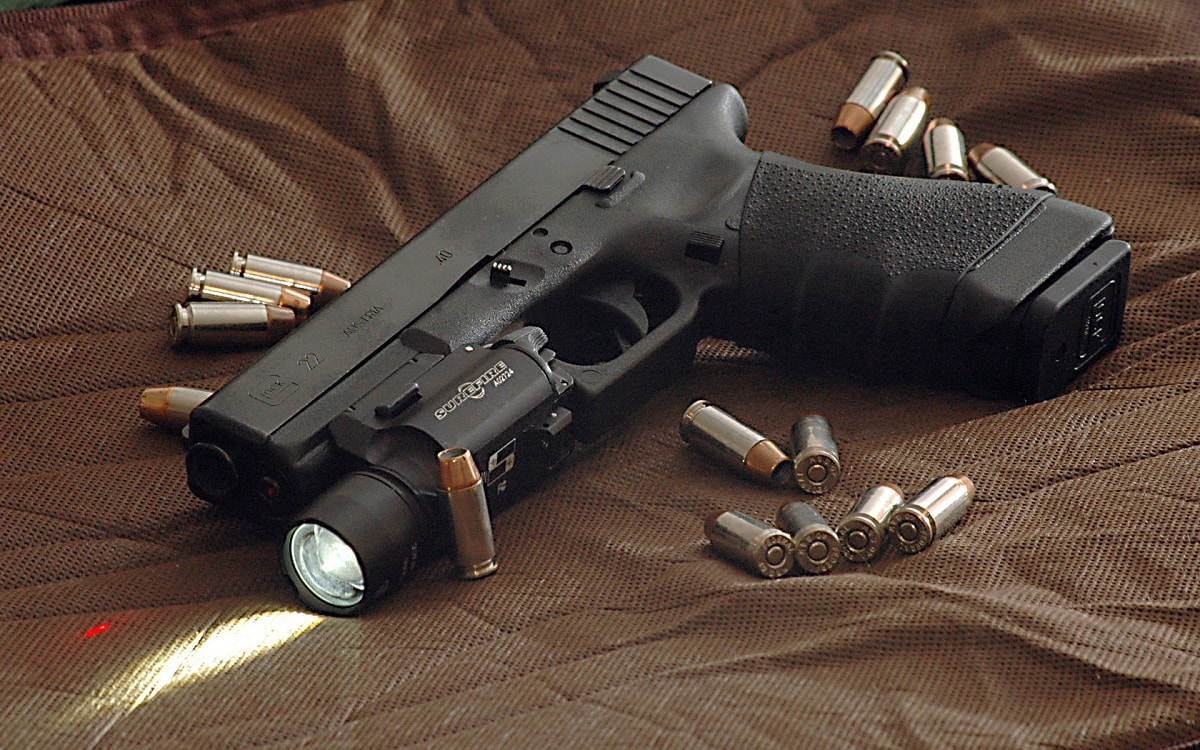 This is a Glock 22 (.40 S&W) with a few modifications. It has a Hogue rubber grip, Lasermax internal laser, extended slide takedown lever, Surefire X200a light, and Trijicon night sights. It is surrounded by .40 Hydra-shok bullets.

Baseball legend Yogi Berra reportedly once proclaimed, “It’s like déjà vu all over again,” and while a bit of a redundancy, many shooters may be feeling such a sensation when heading to buy ammunition. The great ammunition shortage of 2021, along with high prices if you do find any, won’t likely end anytime soon–and it is unlikely to be contained to a single year.

In fact, it was just a few years ago during the Obama administration that ammunition of all calibers was in great demand, which in turn drove up prices to record levels. The shortage, which even impacted law enforcement, began just after Obama was elected. According to one gun shop owner, it even began the day after the 2008 election when “people started stocking up, buying half a lifetime to a lifetime supply of ammo all at one time.”

Whereas the novel coronavirus kicked off a buying spree that saw record firearms sales last year, and into the first four months of 2021, which in turn created nearly unprecedented demand for ammunition – in 2009, the increased sales of firearms was also a factor, but so too were the wars in Iraq and Afghanistan.

There were also a number of unsubstantiated rumors that the government was stocking up on ammunition, which in turn and quite expectedly resulted in panic buying.

The result was an ammunition shortage that actually lasted for years. According to a 2014 report from Vox.com, the surge in ammunition took years to address in part because manufacturers didn’t believe the panic would last long enough to invest in costly new factories. This time around, the ammo makers have built new facilities and run production lines around the clock.

However, many of the lines had been shuttered for weeks or longer due to the national shutdown that was brought on by the pandemic, so even with new factories, it could take months to make up the lost ground especially as the sales of guns broke all the records. The increase in first-time shooters also meant that those individuals were unlikely to have any stockpiles and thus boosted the demand.

Another consideration both during the “Obama Ammo Shortage” and the “Covid/Biden Ammo Shortage” is that the supply of boxes of bullets never really was that great to begin with. Many gun shops and smaller retailers rarely stock mass quantities of ammunition.

First and foremost, the margin is simply too low. Ammunition isn’t a loss leader, but it is still a product that is offered to bring people into the store so they might buy something else. Because of the low margins, it makes little sense to stock more than what regularly sells. Demand is also cyclical – shooters will buy more in the summer to go to the range and in advance of the fall hunting season, but as winter rolls around there tends to be a dip.

That cycle was broken last year as gun sales spiked after Joe Biden won the presidential election in November, further impacting the supply chain for retailers. Now with summer in full bloom and hunting season not all that many weeks away, ammo remains sought after even as gun sales have started to dip.

The result could be a return to normalcy in early 2022 – but it is just as likely that the demand will remain as Biden pushes for gun control, and his nominee to the ATF has called for an increased tax on ammunition. Empty shelves could be part of the new normal–at least for a while longer.