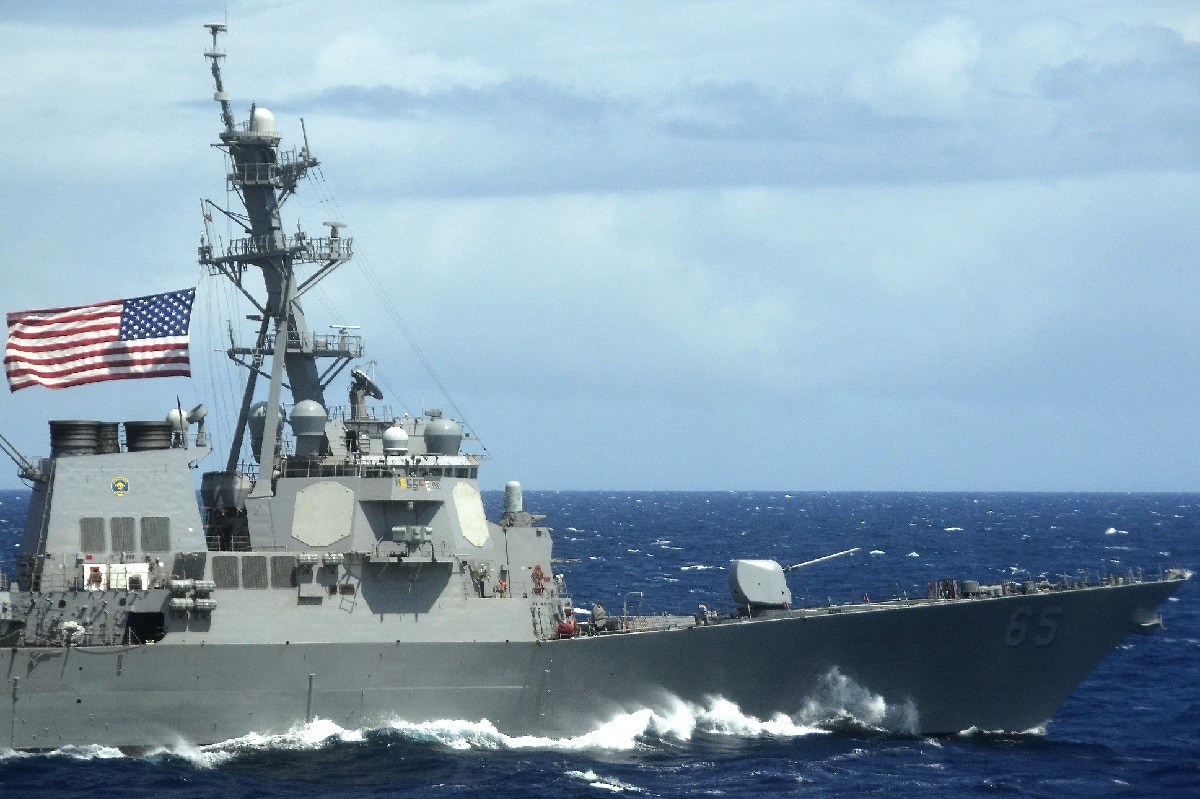 Beijing has been rattling sabers again this week, and Chinese officials said that the United States could face “dire consequences” after a U.S. Navy warship sailed near the disputed islands in the South China Sea that China maintains are its own.

But from here it gets a little more punchy. The Chinese have also claimed that it “chased away” the USS Benfold (DDG-65), an Arleigh Burke-class destroyer and one of the first warships to be fitted with the Aegis Ballistic Missile Defense System, on Monday – the fifth anniversary of an international tribunal’s rejection of most of Beijing’s claims over the resource-rich waters of the region.

“The US military’s actions seriously violated China’s sovereignty and security, seriously damaged the peace and stability of the South China Sea and seriously violated international law and the norms of international relations – more ironclad proof it is engaging in navigational hegemony to cause the militarization of the South China Sea,” said Tian Junli, spokesman for the Southern Theatre Command of the People’s Liberation Army (PLA).

“We strongly condemn and resolutely oppose this, and we urge the US side to immediately stop their provocative actions and to strictly control their maritime and air activities,” Tian Junli added. “Otherwise, the US side will need to bear all consequences that arise from this.”

The U.S. Navy has denied Beijing’s claims that USS Benfold was chased out of the South China Sea, and said that the guided-missile destroyer performed a freedom of navigation operation (FONOP) in neutral yet disputed waters.

“The PRC’s statement about this mission is false,” the United States 7th Fleet said in a statement released on Monday. “USS Benfold conducted this FONOP in accordance with international law and then continued on to conduct normal operations in international waters. The operation reflects our commitment to uphold freedom of navigation and lawful uses of the sea as a principle. The United States will continue to fly, sail, and operate wherever international law allows, as USS Benfold did here. Nothing PRC says otherwise will deter us.”

The U.S. 7th Fleet also said that the People’s Liberation Army Navy (PLAN) statement is also the latest in a long string of PRC actions that were meant to “misrepresent lawful” U.S. maritime operations.

In addition to Beijing’s claim to the resource-rich waters, Vietnam, Taiwan, and the Philippines have also asserted their respective claims over the archipelago. The governments of Vietnam and the Philippines had brought an international challenge to China’s claims over the waters to The Hague, where a tribunal ruled against Beijing on July 12, 2016 – five years to the date of the alleged incursion by the U.S. Navy destroyer.

The area risks being a flashpoint, as the United States maintains a mutual defense treaty with the Philippines, potentially raising the stakes should there be a clash between the Chinese and Filipino forces in the South China Sea.

However, that fact isn’t likely to make Beijing back down anytime soon.

“China will continue to firmly defend its sovereignty, rights, interests, and security in accordance with law, firmly protect the friendly, cooperative relations with regional countries, and firmly safeguard peace and stability in the South China Sea,” said Zhao Lijian, the spokesman for China’s foreign ministry, according to a transcript of the press conference, according to a report from USNI News.

Beijing had previously claimed that its military had also “chased away” another U.S. Navy destroyer USS Curtis Wilbur (DDG-54). The U.S. Navy has denied the claim, and previously said the warship had also performed a FONOP near the disputed Paracel Islands.

“U.S. forces operate in the South China Sea on a daily basis, as they have for more than a century,” the 7th Fleet added. “They routinely operate in close coordination with like-minded allies and partners who share our commitment to uphold a free and open international order that promotes security and prosperity. All of our operations are designed to be conducted in accordance with international law and demonstrate that the United States will fly, sail, and operate wherever international law allows – regardless of the location of excessive maritime claims and regardless of current events.”