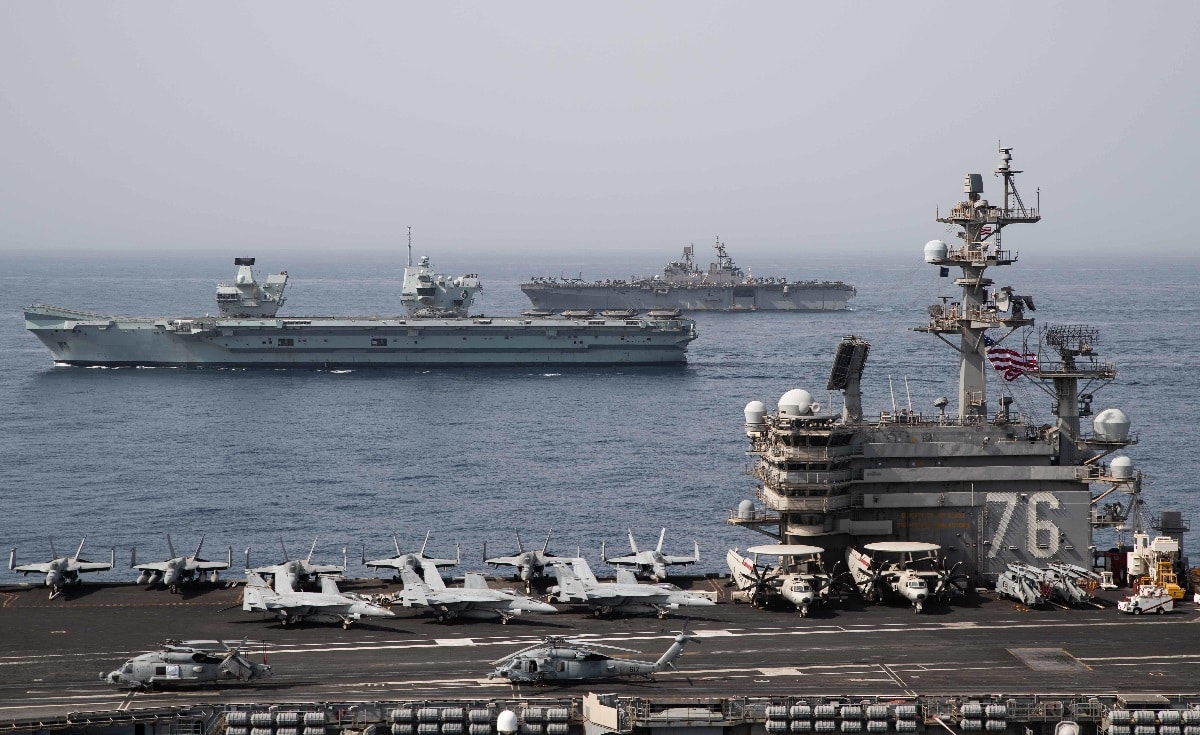 The late President Ronald Reason and First Lady Nancy Reagan first met Great Britain’s Queen Elizabeth at Windsor Castle in June 1982, and the pair developed a close relationship after bonding over their mutual love of horses. The Queen later granted Reagan an honorary knighthood in 1989.

This week, the two aircraft carriers named in honor of the heads of state met up in the Gulf of Aden. HMS Queen Elizabeth had completed a transit of the Suez Canal as part of her maiden voyage that will take the flagship of the Royal Navy to more than forty countries over the next several months.

USS Ronald Reagan (CVN-76), along with Carrier Air Wing 5 (CVW-5) and her escorts, departed the homeport of Yokosuka, Japan last month. The carrier is on a rare deployment to the Middle East, supporting the U.S. military’s withdrawal from Afghanistan. It marks the first time a Japan-based strike group and air wing operated in the region since the former USS Kitty Hawk (CV-63) was deployed to the Persian Gulf to cover the early stages of the invasion of Iraq in 2003.

The two carrier strike groups were joined by the Iwo Jima amphibious ready group (ARG), which consists of the Wasp-class amphibious assault ship USS Iwo Jima (LHD-7) with the 24th Marine Expeditionary Unit (MEU) embarked. All three of the flotillas took part in a large-scale joint interoperability exercise in the Gulf of Aden on Monday.

According to the U.S. Navy, the combined, bilateral surface, air, and sub-surface exercise was designed to enhance UK, Dutch, and U.S. maritime interoperability and demonstrate naval integration through a series of training scenarios.

“Our team was proud to operate alongside the UK Carrier Strike Group during this unique opportunity to hone the full scope of our mutual capabilities,” said Rear Adm. Will Pennington, commander of the Ronald Reagan Carrier Strike Group and Task Force 50, in a press release on Tuesday. “By operating together at sea, we deepen our coalition partnerships and extend our global reach throughout the region’s critical waterways.”

Monday’s exercise was the second time this year that the Iwo Jima ARG operated alongside the UK carrier strike group, following an exercise off the coast of Scotland in May.

“The aircraft carrier is the ultimate expression of global maritime power,” said Commodore Steve Moorhouse, commander, United Kingdom Carrier Strike Group. “Queen Elizabeth, Ronald Reagan, and Iwo Jima symbolize the might of the U.S. and UK partnership, and the ease with which our naval and air forces can combine here in the Gulf of Aden, or anywhere else in the world.”