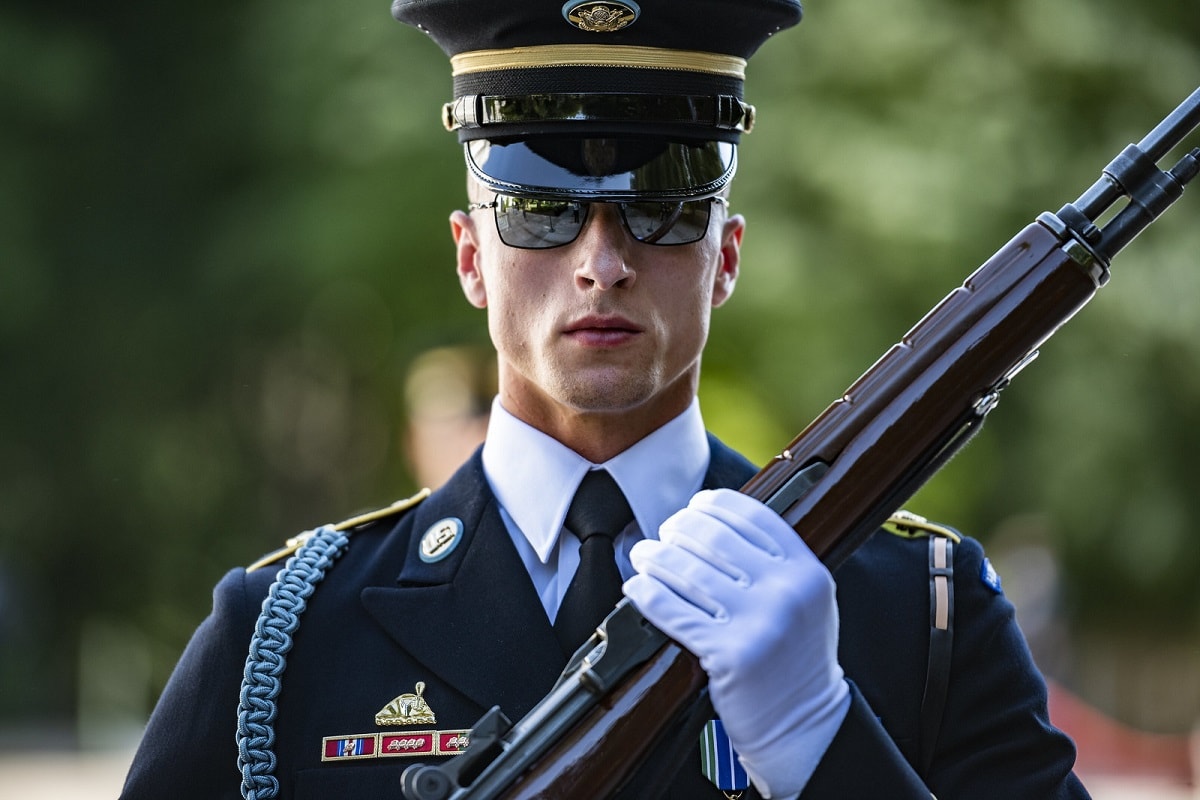 A sentinel from the 3d U.S. Infantry Regiment (The Old Guard) participates in the changing of the guard at the Tomb of the Unknown Soldier at Arlington National Cemetery, Arlington, Virginia, May 20, 2021.

Recently, the Biden Administration launched an initiative to insulate service members from extremist movements. Steps include re-visiting the definition of extremism and updating screening procedures. Opponents have denounced the initiative, arguing it will categorize mainstream positions as extremism. More broadly, the episode has reintroduced the debate over the health of civil-military relations in America. As with all matters since Trump’s ascent to the presidency, the health of the relationship became yet another arena for rigorous debate.

Yes, but all civil-military relations, especially those in the United States are inevitably complex. (Two scholars have provided helpful metaphors to describe the delicate balance — “newlyweds” adapting to marriage and “dialogue of the deaf.”)

The nadir occurred during the Vietnam War. The combination of White House micromanagement and Pentagon silence diminished the trust between civilians and the military. The deterioration then cascaded into public dissatisfaction with both.

Nevertheless, after converting to an all-volunteer force and its refurbishment during the Reagan Administration, the military revived its public standing while civilian institutions continued to underwhelm.

After the smashing victory in the Persian Gulf War, the reputation of the military rose to new heights, further tilting the relationship in its favor.

In 1992, Bill Clinton lacked credibility on national security affairs — and the military in particular — because he had dodged the draft during the Vietnam War. Clinton was nevertheless rescued by an endorsement from Adm. William Crowe, a former Chairman of the Joint Chiefs of Staff. After Clinton won, he (justifiably) named Crowe to a prestigious intelligence advisory board. Clinton, however, then later named Crowe to be Ambassador to Britain, which made the endorsement appear more “transactional.”

The endorsement set in motion the escalating pursuit of military endorsements every four years.

More fatefully, the Clinton Administration inaugurated a period in which the civilian leadership increasingly deferred to military officers — either in the chain of command or as appointees in an administration — despite the damage to its authority.

Yet deference persisted over successive administrations — why?

The reasons were straightforward — to increase approval, to accommodate the military, or, lamentably, to avoid responsibility.

Yet, while such deference was imprudent, it was still the civilian’s writ; the military officer’s obligation to provide alternatives remained.

Overall, the trend introduced a corollary — if the universal standard is “to coup or not to coup,” then the next level test should be whether a war is perpetuated in contravention of civilian direction.

Based on this test, relations have been dysfunctional – “toxic” — for more than a decade with the military leadership more often than not forgetting for whom they work.

In 2009, President Obama’s reluctant decision to surge 30,000 additional troops to Afghanistan required overcoming intransigence on the part of his military advisors.

According to Bob Woodward’s account, the president became incensed: “So what’s my option? You have given me one option.” Mullen’s responded they had presented a range of options; Obama countered these options were just minor variations on the 40,000.

At one meeting, a staff colonel had the temerity to warn the president that he must yield or face the prospect of mass resignation.

Such an event would have been a crisis of monumental proportions and, worse, it would have granted the military a praetorian veto over civilian matters.

Eleven years later, President Trump made a last-minute post-election bid to withdraw troops from Afghanistan. Upon receipt of the directive, Secretary of Defense Miller and National Security Advisor O’Brien moved immediately to stop the president.

O’Brien convinced Trump to convene a meeting of his national security council two days later, where the two, joined by Chairman Milley, warned of dire consequences if American forces left. They predicted another catastrophic departure like the chaotic escape from the Saigon embassy — a visual sure to rattle the media-sensitive president.

According to Axios reporting, top Administration officials were so frustrated with Milley that they resorted to reviewing classified intercepts of third-party conversations, which confirmed that Milley and other flag officers were determined to thwart the president’s agenda.

Trump yielded and the Afghanistan War continued into its fourth presidency.

Astonishingly, over the course of twelve years and two diametrically opposed Administrations, military officers had succeeded in prolonging a war despite the president’s — and the public’s — wishes.

The latter’s frustration cannot be understated.

Ostensibly the indispensable third pillar of the civilian-military relationship, the nation’s citizenry had instead been relegated to bystander. Its trump card — the power to choose and hold accountable the civilian leadership — had been subverted.

As far back as 2008, the public began supporting candidates who pledged to end the wars in Afghanistan and Iraq, only to watch their elected officials wilt in the gleam of military brass.

More dramatically, voters then turned to a maverick who had served neither in federal government nor the military but loudly promised to end “forever wars.”

Upon taking office, he channeled the public’s frustration in a now-infamous July 2017 meeting with his national security team.

His advisors had convened the meeting to impress upon him the value of America’s alliances and its presence around the world.

The pretense of a tutorial backfired miserably. Trump raged, castigating the alliances as worthless and declaring Afghanistan a “loser war.”

He denounced the assembled officers as “losers… dopes… babies” and fumed “I wouldn’t go to war with you people.”

When news of the meeting leaked, the opposition denounced the episode as another example of Trump’s lack of fitness for the office.

To the average citizen, the episode was simply overdue.

For all the debate among decision-makers, academics, and experts, all Americans should recall the judgment of a lieutenant colonel only six years after America went to war. Finding American generals deficient in “creative intelligence and moral courage,” the officer lamented that the lack of accountability was the most dispiriting — “as matters stand now, a private who loses a rifle suffers far greater consequences than a general who loses a war.”

In that statement is the crux of civil-military relations. Trust is paramount, but accountability is the foundation.

Did he grasp the imbalance in the relationship better than his more “sophisticated” contemporaries? Yes.

After American forces withdraw completely from Afghanistan in September, the civil-military relationship will be unencumbered by war and informed by the lessons of undue deference – a new test awaits.

R. Jordan Prescott is a private contractor working in defense and national security since 2002. He has been published in RealClearDefense, The National Interest, Small Wars Journal, and Modern War Institute.