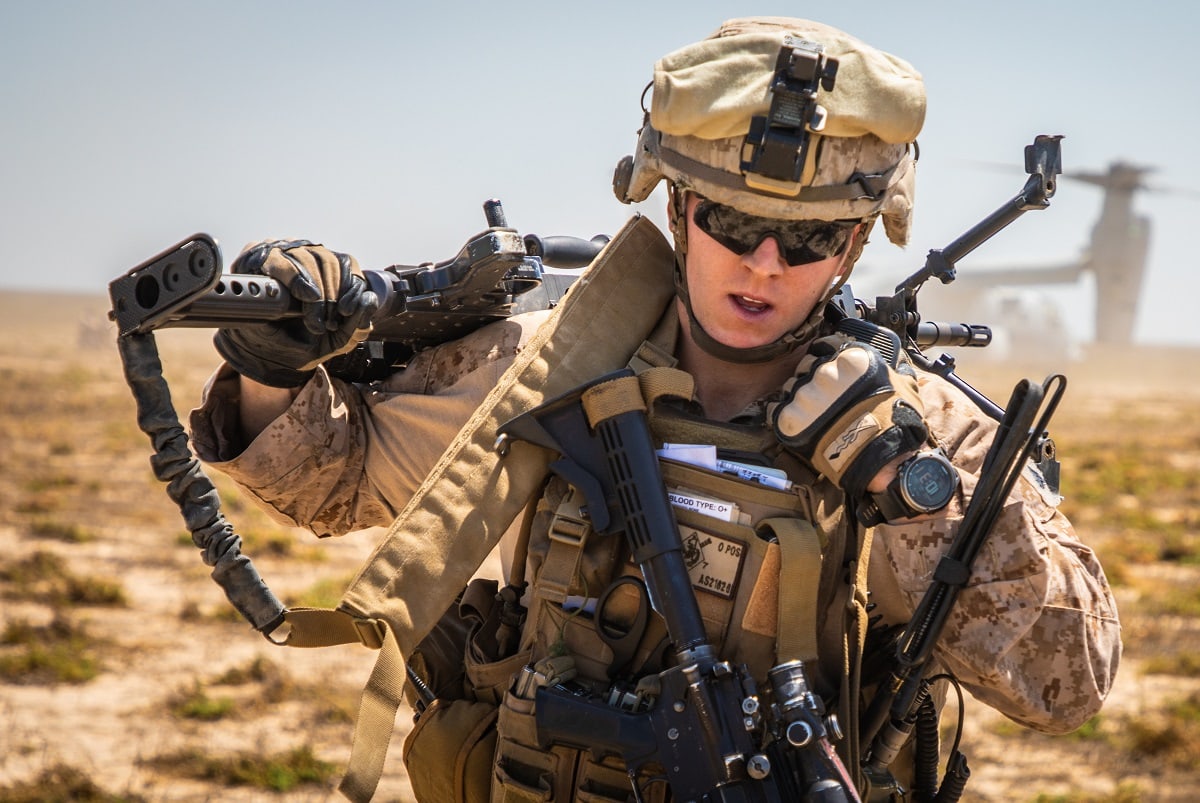 A U.S. Marine assigned to the Special Purpose Marine Air-Ground Task Force-Crisis Response-Central Command (SPMAGTF-CR-CC) 19.2, relays a message over a radio during a tactical recovery of aircraft and personnel (TRAP) exercise on Karan Island, Kingdom of Saudi Arabia, April 23, 2020. The exercise affords the SPMAGTF an opportunity to sustain its critical mission capabilities, demonstrate its ability to rapidly respond to emergent threats and crises, and improve its ability to project power in the maritime domain. (U.S. Marine Corps photo by Sgt. Kyle C. Talbot)

U.S. combat forces came under attack in eastern Syria last weekend, in what is becoming almost a daily event in both Iraq and Syria. Again, no American casualties resulted from this attack – but it is just a matter of time before one of these strikes happens to land on target and U.S. troops are killed. When that happens the pressure on President Joe Biden to make a forceful response will become enormous, raising dramatically the chance of spawning a destructive war that could severely – and unnecessarily – harm our interests.

Before that happens, President Biden should end these small missions as soon as is practically possible and withdraw all our troops. There is no threat to our security in either Iraq or Syria that could be mitigated by the presence of these two small contingents. There is, therefore, no reason to keep the men and women of our Armed Forces in harm’s way and every reason to withdraw them quickly.

There have already been more than 50 separate attacks against U.S. troops in Iraq and Syria this year alone. Miraculously, there have only been a few who have suffered slight wounds. Just months into his term, Biden has already twice ordered airstrikes into Iraq and Syria to punish those allegedly responsible for those 50 attacks.

Pentagon Spokesman John Kirby told reporters in February that Biden’s first strike was intended to send “an unambiguous message: President Biden will act to protect American and coalition personnel.” Following the strikes in June, Kirby added that the intent of that action was to, “send a clear and unambiguous deterrent message.”

Yet that message has not only failed to resonate, the airstrikes have predictably elicited vows of retaliation and “open war” against U.S. troops. The militia have thus far made good on their vows, launching more attacks since the second round of airstrikes than before.  Biden is already coming under increasing pressure to launch more and stronger attacks.

Oklahoma Sen. Jim Inhofe released a statement on Saturday arguing that, “Iran-backed militias’ continued assault on U.S. personnel in Iraq cannot be tolerated,” and complained that Biden’s “bare-minimum, tit-for-tat approach that is failing to deter Iran or its militias and puts American lives at increased risk.” But would a more muscular approach “deter Iran” as Inhofe and others contend? Overwhelming evidence confirms that the answer is an authoritative no.

Such a mentality was the core underpinning of the so-called “maximum pressure campaign” that the previous administration used to such disastrous effects against Iran. Advocates of the strategy always claimed that the U.S. “would get a better nuclear deal and moderate Iran’s foreign policy.” Instead, all it produced was a far more intransigent Iran, pushed them into making more bomb-making nuclear material, and raised the possibility of war.

In January 2020, Trump ordered the death of Iranian military leader Qassim Soleimani. Afterwards, Trump said the, “Iranian regime’s aggression in the region, including the use of proxy fighters to destabilize its neighbors,” led him to order the strike, and warned Tehran that its use of proxy fighters, “must end and it must end now.” Like the failure of maximum pressure, this strike has had the opposite of its intended effect, as the Iran-backed militia have been more, not less, active since that strike. The American troops in both Iraq and Syria are the bill payers for such misguided hopes, as they are near-daily targets of enemy rocket and drone attacks, yet are providing no benefit or security to America.

U.S. troops should only be deployed – should only be asked to put their lives and limbs at risk – when vital American interests or our direct security is at stake. Such a standard should be self-evident, but because of decades of routine overuse, sending or keeping combat troops deployed abroad has become the unthinking status quo. Any deviation from that norm causes some in Washington to immediately argue against withdrawal from any location, irrespective of whether such a deployment is justified or not.

In the case of our 900 troops in Syria or the 2,500 in Iraq there is no justification for risking our troops’ lives. The most prevalent reason cited for these deployments is in training the Syrian Democratic Force in Syria and the Iraqi Security Forces in Iraq. As an Army Major in 2009, I was tasked with leading a team to train an Iraqi battalion on the Iran/Iraq border. The Iraqis have learned, in the intervening 12 years, all they can from us. Its time for them to sink or swim on their own.

Daniel L. Davisis a Senior Fellow for Defense Priorities and a former Lt. Col. in the U.S. Army who deployed into combat zones four times. He is the author of “The Eleventh Hour in 2020 America.” Follow him @DanielLDavis1.