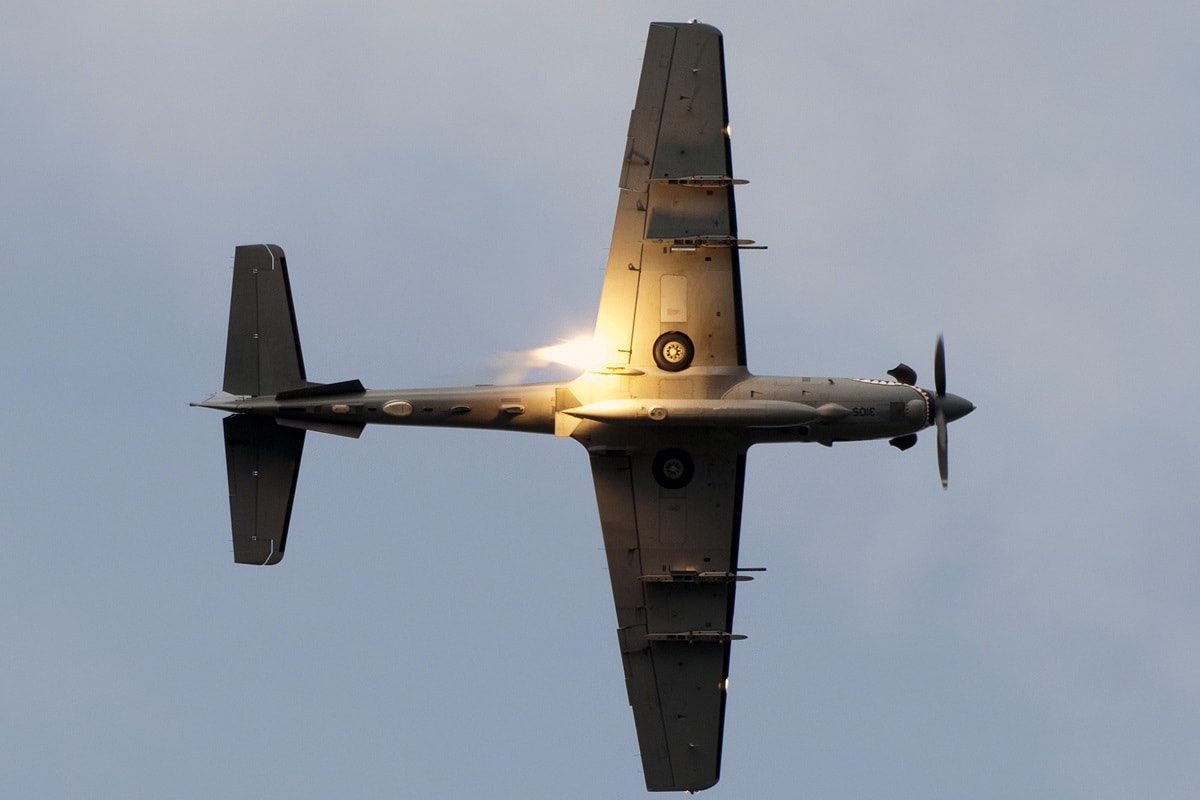 With the surrender of the Afghan government in Kabul, the Taliban is poised to inherit a substantial fraction of the Afghan Air Force (AAF) the United States spent over $8 billion dollars rebuilding since 2008.

Photographs posted on social media and compiled by the Oryx Blog confirm that the Taliban has already captured intact at least twenty-four helicopters, seven Boeing ScanEagle drones, and two airplanes as of Thursday according to a count

U.S. intelligence claims the full number may be closer to thirty to forty. But given the 211 aircraft in the AAF inventory, at least 167 of which were deemed to be in flyable condition as of June 2021, the final count may be considerably higher. Also to be considered are dozens of helicopters and aircraft operated by the Afghan’s military Special Missions Wing and seven State Department CH-46E helicopters used to evacuate the U.S. embassy, which have been abandoned, though supposedly left in inoperable condition.

Flight of the Afghan Air Force

To be sure, not all AAF aircraft are falling into Taliban hands. AAF pilots and ground crews, many of whom were trained in the United States, arguably hold greater than average animus towards the Taliban, who sought to assassinate AAF pilots and threatened to murder their families if they continued flying combat missions or undergo flight training.

On August 14–15, reportedly 22 AAF airplanes and 24 helicopters carrying 585 persons between them fled over the border to Uzbekistan, where they landed at Termez airbase, or force landed short of there due to lack of fuel.

The Uzbek government reported (and later denied) that one A-29 Super Tucano attack plane collided with an escorting Uzbek MiG-29 fighter, with the Uzbek and Afghan pilots both successfully ejecting and being treated for injuries. There is also an unconfirmed report that Uzbek air defenses shot down an Afghan light utility/transport aircraft or Super Tucano.

Meanwhile, on August 16 two helicopters and three more airplanes (likely including one or more of the four C-130 Hercules transports operated by the AAF) transporting 143 passengers landed in Bokhtar, Tajikistan. It’s also possible some helicopters flew to the Panjshir valley, where an anti-Taliban army is organizing.

The fate of the rest of the AFF’s Super Tucanos, C-130 transport planes, and forty-five Black Hawk helicopters is unclear. However, the withdrawal of foreign contractors earlier in 2021 caused the serviceability of U.S.-built aircraft to sharply decline, so some may not have been flyable on short notice when the decision was made to flee.

In fact, the Taliban may get a second air force, as the group deployed an air arm between 1995 and 2001 that significantly impacted the Afghan civil war.

After the fall of the Soviet-backed Afghan government in 1992, warlords commanding various factions (notably Abdul Dostum, Gulbuddin Hekmatyar, and Ahmad Shah Massoud) soon turned against each other, each forming their own air arms composed of the left-overs of the Democratic Republic of Afghanistan Air Force.

Taliban MiGs destroyed two Mi-17 helicopters delivering supplies to Massoud’s forces in June 1995, one with gunfire, the other a maneuver kill. In another incident, a Taliban MiG-21 fighter forced down a Russian Airstan Il-76 cargo plane transporting supplies to a rival faction. The Taliban held the crew hostage for a year before the Russian managed to overpower their guards during a lunch break and escaped with their Il-76.

Later that year, in October, the Taliban used its MiG and Sukhoi jets to hammer the forces of the warlord Massoud. Six were shot down over Maydan Shah, Kabul, and Kandahar, including one Su-20 downed by a Northern Coalition MiG-21. But by the end of the year, both Massoud’s and Dostum’s fighter forces were completely spent and the Taliban managed to take Kabul and Bagram Air Base supported by strikes from Su-22s.

With aid from Pakistan, the Taliban revitalized its dilapidated aircraft and mounted new offensives in 1998 and 2000-2001 to capture territories still held by the Northern Alliance. During these operations, fighter bombers sorties peaked at 160 strikes, interdiction, and close air support sorties a week in. This came at the cost of eight MiG-21 and Su-22 jets shot down by man-portable Strela-3 surface-to-air missiles.

Separately, the Taliban operated an “airline” with jetliners and Antonov transport which proved vital for ferrying in weapons and volunteer jihadis from the Middle East, and shuffling troops to the frontline in Afghanistan.

By 9/11 in 2001, the IEAAF counted around seven hundred personnel with major bases at Jalalabad, Kabul, Kandahar, and Shindand, and disposed of twenty-one MiG-21s and seventeen Su-22s, though only eight of each were estimated to be in flyable conditions revealing the difficulties the Taliban’s pariah state in maintaining its aircraft. The Taliban had in effect used its airpower intensely, but unsustainably. There were also five L-29s, and four Hind helicopter gunships, and eleven Mi-17s.

All of the Taliban warplanes were destroyed in the initial week of U.S. bombing, without a single aircraft even attempting to make it off the ground.

Unlike in the 1990s, the Taliban today lacks access to supersonic fighters with serious air-to-air capability, though the Super Tucano may be usable against light aircraft and helicopters.

Overall its air force will be primarily useful for fighting domestic adversaries rather than foreign militaries by facilitating rapid deployment of ground troops, performing surveillance/reconnaissance missions, and striking anti-Taliban insurgents within Afghanistan.

Captured aircraft may also be sold for profit to foreign buyers interested in studying and duplicating U.S.-built sensors installed in aircraft like the AC-208 Combat Caravan, A-29 Super Tucano, UH-60 Black Hawk, and Pilatus PC-12, even if they aren’t exactly cutting edge airplanes.

The Taliban’s biggest confirmed air asset currently are eleven Russian-built Mil Mi-17 utility helicopters which fulfill general purpose roles such as transporting troops, supplies, and critical personnel to remote locations and providing scouting/fire support in a pinch. Afghan mechanics are highly familiar with the Mil Mi-17, and spare parts should be relatively easy to come by.

At least four higher performance but lower capacity U.S.-built UH-60 Black Hawk helicopters have also been captured, but these may prove difficult to maintain. After all, the AAF struggled to do so with U.S. support.

The AAF also had fifty MD-530F Cayuse Warriors scout/light attack choppers remaining by the end of June; Taliban photos appear to confirm the capture of at least eight. A modernized variant of the OH-6 Cayuse “flying egg” scout helicopter introduced in the 1960s, the MD-530Fs can mount two .50 caliber machine guns or 70-millimeter rocket pods on its wing stubs, and has a range of 235 miles.

However, Afghan pilots found the type highly unsatisfactory due to its lack of armor and gunsights, and underpowered engines incapable of flying over tall Afghan mountain ranges.

The Taliban has also captured at least one of the AAF’s five to eight Mi-35 Hind gunship helicopters (specifically, one donated by India). Armored, heavily armed, and not overly complicated, Hinds could prove a practical air support asset. The Taliban may be able to acquire some training and spare parts from Pakistan, which operates a small number of Mi-35M attack helicopters.

The Special Operations Wing also had twenty-three Swiss-built Pilatus PC-12 aircraft refitted by Sierra-Nevada for $218 million with signals-intelligence gear to spy on communications. So far, imagery confirms the capture of just one Caravan and no Pilatus PC-12 airplanes.

These aircraft have low operating costs and can operate from rugged landings strips, meaning they could be convenient for the Taliban’s purposes, though only one Cessna 208 is known to have been captured.

However, the Taliban did snatch at least seven out of over one hundred catapult-launched ScanEagle surveillance drones bequeathed by the United States for $174 million. Given the reportedly major difficulties the United States had training Afghan personnel to operate the Scan Eagles, they may prove difficult for the Taliban to exploit.

The biggest question mark remains the fate of the fleet of twenty-three or so A-29 Super Tucano two-seat attack planes. Photos show the Taliban captured one A-29 Super Tucano, which by itself isn’t that useful, but when factoring in the six to seven A-29 Super Tucanos that flew into Uzbek airspace seeking asylum, that still leaves around fifteen unaccounted for.

The turboprop-engine Super Tucanos, built by Brazil’s Embraer and U.S. company Sierra Nevada, superficially resemble World War II fighter planes with their .50 caliber machine guns and thirty-four-hundred-pound bomb load. But they incorporate relatively modern navigation and targeting systems, possess the endurance for eight-hour patrols and in theory are cheap to operate, if less so in practice.

Realistically, if the Taliban can get the A-29 Super Tucano in the air, lack of training and servicing will use the aircraft’s more advanced capabilities, though of course, they could still perform strikes with unguided weapons. Finding necessary spare parts could also prove difficult, though neighboring Turkmenistan operates A-29 Super Tucanos. Turkmenistan historically doesn’t like the Taliban, but spare parts might be acquired via corruption and smugglers.

The Taliban will likely have its hands full maintaining control of Afghanistan. The deposed vice president is attempting to organize an anti-Taliban resistance force in the Panjshir Valley, and the Taliban may continue to combat Islamic State elements too. Thus, the Taliban will likely seek to wield air power against these adversaries, just as the AAF did against the Taliban. If the Taliban can acquire the large cargo planes, then these could also give it airlift capability with which to transport volunteers, supplies, and weapons from abroad.

However, finding or training new pilots and mechanics will be a huge challenge, as will acquiring spare parts, fuel, and munitions needed to keep aircraft flying over the long term. Thus, the fate of the Taliban’s aviation will depend on how generous aid is from its patrons Pakistan and Qatar, its success in striking deals with hesitant but profit-minded countries like China, Russia, and Turkey, and ability to coerce or convert skilled Afghan pilots and mechanics to enter its service.