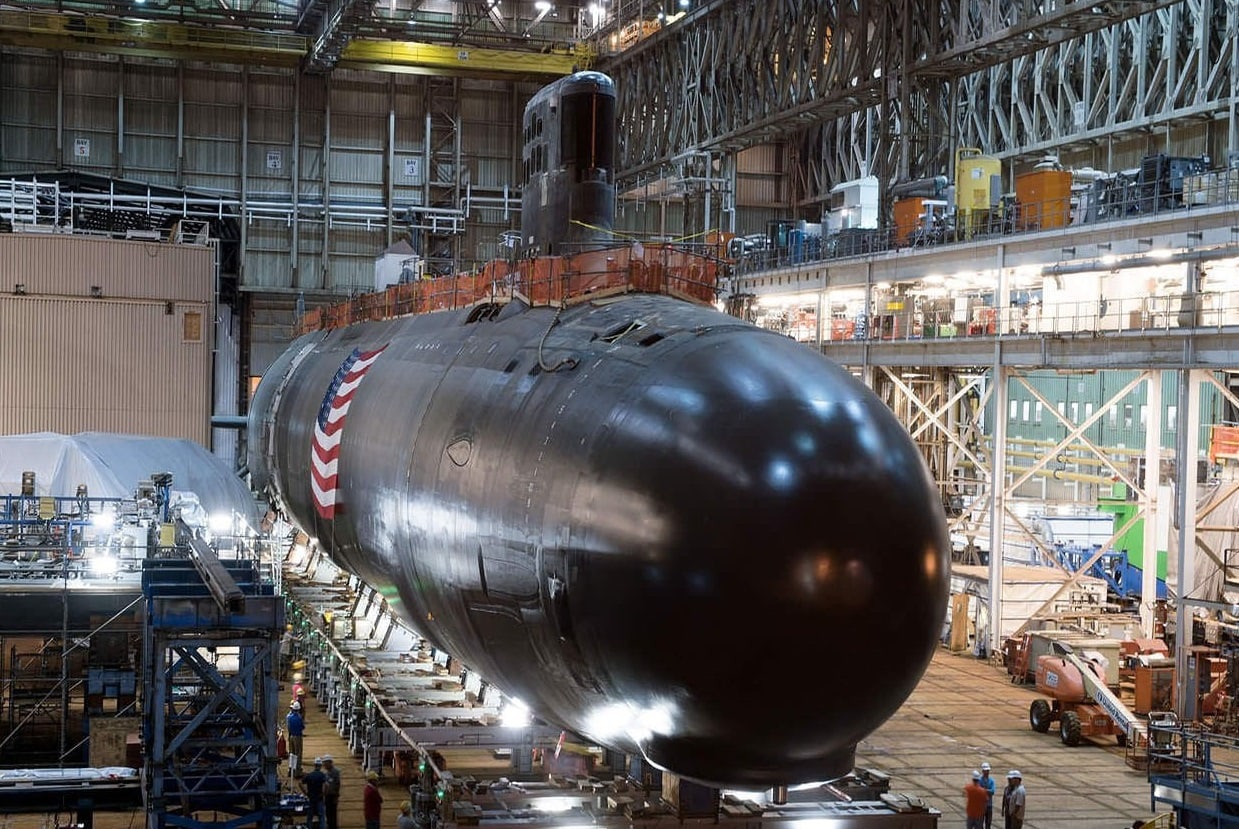 On Wednesday, U.S. President Biden and Prime Ministers Johnson and Morrison of the United Kingdom and Australia announced in a joint video conference the creation of a trilateral security pact called AUKUS which most immediately would seek to enable Australia to build and operate its own nuclear-powered (but not nuclear weapons-armed) submarines.

The announcement spells the end of Australia’s troubled program to procure twelve conventionally-powered Attack-class submarines from the French firm Naval Group. However, such a program may only begin after an eighteen-month period dedicated to hashing out the specifics of the arrangement.

Though the leaders claimed the AUKUS pact isn’t aimed at a specific country, it’s obviously driven by U.S. efforts to solidify a coalition to contain the expansion of the Chinese military in the Pacific. Indeed, the United States is also convening a meeting of the Quad alliance with Australia, India, and Japan next week. Australia, the United States, and the UK are also partners in the Five Eyes intelligence-sharing alliance also including Canada and New Zealand.

China’s rising military and economic sway has increased tensions between Beijing and Canberra, to the point of open contention and disdain. Beijing has asserted sovereignty over huge swathes of the South China Sea, in contravention to international law, and is establishing military bases in the Pacific and Indian Oceans to counteract the encircling ‘First Island Chain’ of U.S. bases and those of its allies.

The People’s Liberation Army (PLA) Navy’s surface fleet is growing very rapidly in quality and quantity, and it musters possibly the world’s largest submarine fleet with seventy boats, though only a dozen are nuclear powered and its submarines are considered to be fairly noisy.

Is there a precedent to such a deal?

The AUKUS pact has the potential to bind Australia more closely to the United States for decades to come. However, the Biden administration insists the deal is a ‘one off’ without potential extension or duplication to additional partners.

British Prime Minister Boris Johnson specifically alluded to the precedent of the U.S.-U.K. Mutual Defense Agreement of 1958, which saw the United States sell a complete nuclear submarine propulsion plant to London and ten years of enriched uranium fuel. This allowed the Royal Navy to deploy its first nuclear-powered submarine, HMS Dreadnought, just five years later powered by an American Westinghouse S5W reactor, followed by the Valiant in 1966 with a British-designed reactor. This agreement was last renewed in July 2014.

What are the advantages of nuclear-powered submarines?

A nuclear submarine typically costs three or four times the price of a similar conventional submarine, but can remain fully submerged indefinitely, doesn’t run out of fuel, can cruise and sprint much faster, and is more likely to avoid detection and thus survive enemy anti-submarine warfare.

That’s because conventional submarines use air-breathing diesel engines to charge their batteries, meaning every day or two a diesel-electric submarine must surface or rise very close to the surface and use a snorkel to suck in more air to run the engines. During this time, the sub is highly exposed to detection, as the engines are noisy and even the snorkel is detectable on radar.

Furthermore, a conventional submarine’s batteries exhaust more rapidly when it is running anywhere near maximum speed, typically in the low twenties miles-per-hour. That means when traversing long distances, they usually cruise at much slower speeds of seven to fourteen miles per hour.

By contrast, a nuclear-powered submarine instead draws power from a nuclear reactor generating huge amounts of energy and even air for the crew to breathe. That means it can remain submerged indefinitely without exposing itself to charge batteries or refuel.

Furthermore, modern nuclear-powered submarines can achieve and indefinitely maintain speeds of thirty miles per hour or faster, matching or exceeding the flank speed of most surface warships, though they likely will cruise slower for acoustic stealth. Still, high speed is useful for intercepting surface warships, or outmaneuvering or chasing down an adversary submarine.

To be fair, submarine warfare is more often decided by stealth rather than speed, and diesel-electric submarines can execute deadly ambushes if they can creep into position undetected. Furthermore, in the Pacific, China, Japan, Singapore, and South Korea operate non-nuclear air-independent propulsion submarines and/or subs with lithium-ion batteries, which somewhat bridge the underwater endurance gap between diesel-electric and nuclear-powered submarines.

Notably, the maritime chokepoints of the Singapore and Sunda Straits lie roughly 2,500 and 1,900 miles away from the Rockingham submarine base in southwestern Australia. Currently, Australia’s six Collins-class submarines have a maximum range of 10,000 miles at periscope depth, meaning they may consume between a third and half of their fuel on transit alone.

Factoring fuel costs and days lost transiting at slower speeds, a smaller force of nuclear submarines might generate more days on station, and in wartime, be less vulnerable to detection and possible destruction in transit.

Are there nuclear proliferation risks?

Nuclear weapons and nuclear propulsion are not the same thing. However, some in the arms control community fear the latter could serve as a gateway drug to the former.

That’s because most nuclear-powered submarines use Highly Enriched Uranium (HEU) for fuel, meaning it has a twenty percent or higher concentration of Uranium-235. By definition that also qualifies as weapons-grade uranium, though in reality most weapons-grade grade uranium is enriched up to ninety percent.

Submarines can instead use Low Enriched Uranium (LEU) at between .7 and 20 percent density, but ironically the only countries with experience operating LEU-fueled submarines are France and China.

James Acton of the Carnegie Endowment for International Peace argues that Australia’s pursuit of HEU-fueled submarines could tear open a loophole in the Non-Proliferation Treaty: an exemption for weapons-grade materials ostensibly reserved for  ‘non-prescribed military activity.’ That could create a precedent by which countries like Iran, Saudi Arabia, or South Korea could produce weapons-grade materials under the guise of using them for submarine nuclear propulsion.

That said, it’s debatable just how much additional wind Australia’s move would put in the sails of countries already inching towards nuclear weapons capability for their own reasons.

French company Naval Group was reportedly blindsided and angered by the announcement, which almost certainly nixes a 2016 deal to build twelve conventionally powered Attack-class submarines, the first to enter service in 2034 with the rest following in two-year intervals.

That program had been bedeviled by slow progress and cost overruns for several years, however, and in the last year, it was reported that the Australian military was exploring alternatives. One issue was that Australian shipbuilders wanted a larger share of the construction than Naval Group was amenable to.

Furthermore, delays and cost overruns have lead estimated program costs to increase from around $40 billion to $70 or even $90 billion. This was peculiar because Naval Group is building a nuclear-powered Suffren-class variant of the same base design for roughly $2 billion USD apiece,  apparently much more cheaply than Australia’s non-nuclear variant.

It shouldn’t be taken granted that an Australian nuclear submarine program will succeed due to the high costs and complexity of building and operating nuclear submarines, as well as the rocky political-economic dimensions of transferring sensitive tech and splitting up lucrative industrial workshare.

Operating nuclear submarines will require Australia to build extensive specialized physical infrastructure, recruit highly-trained personnel and form the educational programs needed to train more. Australia doesn’t entirely lack the scientific foundations (see below), and U.S./UK assistance would be massively helpful, but those overhead costs still surely can be counted in the billions of dollars.

Australia could theoretically save on development costs by acquiring, say, lightly customized U.S. Virginia-class attack submarines. But Canberra will want to ensure its domestic shipyards receive a large share of the multi-billion dollar unit production costs to protect its shipbuilding industry and retain a lasting indigenous production capability.

That means a very tricky work-sharing and technology-transferring arrangement will need to be hammered out. It’s also worth noting that U.S. shipbuilders can’t currently build submarines fast enough to meet U.S. Navy demands, and may lack the spare capacity needed to fulfill procurements for Australia too. These are similar to issues that torpedoed the non-nuclear submarine deal with Naval Group.

A Brief History of Nuclear Australia

Australia doesn’t have nuclear weapons or civilian nuclear energy but nonetheless has been associated with nuclear energy and weapons development. After all, the Land Down Under is sitting on roughly one-third of the world’s uranium supply and is the world’s third-highest producer of uranium fuel, all for export.

Instead, in 1958, Australia began operating the ten-megawatt High Flux Australian Reactor (HIFAR) in the Sydney suburb of Lucas Heights. HIFAR was replaced in 2007 by the twenty-megawatt Open-pool Australian Lightwater (OPAL) research reactor involved in producing medical radioisotopes and conducting other research activities.