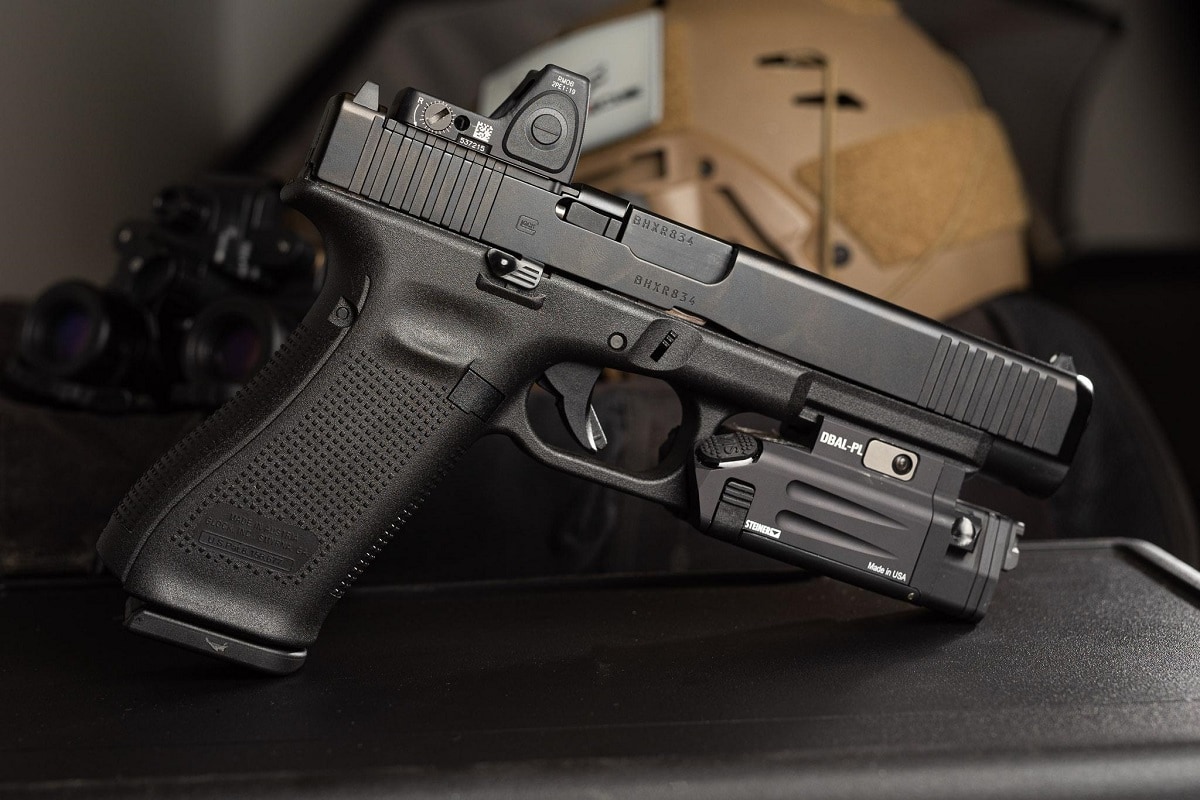 Glocks have a history of being one of the absolute most popular firearms used in shooting competitions. They’re highly customizable, offer some incredible reliability, and have almost become the standard for shooting sports.

The Glock 34 brings some killer changes that really make it stand out as a firearm used for competition. Some might even say it was made with shooting sports in mind. The question is if it’s worth a buy, even if you don’t shoot competitively. Read on to find out more about the Glock 34.

The first thing you’ll notice about the Glock 34 is the size and somewhat goofy-looking dimensions, as far as Glocks go. The 34 features an almost comical eight inches and change. Everything else is very much classically Glock styled. Now, while I will hold to the opinion that it looks a little silly, I’ve got to say that I really love the looks anyway. Well, mostly. I’m not a huge fan of the slide cut-out up top. I get its purpose, I just don’t like it that much.

Of course, this change in slide and barrel length are not pointless changes. With a longer barrel (5.3 in.) you’ll see some impressive accuracy from this pistol. On a really good day, I could tag targets in sub-1 inch groups, but averaged within 2 inches at 25 yards. Not bad! The Glock 34 would for sure be a killer if you took it to a shooting competition. I found it to be pretty laser-like after I slapped a red dot onto it.

Recoil is also a little softer, even for a Glock. Compared to the Glock 17 (the full size and smaller version of the 34), the kick is less and it’s pretty easy to get a solid sight picture so you can hit faster follow-up shots. This lack of recoil really sets it apart for potential shooting sports.

One thing I wouldn’t even touch with the Glock 34 is using it as a carry weapon. It’s too big and wildly uncomfortable to carry around, especially as a concealed weapon. I knew it was pointless to try to conceal, but I had it make sure. No chance I would use the 34 as a carry weapon. Outside the waistband is okay, but open carry is not something I’m interested in.

Everything else about this pistol is classic Glock. The looks, performance, and reliability are exactly what you expect them to be. Price is a little hiked up at around $630 for a Gen 3, but it could be well worth it if you’re a competitor.

I don’t compete often but I love the Glock 34 just the same. It’s just a lot of fun to be dead accurate without too much effort. It’s not really an option for concealed carry, but that’s not what it was created for. It was made for accurate shooting and it does that perfectly.