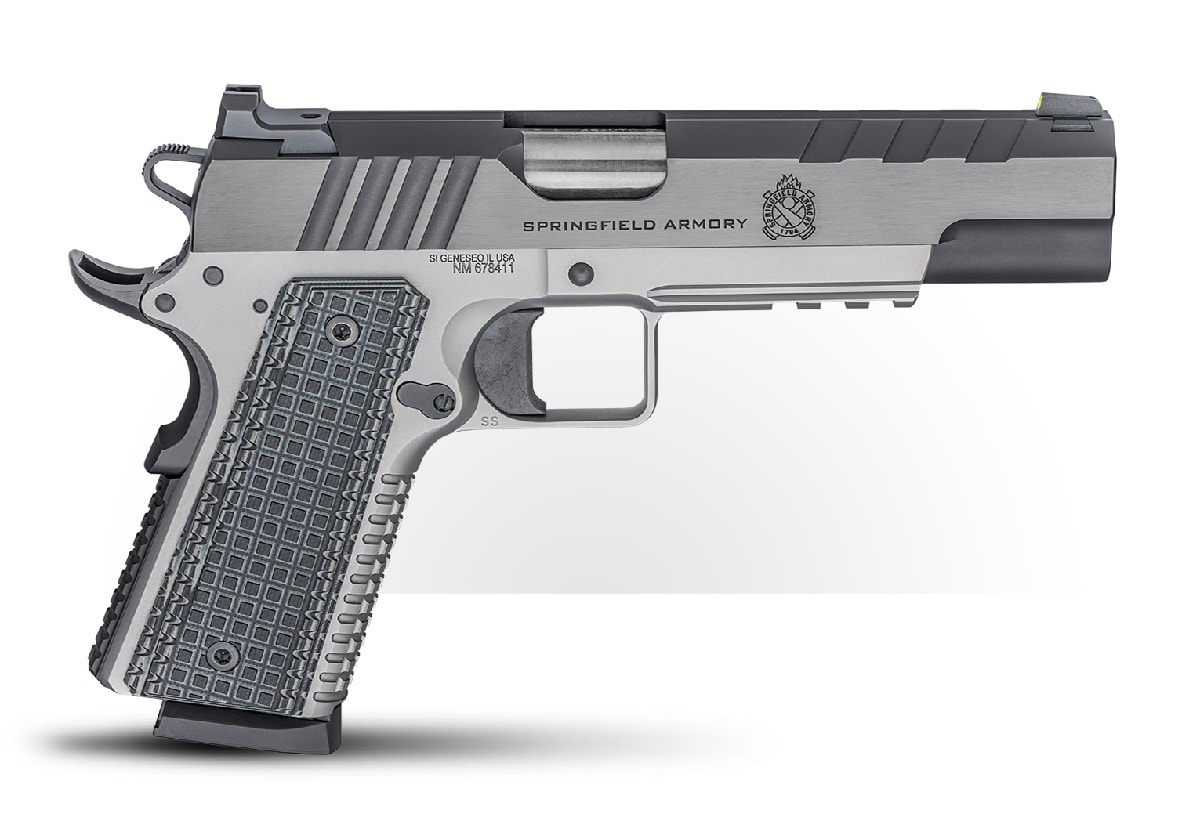 Apart from Thomas Edison’s light bulb, few products have endured for more than 100 years largely unchanged. But then there is John Browning’s Model 1911 .45 pistol – which he developed for Colt’s Manufacturing. Now more than 110 years since the gun first hit the market, dozens of companies have offered their own take on the classic with mixed results. For every hit there were some that were clones, mere shadows of Browning’s design.

This year, Springfield Armory released the newest addition to its award-winning series of 1911’s with the fittingly named “Emissary.” It was designed to bridge the gap between duty and custom handguns, while being a capable 1911 pistol for the defense-minded with features intended for those who really love to shoot. It retains the classic design and elements of the original M1911 with true 21st century features.

The Springfield Armory Emissary 1911 features a forged stainless steel frame with a unique “grenade-pattern” texturing on the front and backstrap for enhanced handling even in adverse conditions, and it is matched with a slim line grips panels by VZ Grips machined from G10. A three-slot picatinny accessory rail on the dust cover provides plenty of room to attach accessories such as lasers, weapon lights and training modules. The slide is also forged of carbon steel with polished flats and a blued finish that nicely contrasts the subdued matte finish of the frame.

The slide’s ‘Tri-Top’ cut was designed to give the Emissary custom styling, while a flattened top strap is finished with 40 LPI serrations to diffuse light and reduce glare. On top of the handgun are the tritium and luminescent front sight, which is paired with a Tactical Rack U-Dot rear sight for easy target acquisition in all lighting conditions. According to the company, the bushingless heavy stainless steel bull barrel can ensure maximum accuracy while reducing felt recoil and muzzle flip. In addition, the Emissary’s ‘skeletonized’ hammer is meant to deliver ultra-fast lock times and combines with a solid-body, flat-faced trigger for top-end performance. The pistol’s distinctive squared trigger guard was also designed to provide ample room for ease of operation with a gloved hand.

“This newest addition to the 1911 family of pistols provides an excellent option for a defensive handgun with an additional measure of refinement,” said Steve Kramer, vice president of marketing for Springfield Armory. “The modern features on this classic pistol platform make this a must-have for 1911 lovers and anyone who wants a top-of-the-line defensive pistol.”

The 5-inch bull barrel of the Emissary 1911 is cut with a 1:16-inch twist rate. Unloaded, the Emissary weighs 40 ounces. It measures 8.4-inches long and 5.25-inches high. Each pistol ships with two eight-round magazines. The Springfield Armory Emissary 1911 is available now from select retailers for a MSRP of $1,279.