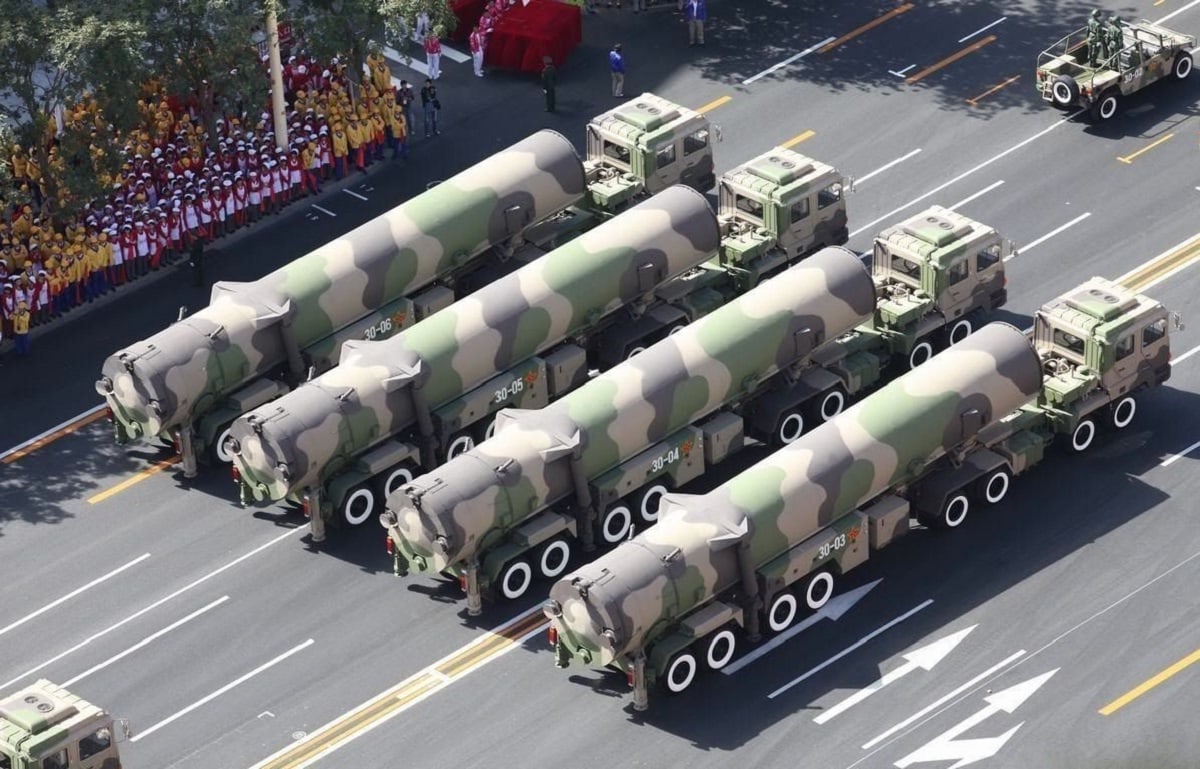 Earlier this year, freelance analysts in the United States confirmed vague Pentagon speculation since around 2018 that China intended to expand its force of land-based strategic missiles capable of reaching most or all of the US. These analysts found 120–145 newly constructed silos for such missiles—probably the DF-41, the newest in the Chinese arsenal. China has roughly 350 nuclear weapons of which about 100 are operational missiles capable of reaching the US, all with a single warhead. The DF-41 has been designed to carry multiple warheads, so these developments, taken together, foreshadow an uncharacteristically large and sudden surge in a critical Chinese nuclear capability.

What might have triggered this build-up? The most obvious possibility—and certainly a contributing factor—is that China fears falling too far behind the US (and Russia). US offensive nuclear forces have experienced relative neglect since the end of the Cold War—relative, in particular, to defenses against strategic nuclear missiles. But Russia’s determined efforts to thwart these defences and maintain a viable deterrent, combined with the growing inefficiency and safety concerns associated with aging US systems and the demise both of several arms-control agreements and of shared instincts to probe for new agreements, have resulted in a US commitment to a comprehensive modernization program. These developments will certainly have major consequences for China as well.

But another unprecedented package of considerations might also be coming into play. In recent times China has openly portrayed its system of governance as a viable alternative to liberal democracy. It has declared its intent to seek reform of the so-called rules-based order and reaffirmed its intention to persist with its more spectacular aspirations for geopolitical change, notably bringing Taiwan formally into the People’s Republic of China and confirming Chinese sovereignty over the South China Sea. Beijing will certainly be aware that each of these aspirations will constitute a supreme test of the tools available to sustain stability and peace and may well have concluded that a nuclear order more supportive of its interests would be a prudent investment.

China was the last of the five permanent members of the UN Security Council (China, France, Russia, the UK, and the US) to acquire nuclear weapons—in 1964, nearly 20 years after the first US test. The PRC initially sought refuge under the wing of the USSR but concluded from the experience of the Korean War and China’s probing in 1954–55 of US resolve with respect to Taiwan that Moscow was an unreliable security partner. Mao Zedong reportedly resolved in 1955 that China would develop its own nuclear weapons. Thereafter, Sino-Soviet relations descended towards an emphatic rupture.

Moscow threatened in 1964 (when China conducted its first nuclear test) and in 1969 (following major infantry clashes along the Sino-Soviet border in Siberia) to destroy China’s nascent nuclear facilities, to which the US signaled its strong opposition. Later, in 1972, we saw the rapprochement between Beijing and Washington, a relationship that acquired rather surprising breadth and depth and which survived several major shocks to endure until 2017.

Over the years 1950 to 1966, America’s nuclear posture (set out in what became known as the Single Integrated Operational Plan, or SIOP) viewed China as inseparable from the USSR and therefore a primary target for the nuclear forces the US maintained on continuous alert. Between 1966 and 1982, China was detached from the Soviet Union but remained a primary target. Under the Reagan administration, China was reclassified as a secondary target under the SIOP (and the Pentagon was even directed to prepare to provide military assistance to China in the event of renewed Sino-Soviet conflict). More than a decade later, however, in the second term of the Clinton administration, China was reinstated in the SIOP as a primary nuclear target. Then, in what could be regarded as America’s primary pivot to Asia and China, the succeeding Bush administration elected to switch the center of gravity of America’s nuclear posture from the Atlantic to the Pacific—including switching the home ports of five nuclear-powered ballistic missile submarines from the Atlantic to Bangor, Washington, on the Pacific Ocean.

The key point is that this trajectory of events allowed China to develop its own nuclear capabilities at a leisurely pace and to keep its aspirations modest in terms of numbers and variety. Nuclear-induced tensions with the US arose from time to time, but they stemmed primarily from various proliferation pressures (Pakistan, North Korea and Iran) rather than from nuclear threats that China could direct at the US.

This is the context that makes the discovery of the new missile silos unusual and worrying. This is true even if, as some analysts suspect, China intends to deploy a much smaller number of missiles and move them randomly between neighbouring silos to enhance their probability of surviving a counterforce attack. We may have to prepare ourselves for more of the same as China seeks a nuclear posture vis-à-vis the US (and Russia) that it feels can more reliably support not only its strategic objectives but also the prominent or pre-eminent role in the international system that it envisages for itself.