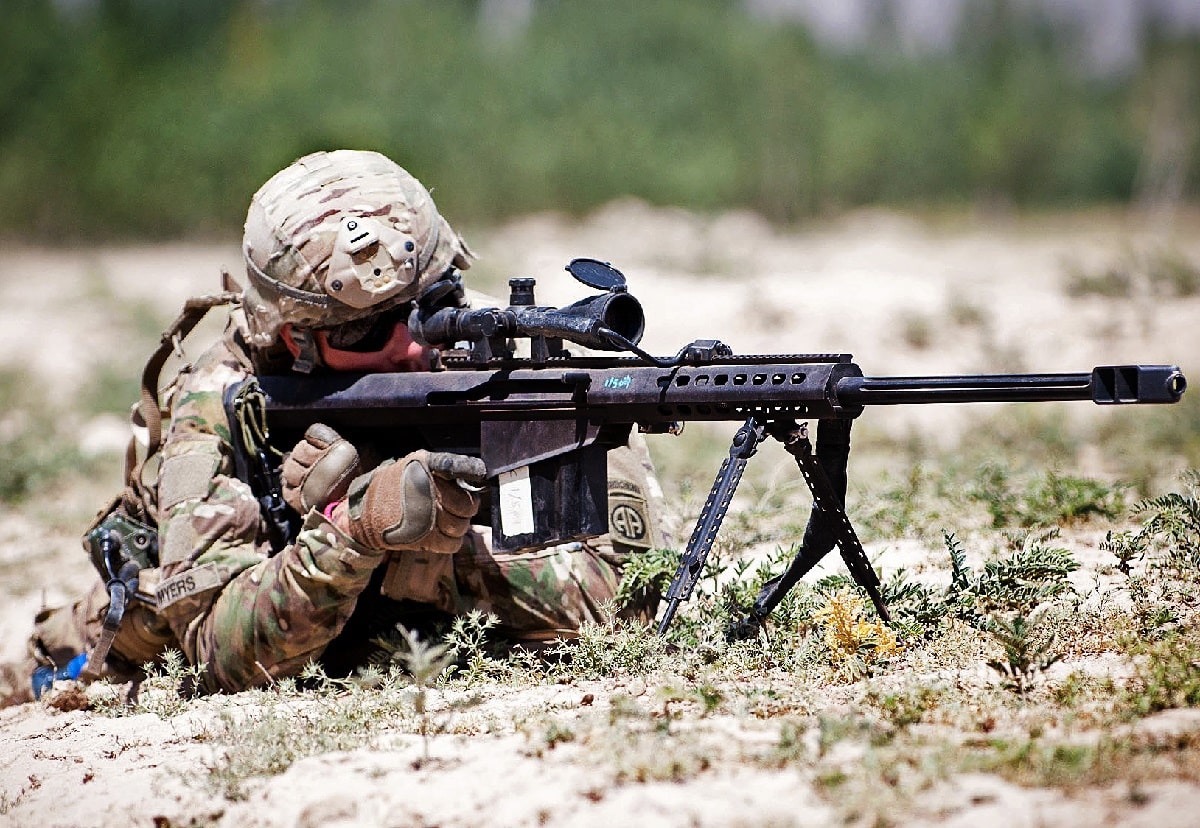 The Barrett M82 sniper rifle packs a hellacious punch. It’s a .50 caliber rifle and it shoots the same round as the M2 machine gun. The bullet it fires is an incredible 661-grain compared to 55-grain rounds used by the M4 assault rifle. The M82’s range is usually 1,400 meters, but experienced snipers can even engage targets at further distances.

The History: Barrett Had a Dream

Ronnie Barrett founded the Barrett Firearms Company in 1982 in Tennessee. He got the idea for a .50 caliber sniper rifle, but most gunsmiths he knew were skeptical. Undeterred, he drew his design in 3D and finally got someone to machine it. So, the M82 was essentially hatched in a garage by Ronnie Barrett. He placed an ad in a magazine, and it started to sell. It was bought by some important customers, such as the CIA, who supplied it to the Mujahideen fighting the Soviets in Afghanistan during the Cold War, and then the Swedish Army ordered some in 1989. Then starting in the First Gulf War, the Marines and Army started to buy it, and now it is in use by at least 60 countries.

What Kind of Hell Can It Unleash?

The M82 is known as a shoulder-fired “anti-material” rifle. It is not really for anti-personnel purposes. We’re talking overkill with the .50 caliber round. So, the M82 is better suited to shoot at buildings, vehicles, boats, and airplanes, or it can take on an enemy combatant hiding behind thick cover like a brick wall, for example.

The Barrett M82 has a magazine that holds five or ten rounds. This yields a pretty good rate of fire for a sniper rifle. The problem is that it’s heavy and long, so military personnel and law enforcement often carry it in a hard case. It weighs 28 pounds and even with a sling, it is fairly unwieldy. The .50 caliber sniper rifle became so popular that the Russians and the Chinese have their own models in their militaries.

But in the 1980s, the M82 was highly unusual and innovative because of its firing mechanism. The barrel actually recoiled backward after you pulled the trigger. This cycled the action, cocked the firing pin, and set up a new round from the magazine. Few guns acted this way.

Now the M82 is going to be replaced by the Barrett MRAD MK22 and you will see the old M82s slowly being phased out by the U.S. military. But M82s are still popular with law enforcement and the general public. I once fired a Barrett .50cal and it almost tore off my shoulder. I have no desire to do that again, but thankfully we have many professionals to do it for us.