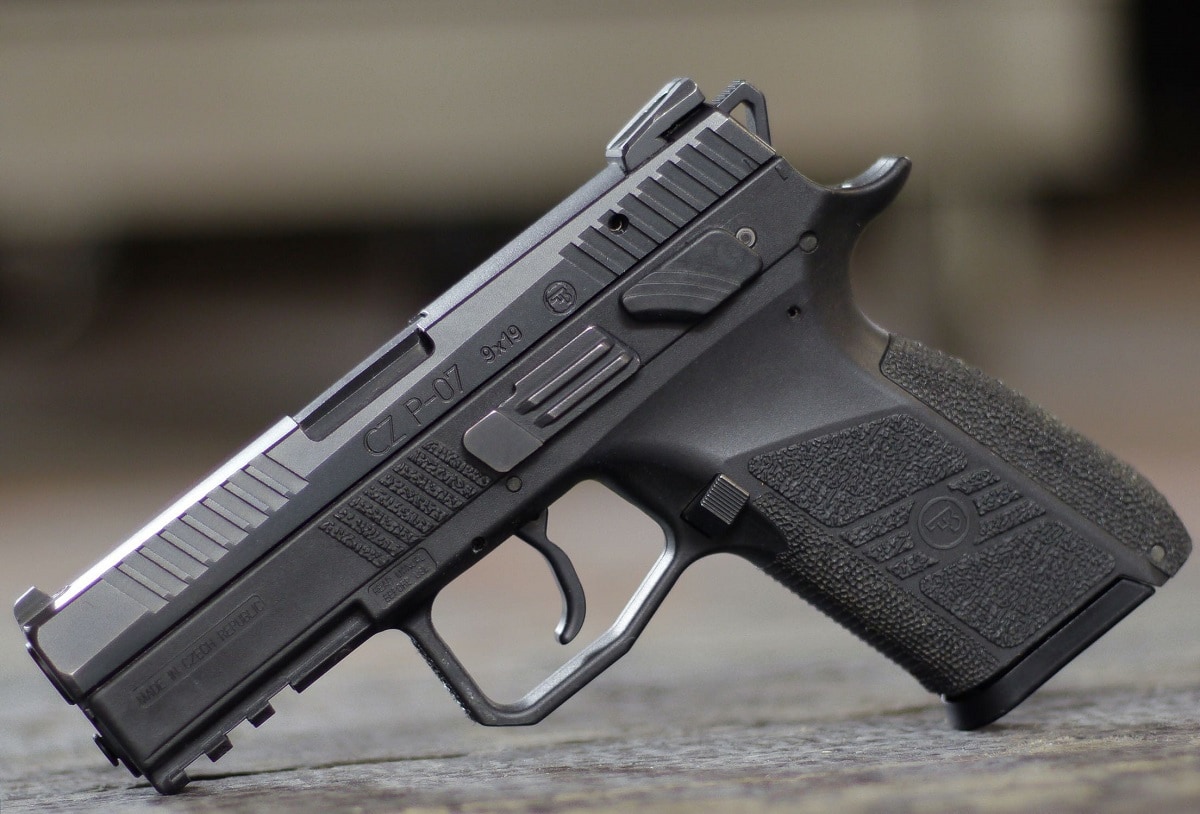 Anybody who likes firearms already knows CZ and they probably already have an opinion formed about them. Most would say CZ has an aptitude for making high-quality firearms. Their models are some of the most prolific and loved firearms out there. They’ve been on the radar forever, but really amped up their publicity with the P10C, a striker-fired compact pistol; a competitor to the Glock 19. But that’s not what’s in my EDC now. The CZ P-07 is what sits in my waistband these days.

It’s a compact, hammer-fired, single-action/double-action pistol. I doubted it for a long time and almost traded it in, but that was before I really started drilling and practicing out on the range. So, should it replace your Glock? Maybe. It’s definitely not going to be sitting around in a safe. Read on to find out why.

Right off the bat, the P-07 is a beautiful pistol. It has aggressive slide serrations at the front and rear of a rather slim slide. The geometry of said slide is super appealing to the eye and sleek. It almost screams low-profile. Some weren’t fond of the grip texturing, but I found it to be perfectly acceptable, though I did end up adding some Talon grips for the cool factor.

It comes in the box with the Omega trigger system meaning you’ll be able to swap triggers with any other CZ featuring an Omega trigger. I did find the double-action trigger pull to be pretty gritty, but the single-action is much smoother. The single-action pull basically has no wall if you’re unfamiliar with the firearm. I did get used to it, but I have been going back and forth about swapping triggers.

The real draw to this pistol was the recoil. It has got to be one of the softest shooting and most controllable compact 9mms I’ve used in a long time. I’d attribute that to the small and light slide. The lack of recoil really just makes it a breeze to shoot and a whole lot of fun. It also aided in my accuracy as well. Shots are pretty easy to place under 25 yards and are going to be trivial once I equip a little red dot to it.

The P-07 has replaced my Glock for concealed carry. It’s definitely a matter of preference, but the CZ feels almost more refined. It’s easy to conceal and the recoil is a huge draw for me, especially when I’m considering potentially life-threatening situations. Even with a standard mag outfitted with a +2 base plate, it’s super low-profile. I can basically carry it anywhere.

There’s a ton of good to be said about the CZ P-07. I’m a fan of the price too; it’s only $480 brand new so it’s almost a budget gun without the budget feel. It brings a lot to the table including light recoil, a sleek look, and that sweet sweet CZ magic. It might stay my carry gun forever, but I don’t think it’ll be leaving my arsenal any time soon.