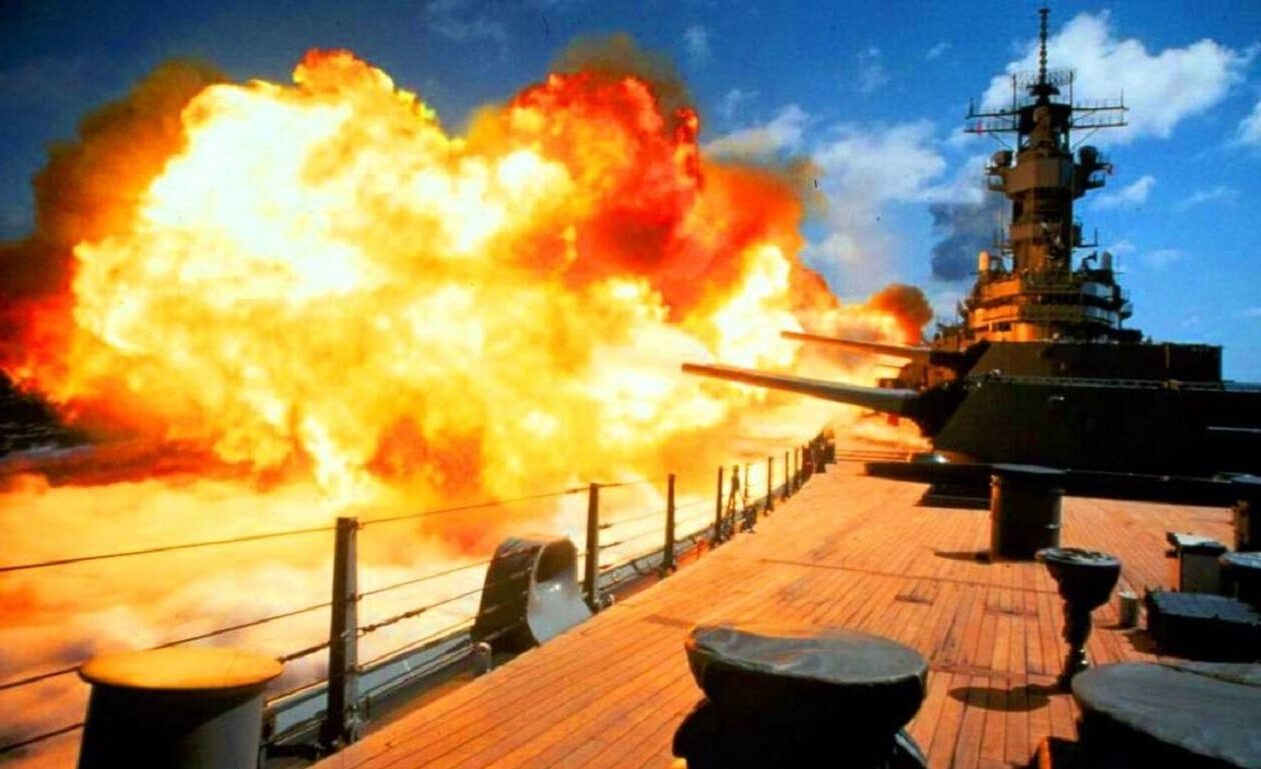 Throughout much of the inter-war era, the United States Navy was in essence reined in by restrictions placed on it due to a series of naval treaties. However, when it was evident that Japan would fail to ratify the London Naval Treaty of 1935, the U.S. Navy moved forward with a new class of warships that would succeed the South Dakota-class battleships.

As a result, battleship displacement was increased to a limit of 45,000 tons, and American designers sought to use the tonnage for extra power as well as protection rather than just for additional or more powerful armament. The new Iowa-class of “fast battleships” mixed speed and firepower and this enabled it to travel with a carrier force. Capable of reaching speeds of up to 33 knots, they were fast-moving, while heavily armed with nine 16-inch guns and 10 twin five-inch guns. Like all battleships, the Iowa-class carried heavy armor protection against shellfire and bombs, as well as underwater protection against torpedoes. Protection of the new battlewagons was on the same scale of the preceding class but was carefully designed along more conventional lines.

What Made the Iowa-class Battleships Great: The Big Guns

The United States Navy had considered to have reached an acceptable plateau when it came to the main armament of battleships, and although the armament was not actually increased in terms of caliber or number, it was improved in quality with the development of the new 50-caliber 16-inch (406mm) Mark 7 gun, which replaced the 45-caliber weapon that was used on the South Dakota-class. In addition, the Iowa-class battlerships used a new turret that saved almost 850 tons (864 tonnes) in total.

A common misnomer about the Iowa-class battleships is that it had triple gun turrets, but this is not correct. The turrets were actually “three-gun” and not “triple” as each barrel could be elevated and fired independently. Each gun could be elevated from -5 degrees to +45 degrees, moving at up to 12 degrees per second. The turrets could also rotate about 300 degrees at about 4 degrees per second.

Additionally, the Iowa-class battleships could fire any combination of guns, including a broadside of all nine. Another misconception is that the broadsides would require the ship to move sideways – it is really an illusion. The mass of the warship and the dampening effect of the water around the hull would have kept the ship stable and stationary.

While the film Under Siege shows a small handful of individuals operating one of the main guns, in reality, each turret required a crew of 79 men to operate. A small and untrained team probably wouldn’t have the success in hitting the target as was seen in the film, but that’s why movies require suspension of disbelief. However, what the film does get right is the compact nature of the turret and that is because the interiors were subdivided and designed to permit the independent loading, elevation, and firing of each gun. The rate of fire was about two rounds per minute – so while not quick, packed a considerable punch.

The Mark 7 gun fired two basic rounds, a 2,700 pound AP (Armor Piercing), which could penetrate up to 30 feet of concrete, and a 1,900 pound HC (High Capacity) shore bombardment projectile.

The silk bags of propellant and the projectiles are elevatored to this room from the powder magazines and the shell decks below and then loaded into the gun in the gun room. To fire it, the gunner and his numerous mates complete a carefully choreographed sequence of events, first sliding the projectile into the breech; and then gingerly placing the cylindrical silk bags of black powder, then ratcheting the breech shut. To protect the crew, an ominous red stripe on the wall of the turret just inches from the railing marked the boundary of the gun’s recoil.

The Iowa-class Battleships Fired Their Guns in Anger…A Lot

During the service of the Iowa-class battleships, the 16-inch guns had been used countless times – including during Operation Desert Storm when more than 1,000 rounds were fired in support of ground operations. However, on April 19, 1989, an explosion occurred in gun turret two aboard the USS Iowa (BB-61). Tragically, 47 crewmembers were killed, and an investigation concluded that Petty Officer Clayton Hartwig, a gunner’s mate involved in the operation of the center gun, most probably intentionally caused the explosion in such a way that he hoped it would appear to be an accident.