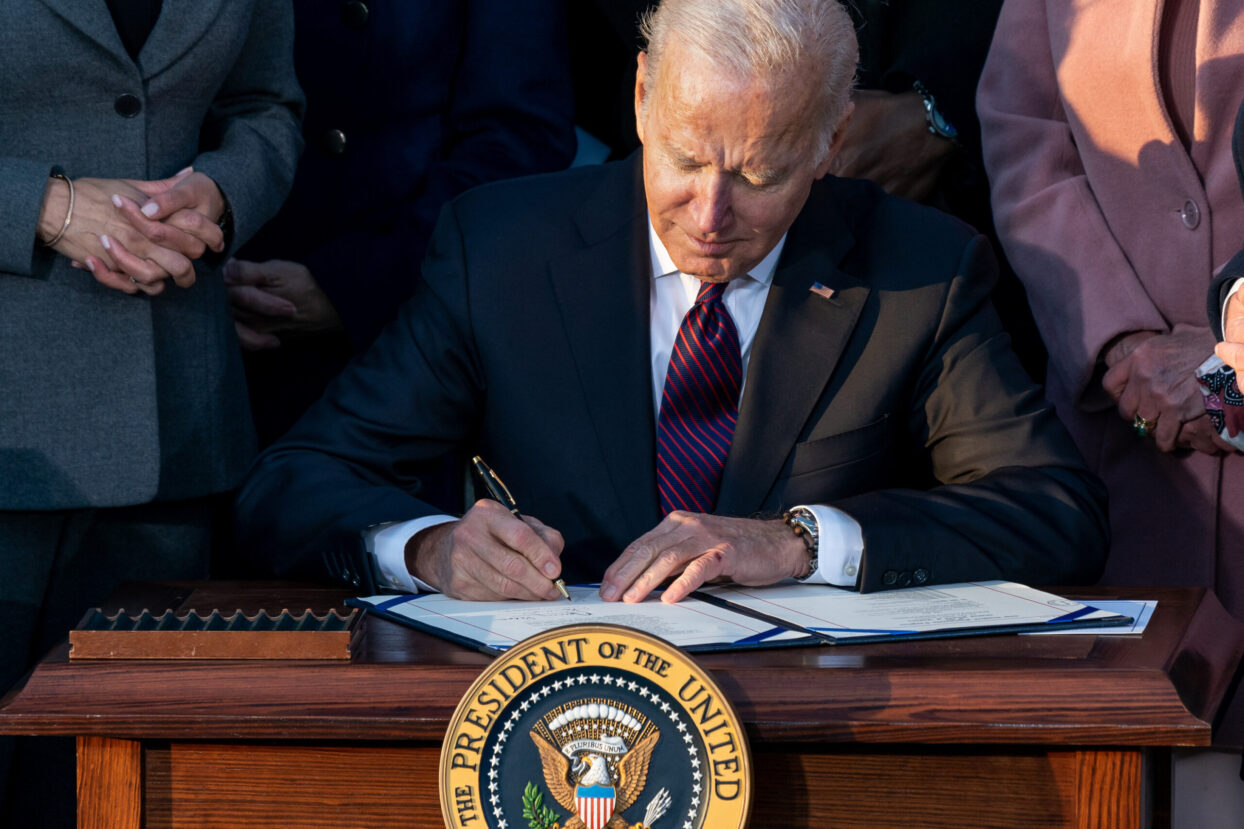 Two of Joe Biden’s immigration policy reversals have even created national security risks. His decision to lessen the protection of our Southern border has allowed a massive influx of illegal aliens, drug dealers, human traffickers and, quite possibly, terrorists. And by abandoning Trump’s merit-based immigration reform initiative, Biden has hobbled the U.S. in its technology race with China—something that carries undesirable economic and military consequences.

An open border is a serious national security risk

Open borders, where illegal aliens can cross with relative impunity, invite criminal activity. The flood of illegal border crossings since Biden has taken office is unprecedented. According to U.S. Customs and Border Patrol, monthly arrests at the border now number in the hundreds of thousands, a 30-year high. Criminals are among those caught at the border and then released. Many other criminals evade law enforcement at the border and enter the interior as well.

The Biden administration has adopted dramatically restrictive policies for law enforcement agencies whose mission is to remove these criminal and illegal aliens. Officers have been instructed to essentially turn a blind eye to many people who have no right to be in the country, including those who have been ordered removed by a judge. In May, deportations dropped to the lowest level on record.

The illegal population in the U.S. could expand by millions in Biden’s first year in the Oval Office—the direct result of Biden’s unfortunate policies. The administration has already encountered over 1.7 million at the border, a figure that does not include those who just slipped in unnoticed.

Weak border security and nonexistent interior enforcement, combined with promises of legislative or “de facto” amnesty, create powerful incentives for aliens to flock to the border and attempt to enter illegally. They feel they have a good chance to enter, remain and work in the U.S. without fear of expulsion, and also hold out hope for American citizenship.

The security consequences of porous borders and a broken and unforced immigration system are manifold. The impact on transnational crime is the most obvious. Illegal aliens are victims of a myriad of crimes from rape and robbery to human trafficking.

Further risks come from the control of the cross-border activity by cartels. According to research by the Department of Homeland Security, about 50 percent of border crossers in the 1970s used the service of smugglers. Today, that number is over 95 percent. Human smugglers charge thousands to tens of thousands of dollars per person to make their trek across the border. Under Biden, the cartels have made unprecedented profits.

The cartels then use these profits to finance other illegal activities. For example, the cartels are responsible for smuggling in most of the fentanyl entering in the U.S. This has fueled the opioid addiction and drug overdose epidemic in this country.

The terrorist threat is even more serious. Groups like ISIS and al Qaeda remain our enemies, and U.S. defense and intelligence officials have warned of a resurgent transnational terrorist threat after Biden’s chaotic and calamitous withdrawal from Afghanistan.

Terrorists could dispatch a team to the U.S. to stage an attack on the scale of 9/11. Today, the best way to infiltrate a team into the U.S. would be by crossing the porous southern border, hiding among the vast numbers of people crossing our border illegally.

President Biden curtailed further consideration of President Trump’s proposal to modernize our immigration policy by adopting a merit-based system. Instead, he wants to maintain our antiquated family ties system.

A 2017 study by the Mercatus think tank shows that, since 1965, the U.S. immigration system has been weighted toward family reunification. In the 2006–2015 decade, nearly two-thirds of all green cards issued went to immigrants who had a family member already in the United States. Another 21 percent were issued to refugees, asylum seekers, diversity lottery winners, and other smaller humanitarian categories.

President Trump announced his plans to modernize our immigration system in May 2019. He described our current system as largely based on “random chance,” and proposed a merit-based system. “We cherish the open door that we want to create for our country. But a big proportion of those immigrants must come in through merit and skill,” he said. “The biggest change we make is to increase the proportion of highly skilled immigration from 12% to 57% and we would like to even see if we can go higher.”

Merit-based immigration allows for family reunification but limits it to spouses and minor children. What it does not allow is bringing to the U.S. parents, grand-parents, and adult children. Neither does it affect humanitarian immigration; refugees would still be welcomed and victims of persecution protected.

The U.S. and China are engaged in a race for technological primacy. The winner will not only be the dominant economy of the 21st century, it will also become the world’s top military power. Communist China uses technology to oppress its people and to extend its censorship even to citizens of other countries. And Beijing already is using its growing military power to bully its neighbors. The American people cannot accept a world dominated by a brutal dictatorship that tramples on human rights and individual freedoms.

Winning the technology race with Communist China is not optional for the U.S. And a modernized immigration system would be a major contributor to this cause.

Last month, the National Counterintelligence and Security Center (NCSC) announced that it is focusing its industry outreach on a few technology sectors where the stakes are greatest for U.S. economic and national security. These tech sectors may determine whether America remains the world’s leading superpower or is eclipsed by China in the next few years. Among these sectors are artificial intelligence, bioeconomy, autonomous systems, quantum computing and semiconductors.

China recognizes the economic and military benefits of being the global leader in advanced technology sectors and has announced comprehensive national strategies to achieve this goal. China is also openly promoting civilian-military fusion to make sure that its military can take full advantage of all advances in civilian technology.

To address these challenges, America must not just allow top talent to come to America, it must actively recruit. China is already doing this through its Thousand Talents Plan.

Launched in 2008, the CCP claims the Thousand Talents Plan has thus far attracted more than 7,600 scientists and senior engineers to China. While the majority of these were Chinese-born returnees, the plan also attracted 390 foreigners. If the numbers reported by China are correct, the CCP may have spent around $1 billion on this plan.

During the Cold War, the goal was both to grow the U.S. economy and to deny Stalin’s Russia the use of these scientists for nefarious purposes. And when the Cold War ended, Washington funded grantmaking organizations to act as sponges for ex-Soviet scientists, lest they take up consulting jobs for nuclear programs in the Middle East and North Africa.

Another way to attract top technology talent from abroad is through a welcoming immigration system for entrepreneurs and investors. We need to cut the immigration red tape for foreign nationals who want to move to the U.S. to start new enterprises.

Current immigration policies are not what we need

Immigration policies should advance the freedom, security, and prosperity of American citizens as well as the immigrants themselves.

First, we need to return to the Trump era policies that secured our southern border—not just to stop the flood of illegal immigrants, but also to prevent transnational crime and terrorism.

Second, we need to modernize our immigration system through merit-based policies that will help America win the technology race with China and grow our economy.

Short of a major crisis, the Biden administration will not change its immigration policies. But the next Administration should be ready to move expeditiously when back in the White House.

Dan Negrea served at the Department of State between 2018 and 2021 as a member of the Secretary’s Policy Planning Staff and as a special representative for commercial and business affairs.

A Heritage Foundation vice president, James Jay Carafano directs research for the think tank’s Davis Institute for National Security and Foreign Policy. Dan Negrea served at the Department of State between 2018 and 2021 as a member of the Secretary’s Policy Planning Staff and as a special representative for commercial and business affairs.