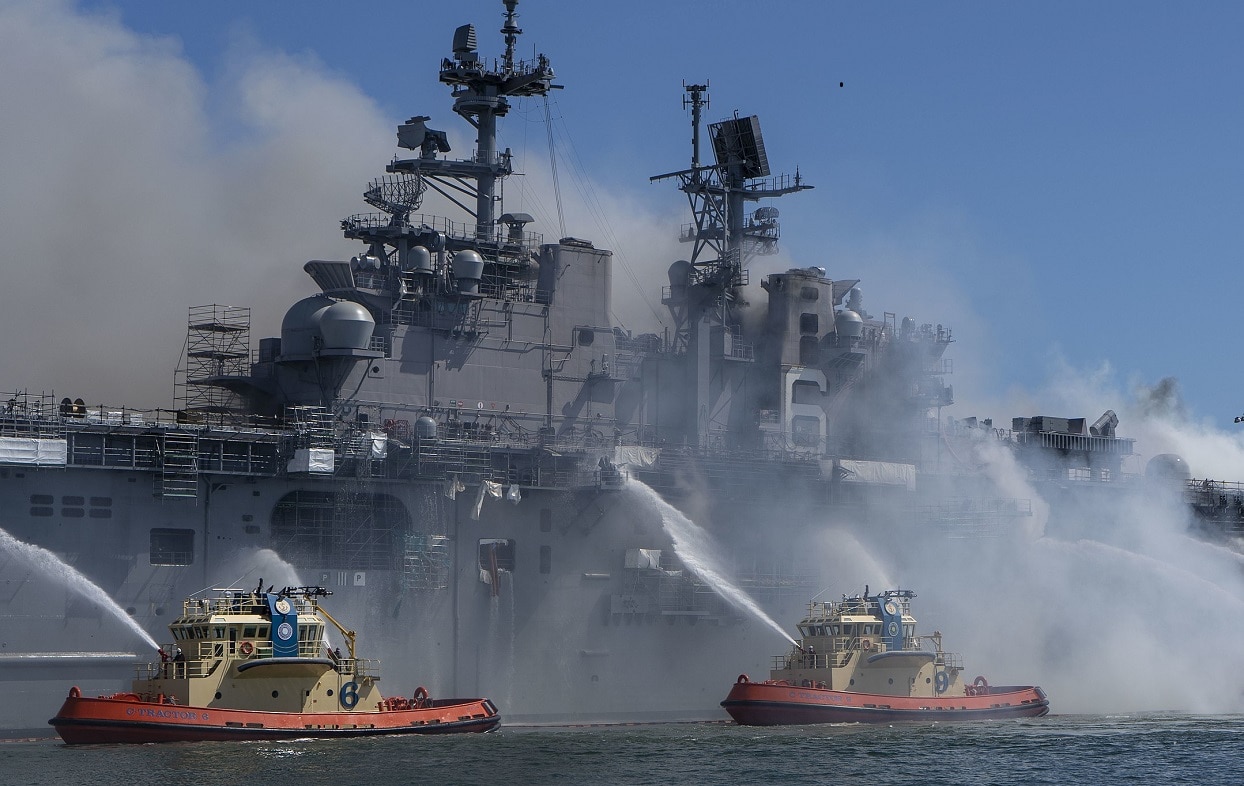 200712-N-BL599-1081 SAN DIEGO (July 12,2020) – Sailors and Federal Firefighters combat a fire onboard USS Bonhomme Richard (LHD 6) at Naval Base San Diego, July 12. On the morning of July 12, a fire was called away aboard the ship while it was moored pierside at Naval Base San Diego. Local, base and shipboard firefighters responded to the fire. USS Bonhomme Richard is going through a maintenance availability, which began in 2018. (U.S. Navy photo by Mass Communication Specialist 3rd Class Christina Ross)

Not long ago I watched a remarkable film titled Only the Brave. Someone mentioned it online, and it’s a firefighting movie. I’m a sucker for those, having fought fires in the navy many years ago. So on it came through the wonders of streaming. (Spoilers ahead.) I was slow on the uptake that night, and didn’t realize at first that the film is a dramatization of the deadly Yarnell Hill fire (2013). Or if you prefer, Sean Flynn has the story over at GQ. Read the whole thing. Warning: this is a feel-good story in many respects, but it does not have a happy ending. Just the opposite. The Yarnell Hill fire claimed the lives of nineteen out of twenty “Granite Mountain hotshots” who made up an elite firefighting squad based at the fire department in Prescott, Arizona. The disaster marked the most grievous loss of life among firefighters since 9/11.

The hotshots lived a nomadic life, traveling the southern and western United States to combat wildfires during fire season each year. The film is well worth your time, with solid acting from the likes of Josh Brolin and Jeff Bridges. It excels as storytelling. What struck me the most, though, is how well it shows how different firefighting is outdoors compared to indoors. The basics are the same. The “fire triangle,” sometimes referred to as the “fire tetrahedron,” is made up of fuel, oxygen, and heat, along with the chemical interaction among the three elements. Add an ignition source to set that interaction in motion, and you have a fire. Remove any element of the tetrahedron and you extinguish it.

Now, fighting fires on board ship is no picnic. Build a metal box, stuff it with combustibles and explosives, and add hot machinery, and you have a potential tinderbox—as the burning of the amphibious warship USS Bonhomme Richard last year in San Diego proved yet again. Shipboard firefighting generally involves smothering a fire, cooling down the surroundings, or interrupting the chain reaction among the elements of the fire triangle. Water, foam, and halon gas are some of the tools of the trade. So is ship design. Shipwrights subdivide a vessel’s interior with watertight bulkheads, doors, and hatches precisely so the crew can box in fire or flooding, limiting the spread of damage.

Fighting fires outside is another enterprise entirely. The outdoors is an open system compared to a closed system like a building or other confined space. Hotshot leader Eric Marsh, played by Brolin, alludes to this, telling new recruits to Granite Mountain to enjoy the Arizona scenery; they’ll never see it again after completing their training. All they’ll see is fuel—not trees—as well as terrain that shapes how a fire will spread and how it can be attacked. Hotshots undergo a life-changing shift of perspectives.

News reporting on wildfires typically puts the accent on aircraft dropping water or fire retardant on a blaze. That approach exudes drama and makes for good visuals, and thus good news ratings. But it misleads. Only the Brave shows how life is for grunts trudging on the ground, who make up the main line of defense. They do a lot of digging and chopping. A chainsaw makes a better metaphor for battling a maelstrom outdoors than does a firehose or tanker aircraft. Hotshots concentrate almost exclusively on starving a fire of fuel, whether by removing vegetation from its path, digging lanes that act as firebreaks, or carrying out controlled burns to eliminate fuel preemptively. They create their own barriers to prevent a conflagration from spreading.

Much like soldiers or marines, firefighters like Granite Mountain grow adept at judging weather, terrain, and vegetation, which make up their battlefield against wildfires. Hills and mountains channel a fire. Creeks and rivers make useful natural firebreaks. And so forth. Areas free of combustibles make “bombproof” safe zones. Team leaders use implements such as Google Maps to identify places of refuge in advance, before they join battle against a blaze. The results could be fatal if they fail to envision the endgame before embarking on a fight.

Weather is erratic and potentially pernicious for firefighters. Sean Flynn depicts thunderheads as a particular menace. They release cool air that descends and undergoes conversion into high-velocity, horizontal “outflow winds” as it collides with the earth’s surface. A downdraft can produce a sudden, abrupt change in a fire’s pathway, as indeed happened at Yarnell Hill—cutting off the Granite Mountain hotshots from their designated safe zone. This makes for a mercurial operating environment. Firefighting may not be warfare in the traditional sense, but fire has an uncanny way of acting like an enemy. It’s unpredictable.

And then there’s the human factor, replete with chance and error as well as courage and skill. In the early going of the Yarnell Hill fire, two tanker planes mistakenly dropped flame retardant on Granite Mountain backfires, compelling the team to mount a direct assault on the fire. The wind changed, the fire outflanked them, and they had to attempt an escape. Human fallibility has grave consequences. And a mystery lingers about the fire, also relating to the human factor. For unfathomable reasons, Marsh ordered the team to cut their way through a canyon full of unburned fuel in an effort to reach the predesignated safe zone on a nearby ranch, rather than take a more roundabout but safer route. The fire overtook them during their attempt to reach safety.

Why did they do it? Some time after the fire the lone Granite Mountain survivor, Brendan McDonough, who was on lookout duty separate from the main body, told Flynn that the choice of route must have been a consensus decision. “Nineteen guys made that decision and took that choice,” opined McDonough. “That’s what people have to understand. You can’t force someone to do that.” One man might have lost his composure under extreme stress; it’s tough to imagine nineteen losing it. Presumably, we will never know for sure why the hotshots did what they did. An investigation into the disaster declined to lay blame. But it also failed to solve this enigma.

Only the Brave is a penetrating and often moving look at how human beings react when the elements turn hostile. Check it out.

James Holmes is J. C. Wylie Chair of Maritime Strategy at the Naval War College and a Nonresident Fellow at the University of Georgia School of Public and International Affairs. The views voiced here are his alone. He is now a 1945 Contributing Editor.

In this article:Firefighting, Only The Brave, Only the Brave Review, US Navy Fire, USS Bonhomme Richard