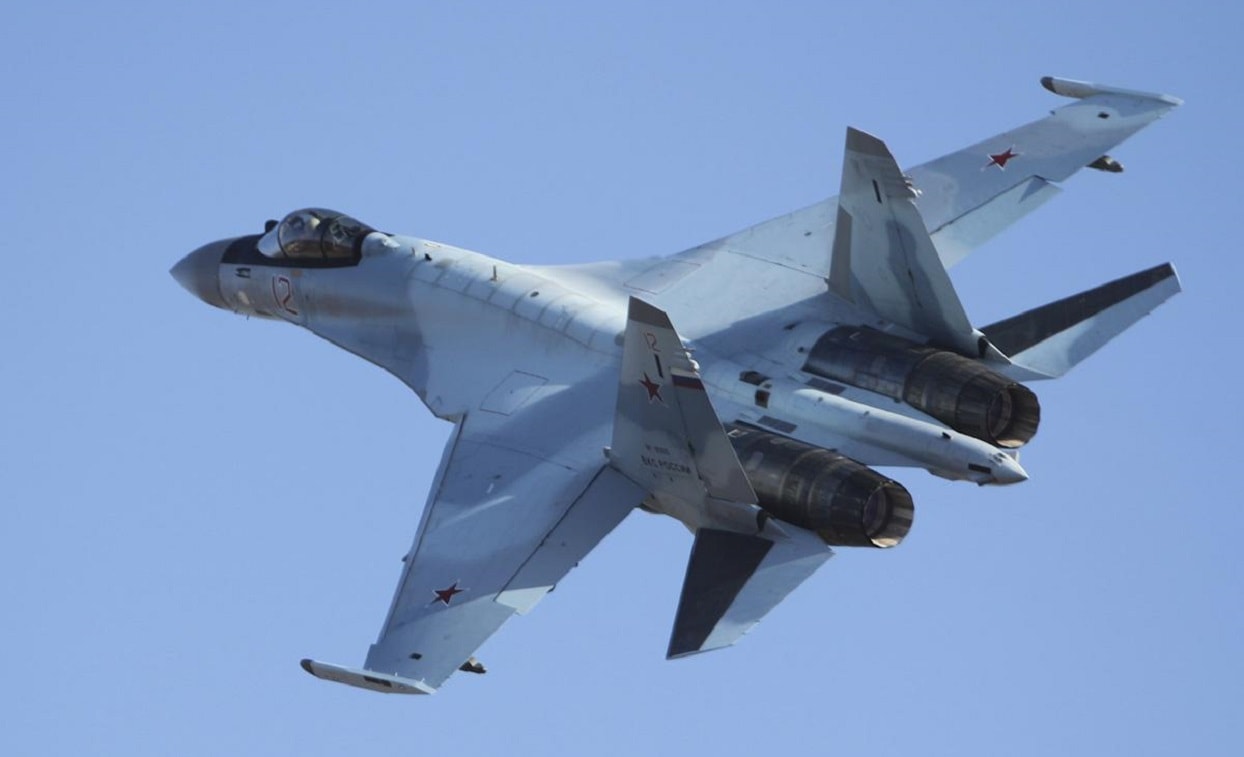 Su-35 Fighter, a Short History: Throughout much of the latter part of the Cold War, American fighter jets were largely seen to have an advantage when going up against whatever the Soviets could offer. That included the Su-27, which was introduced in 1988. In the past twenty years, that jet hasn’t seen nearly as much action as the American F-15. But the latest derivative of the Su-27 presents a real threat in the air.

The Sukhoi Su-35S is actually the second improved version of the Su-27M; it is a single-seat, twin-engine, supermaneuverable aircraft. These 35S versions feature thrust-vectoring engines in place of the Su-27’s canards. Designated the “Flanker-E” by NATO, this “4++ generation” fighter has proven itself to be a very capable foe to current U.S. aircraft, including the F-15 Eagle, the F-18, and even the F-35 Lightning II.

The Su-35’s armament includes a GSh-30-1 30mm autocannon with 150 rounds, along with 17,630 pounds of payload on twelve external points. It can carry a variety of air-to-air, air-to-surface, anti-radiation, and anti-ship missiles, as well as a number of TV, laser-, and satellite-guided bombs. By comparison, the new U.S.-built F-22 has just four hardpoints on its wings and three on internal weapon bays.

The twin Saturn AL-41F1S turbofans provide the Su-35 with maneuverability that can easily match or exceed the evasion techniques of nearly all existing fourth-generation fighters. With a maximum speed of 1,550 mph and a ceiling of 59,050 feet, it is a well-armed, speedy aircraft.

However, defense analysts have suggested that the Su-35 in its current modified configuration is really a stop-gap measure, at least until the Russian military is able to ramp up production of its fifth generation stealth multirole-fighter, the Sukhoi Su-57.

The threat from the Su-35 isn’t just in what the plane can do in the air, however. This is because the Russian Air Force isn’t the only operator of this advanced aircraft and what it could mean for regional power balances. In fact, the fighter was originally designed for export, but the Russian Air Force became the launch customer in 2009.

Both the Chinese People’s Liberation Army Air Force (PLAAF) and the Indonesian Air Force have placed orders—with the former receiving its initial delivery of four aircraft in 2016 followed by another ten in 2017 as part of a contract for twenty-four aircraft that Jane’s reported to be worth $2.5 billion. The Russian-Sino agreement also included support equipment and spare engines, with the contract to be fully implemented by the end of this year.

After China became the first international customer of the Su-35, the U.S. imposed sanctions on the Asian nation for breaching of the congressionally-mandated Countering America’s Adversaries Through Sanctions Act (CAATSA). Despite this, the Su-34 officially entered service with the PLAAF in April 2018.

Last fall, Turkey also began an advanced stage of negotiations to purchase thirty-six Su-35 from Russia. That move came after Turkey was ejected from the F-35 program and unnerved its NATO allies for purchasing Russian S-400 air defense missiles.

Several other nations have been listed as potential operators of the Russian-built aircraft include Algeria, Egypt, India and the United Arab Emirates. Though just a stopgap for the Russian Air Force, the Su-35 could be a serious disrupter of air superiority throughout the world.

Peter Suciu is a Michigan-based freelance writer who has contributed to more than four dozen magazines, newspapers, and website. He is the author of several books on military headgear, including A Gallery of Military Headdress, which is available on Amazon.com.