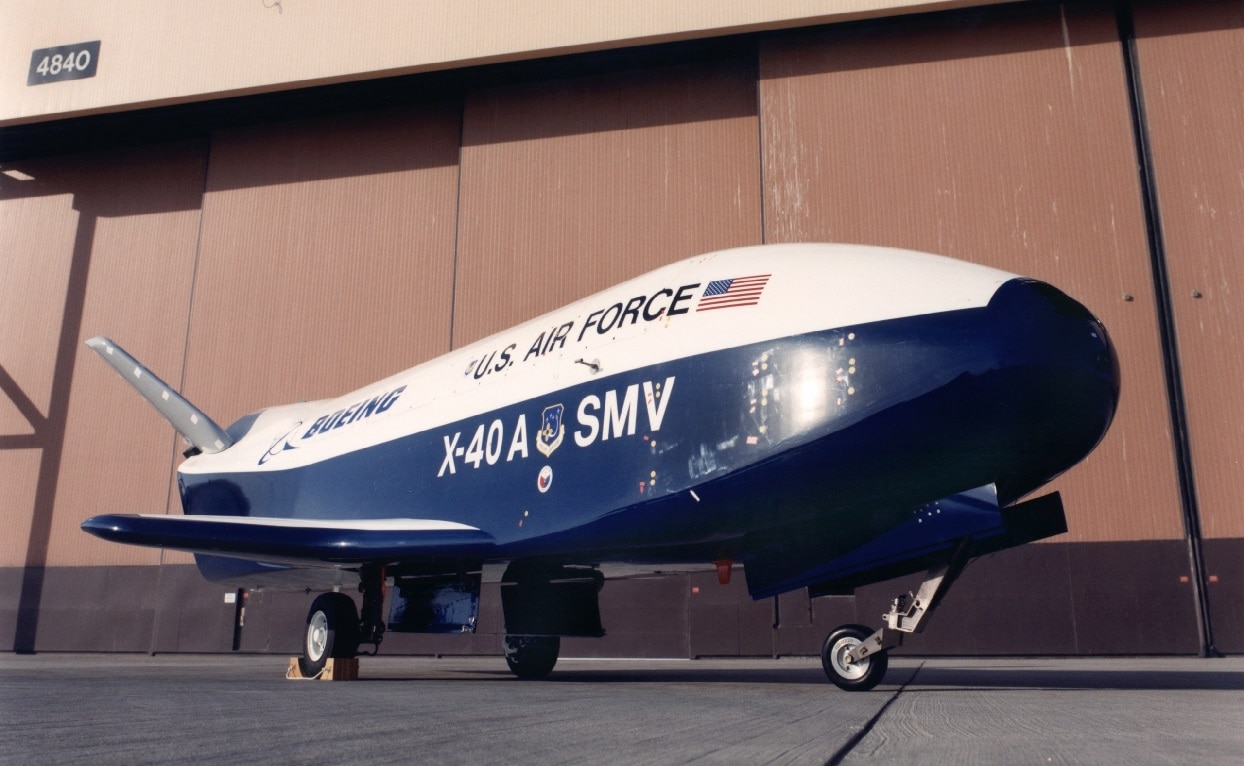 The Boeing X-40A, a 3 Minute History: Today only one X-40A test vehicle remains in existence, and it is in the collection of the National Museum of the United States Air Force in Dayton, Ohio. However, the program, which is now largely forgotten, proved instrumental in the development of the X-37B–the United States Space Force’s reusable space plane, which is currently conducting its mission in low Earth orbit.

I was able to get some insight into just how significant the Boeing X-40A was in the development of the X-37B from Darold B. Cummings, founder and president of ForzAero. Mr. Cummings holds thirty-six patents in a variety of fields. He worked in the design, analysis, fabrication and testing of air vehicles during his lengthy career.

“Up until the autonomous landing of the X-40A in 1998, no one had demonstrated that an unmanned space vehicle with such a low lift-to-drag ratio, and a high angle-of-attack landing attitude, could land safely,” Cummings told me.

“All the other key technologies, such as high-temperature materials and reliable propulsion systems, had already been demonstrated,” he explained. “The X-40A had to autonomously find the runway, account for wind gusts, and track a straight course down the runway centerline. The tiny wings on the X-40A required a high angle of attack to generate lift on landing, which meant the X-40A would rapidly rotate nose-down upon braking during landing. This required a very accurate onboard sensing system to provide an aerodynamically controlled gentle nose-down rotation to keep the nose from slamming down and collapsing the nose landing gear. This was all accomplished on the very first X-40A flight!”

The Boeing X-40A was not the first step in a reusable space plane, a concept that had predated the original Space Shuttle by decades. The experimental scaled-down aircraft was also just one part of the efforts to develop a reusable spacecraft that could be used in low Earth orbit missions.

Among the others was the X-34 unmanned space plane, which was designed to be a cargo resupply aircraft, much like the Space Shuttle.

“Unfortunately, that program was canceled in 2001,” said Cummings. “The latest air vehicle related to a Space Shuttle replacement is the Sierra Nevada Corporation ‘Dream Chaser,’ which is currently a piloted aircraft like the original Space Shuttle. NASA has supplied funding for the Dream Chaser, and an unmanned version is planned for the future that would land autonomously like the X-40A.”

One key point about the X-40A that Mr. Cummings would like to set straight is a longstanding myth that the unpiloted X-40, which was, in fact, built to 85% scale of the X-37 to test aerodynamics and navigation systems, utilized a drag or drogue chute.

“The Space Shuttle had a large drogue parachute that slowed the aircraft down, and also provided a stabilizing force to keep it straight down the runway,” noted Cummings.

“The X-40A did not have a drogue chute–the parachutes on the back of the bulkhead were there in case the X-40A lost control or lost radio contact during the flight test: the parachutes would deploy, and the X-40A would land on deployed airbags,” said Cummings. “Wikipedia incorrectly claims the X-40A deployed drogue chutes on landing. (Instead), all speed and control on the ground during landing was supplied by differential braking of the main landing gear.”

In addition to his work on space plane technology, Cummings previously worked on the YF-23 Stealth Fighter, a fifth-generation, single-seat, twin-engine stealth fighter designed for the United States Air Force in the late 1980s as part of the American Advanced Tactical Fighter (ATF) challenge.

He offered his thoughts on how the development of stealth aircraft has taken on new importance given the current geopolitical situation as other nations–notably China and Russia–work towards developing similar capabilities.

“That is a big question because there are a significant amount of geopolitical issues involved,” explained Cummings.

“The problem of force projection for the U.S. becomes an issue of numbers,” he added. “As an example, the ability to penetrate the overlapping/interconnected Chinese defenses will become increasingly difficult with current limited U.S. stealth assets.”

For that reason, he said he believes that the future focus for the Air Force will be on “Force Multipliers,” such as stealthy, but lower-cost/semi-expendable, unmanned aircraft working in consonance with manned fighters.

“That is the current focus of the Air Force Skyborg program,” Cummings said. “I personally do not believe the U.S. will launch another manned stealth fighter program at this time but will purchase and continuously upgrade the F-35, and supplement it with stealthy unmanned aircraft.”

Our thanks to Darold B. Cummings for sharing his insight and knowledge about the Boeing X-40A and YF-23 programs.

Peter Suciu is a Michigan-based writer who has contributed to more than four dozen magazines, newspapers and websites. He is the author of several books on military headgear including A Gallery of Military Headdress, which is available on Amazon.com. This article originally appeared last month.