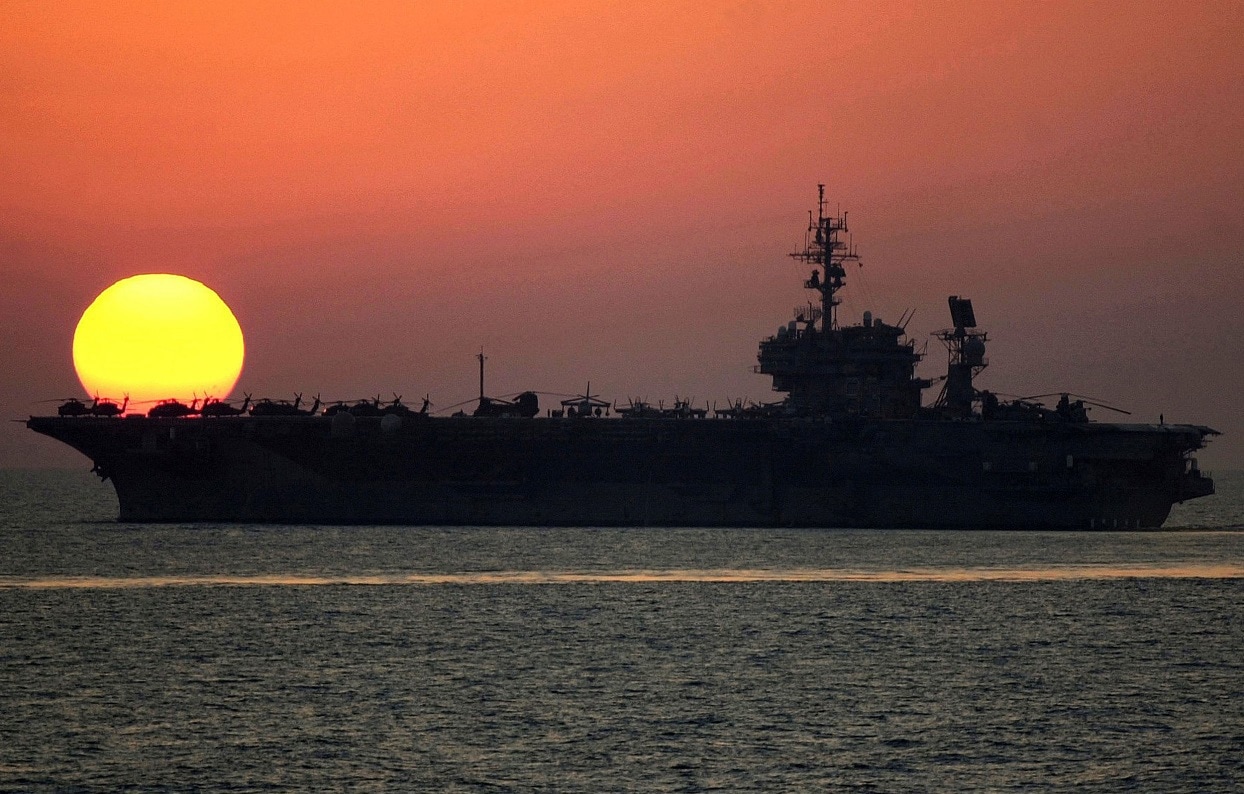 The lead vessel of the U.S. Navy’s last class of conventionally powered aircraft carriers, USS Kitty Hawk (CVA/CV-63) was commissioned in April 1961. The second naval ship to be named after Kitty Hawk, North Carolina, the site of the Wright Brothers’ first powered flight, from 2008 to 2012 she also had the distinction of being the U.S. Navy’s second-longest active warship after the sailing ship USS Constitution – and for her final decade in service she was the Navy’s forward-deployed carrier, based at Yokosuka Naval Base, Japan.

During her career, she participated in the combat operations in the Vietnam War, and took part in the invasions of Iraq and Afghanistan.

Design of the new class of aircraft carriers began in the 1950s with the goal of improving upon the Forrestal-class, the first completed class of “supercarriers.” Even larger with a displacement of 61,000 tons, and a length of 1,047-feet – USS Kitty Hawk would still be today larger than any other non-US Navy carrier in service today and only surpassed by the People Liberation Army Navy’s Type 003 carrier, which is now under construction.

Ordered on October 1, 1955, she was laid down by the New York Shipbuilding Corporation in December 1956, and launched in May 1960. Officially commissioned on April 29, 1961, she was entered service with the U.S. Navy just four years later from her official homeport at Puget Sound Naval Shipyard at Bremerton, Washington. However, she saw much activity from San Diego, and as noted later operated from Yokosuka.

Her conventional layout was in line with other U.S. Navy aircraft carriers constructed during the Cold War, but her design was meant to improve upon the previous Forrestal-class, including the placement of elevators to better accommodate the launch and recovery of aircraft. She was equipped with four launch catapults, a forward launch deck and an angled recovery deck that was fitted with arrestor wires for incoming aircraft.

Her initial armament consisted of 24 × Sea Sparrows and RIM-116 Rolling Airframe Missiles 3-4 × Phalanx CIWSs. USS Kitty Hawk could carry up to 85 aircraft, but the carrier air wing typically consisted of 70 aircraft in total – made up of interceptors/strike fighters, airborne early warning aircraft, transport aircraft and multirole helicopters. The tactical reconnaissance element in each of the carrier’s air wings was usually provided by a handful of Grumman F-14 Tomcats equipped with a digital TARPS (tactical airborne reconnaissance system) pod. The Tomcats were later replaced in all roles by the Boeing F/A-18E/F Super Hornet multi-role fighters and strike aircraft.

USS Kitty Hawk first saw combat actions during the Vietnam War and in the 1970s underwent a conversion program in which her designation was changed from CVA-63 to CV-63 as her strict “attack categorization” was dropped and she was considered a “multi-mission” vessel that included anti-submarine operations. She received new onboard systems and helicopters and was the first such vessel to utilize the CV designation.

The aircraft carrier was upgraded as part of the Service Life Extension Program (SLEP) from 1987 to 1991, and was deployed to the Western Pacific and even provided support to U.S. Marine forces in Somalia during Operation Restore Hope in 1992. After the terrorist attacks on the United States on 9/11, she was deployed to the Arabian Sea in support of Operation Enduring Freedom, and later supported the 2003 coalition invasion of Iraq during Operation Iraqi Freedom. In March 2008, Kitty Hawk completed her duties in the Pacific for the final time, and in January 2009 was the final conventionally powered U.S. Navy carrier to be officially decommissioned.

While there had been efforts to preserve the warship as a floating museum – possibly to be maintained alongside the former USS North Carolina in Wilmington, N.C., in October 2017 the Navy announced she would be scrapped. Along with her sister ship USS John F. Kennedy (CV-67), she was sold for just one cent to International Shipbreaking Limited – a sad end to America’s conventional carrier program.

In this article:Aircraft Carrier, NotHome, US Navy, USS Kitty Hawk