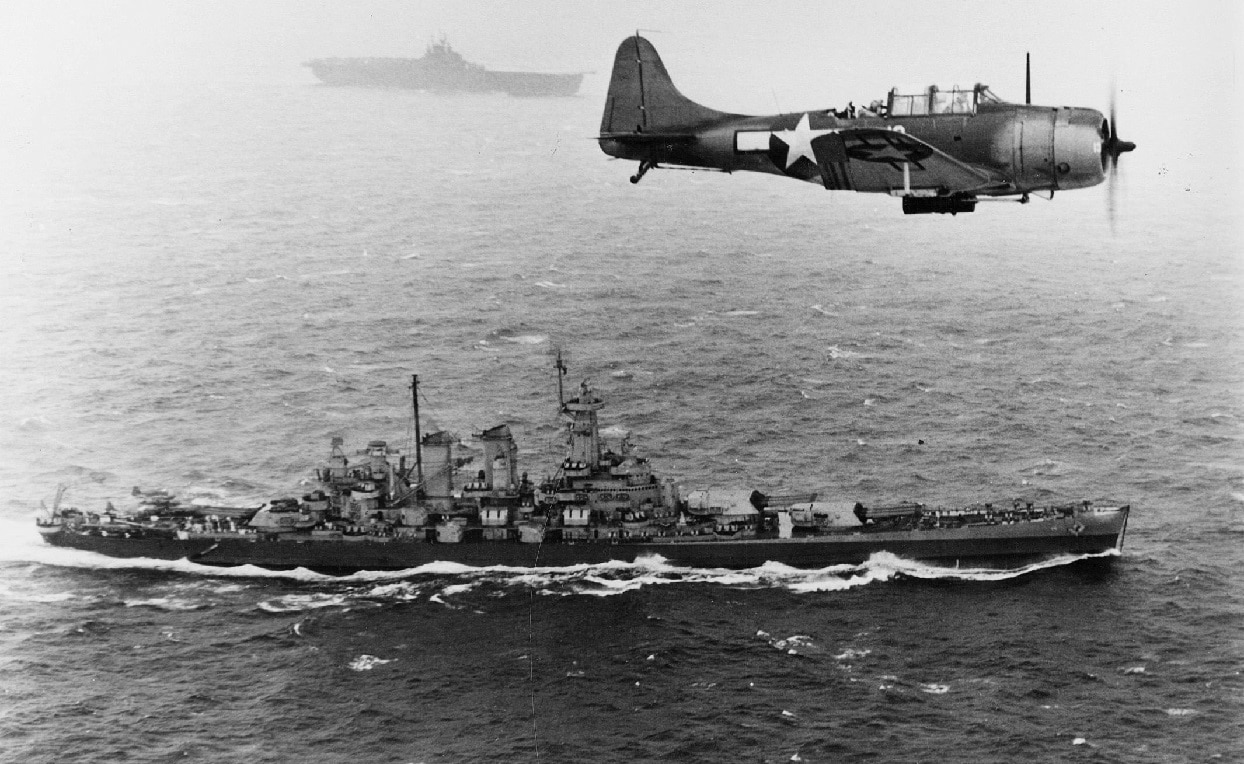 USS Washington, a 3 Minute History: During the Battle of the Atlantic during World War II, the British and Germans may have slugged it out with battleships and both nations can lay claim to sinking an enemy battle wagon. In the Pacific, however, only the United States Navy’s USS Washington (BB-56), the second and final North Carolina-class battleship, has the distinction of sinking an enemy battleship in “one on one” combat during the conflict.

It occurred on November 15, 1942 during the Second Naval Battle of Guadalcanal in the Soloman Islands. It was the first head-to-head confrontation of battleships in the Pacific war, and the decisive action helped blunt the Japanese counterattack efforts against the U.S. invasion.

Named for the forty-second state, she was laid down on June 14, 1938 at the Philadelphia Navy Yard, Penn., and launched on June 1, 1940. She was commissioned on May 15, 1941 under the command of Capt. Howard H.J. Benson. She was completing her shakedown and underway training when the United States entered the war.

She had frequently trained with sister ship USS North Carolina and the aircraft carrier Wasp (CV-7) with Washington serving as the flagship of Rear Adm. John W. Wilcox Jr., commander of Battleship Division (BatDiv) 6, part of the Atlantic Fleet. She was initially assigned to reinforce the British Home Fleet with CV-7, and during the journey through heavy seas a “man overboard” alarm was issued. It was revealed that Wilcox was missing, and while his body was soon recovered, the circumstances surrounding his being washed overboard have never been fully explained – the most popular theory is that he suffered a heart attack and fell. Wilcox remains the only U.S. admiral ever to have been lost overboard at sea from a warship.

The Pacific and Glory

After spending the spring and much of the summer working with the Royal Navy, USS Washington then underwent an overhaul and was sent to the South Pacific as part of Task Force 64 under the command of Rear Admiral Willis A. Lee, who was considered the Navy’s foremost flag-level expert on the integration and use of radar.

During the night action of November 14-15, 1942, along with the battleship USS South Dakota (BB-57) and four destroyers, Washington headed to Savo Island to be in a position to engage an approaching Japanese force that included the battleship Kirishima. When BB-57 was damaged and unable to continue the fight, it was left to Washington, with Capt. Glenn B. Davis commanding.

Washington single-handedly engaged the Japanese force, which included not only Kirishima but also two heavy cruisers, two light cruisers, and nine destroyers. Using her radar-directed fire, the American battlewagon pummeled the Japanese battleship with upwards of twenty hits from her 16-inch guns and more than forty hits by the 5-inch guns. Just after midnight, Kirishima was sunk along with a Japanese destroyer.

The rest of the Japanese force withdrew. It was the first, and only, one-on-one battleship kill of the Second World War.

USS Washington continued to operate in the South and Central Pacific throughout the war, and she took part in the invasions of the Gilbert Islands in November 1943 and the Marshals the following year. She also took part in operations in Palaus, Leyte, Luzon, Iwo Jima, and Okinawa. She was undergoing an overhaul when the war ended, but her final act was to transport American servicemen home from Europe.

The battleship was taken out of commission in June 1947 and remained inactive as part of the Atlantic Reserve Fleet until June 1, 1960, when she was struck from the Navy list. A year later she was sold for scrap.

However, her accomplishments during the Second World War can’t be overstated. She earned thirteen battle stars and saw action from the Arctic Circle to the Western Pacific.