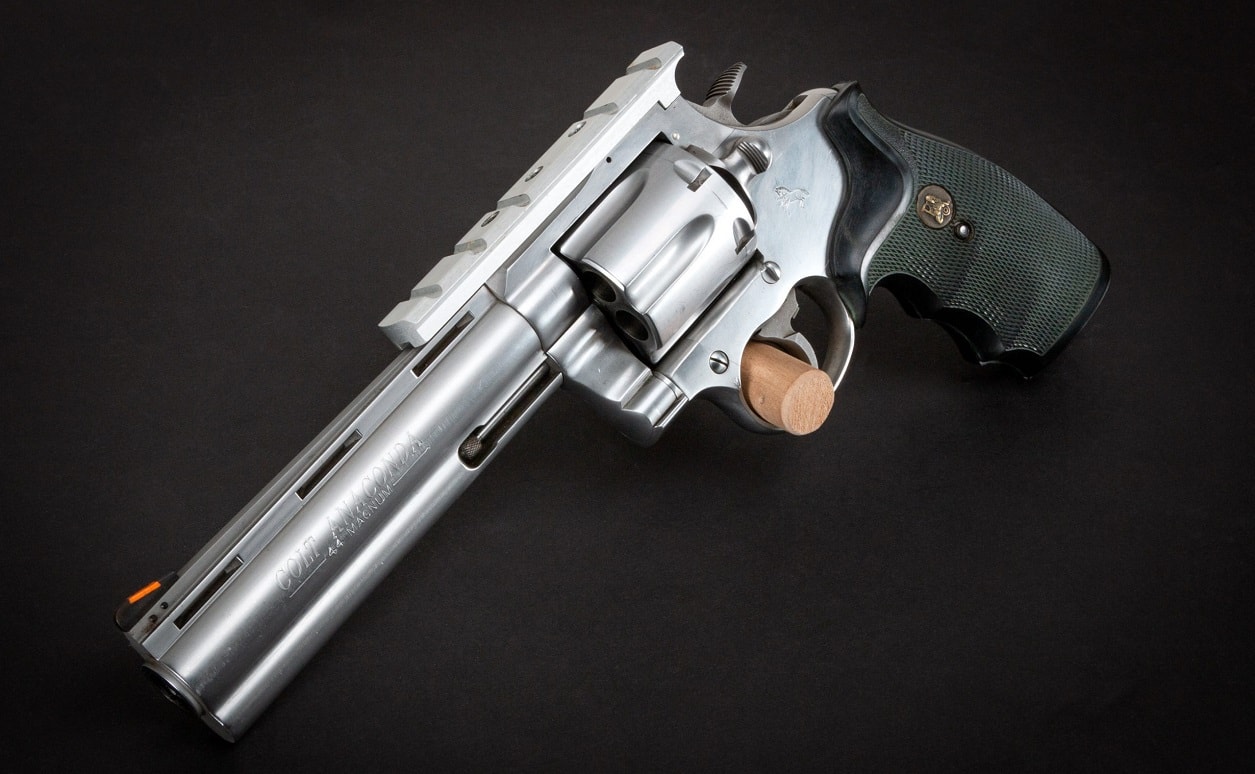 Colt Anaconda, a 2 Minute Review: It may have been the Smith & Wesson Model 29 that put the .44 Magnum in the public eye, but other companies sought to cash in the firearms communities’ love of big guns over the years.

But the true rival in the large frame double-action revolver to the Model 29 was the Colt Anaconda.

First introduced in 1990 – some thirty-five years after Smith & Wesson first released the Model 29 – the Anaconda was actually short-lived, and was discontinued in 2003. One factor was that the initial batch was plagued by accuracy issues. While it was resolved and resulted in one of the most accurate .44 Magnums in production, the handgun was too large for law enforcement general use or as a concealed carry.

There was also the fact that Dirty Harry carried a Model 29. Colt fired back in 1993 with a .45 Colt version but finally gave up.

Now, for 2021 Colt has revived its legendary “Snake Gun” lineup including the King Cobra, Cobra, and Python Series. The oversized redesign of the Anaconda features the company’s new Python action with an even beefier frame. The .44 Magnum revolver is available with both 6- and 8-inch barrels.

Other features include a leaf-spring action, recoil-absorbing Hogue over-molded grips – interchangeable with Python grips – and fully adjustable sights. The frame is also drilled and tapped for optics so it can be used by handgun hunters.

“The Anaconda is a legendary piece of the Snake Gun series and fills a unique space in the revolver market,” said Justin Baldini, product director at Colt. “Our team was dedicated to making this revival worthy of the Colt name while serving the needs of today’s gun owner.”

MSRP for both models is $1,499, which Guns.com reported is actually less than what vintage models have been selling for in recent years. Clearly that has caught the attention of Colt fans. Since its introduction last month, the Colt Anaconda has been among the top selling revolvers according to GunBroker. It is currently listed as “out of stock” on the Colt website.

Earlier this year it was announced that Colt Manufacturing, the company that helped popularize the revolver, was being acquired by the Czech-based Česká zbrojovka Group (CZG) in a deal worth about $220 million and 1.1 million shares of the Czech firm’s stock. The merger would allow CZG to expand its global customer base, but also increase its production capacity in the United States and Canada. CZG has announced that the Anaconda, as well as other firearms in the Snake Gun line will be made at the traditional Colt facility in West Hartford, Connecticut.