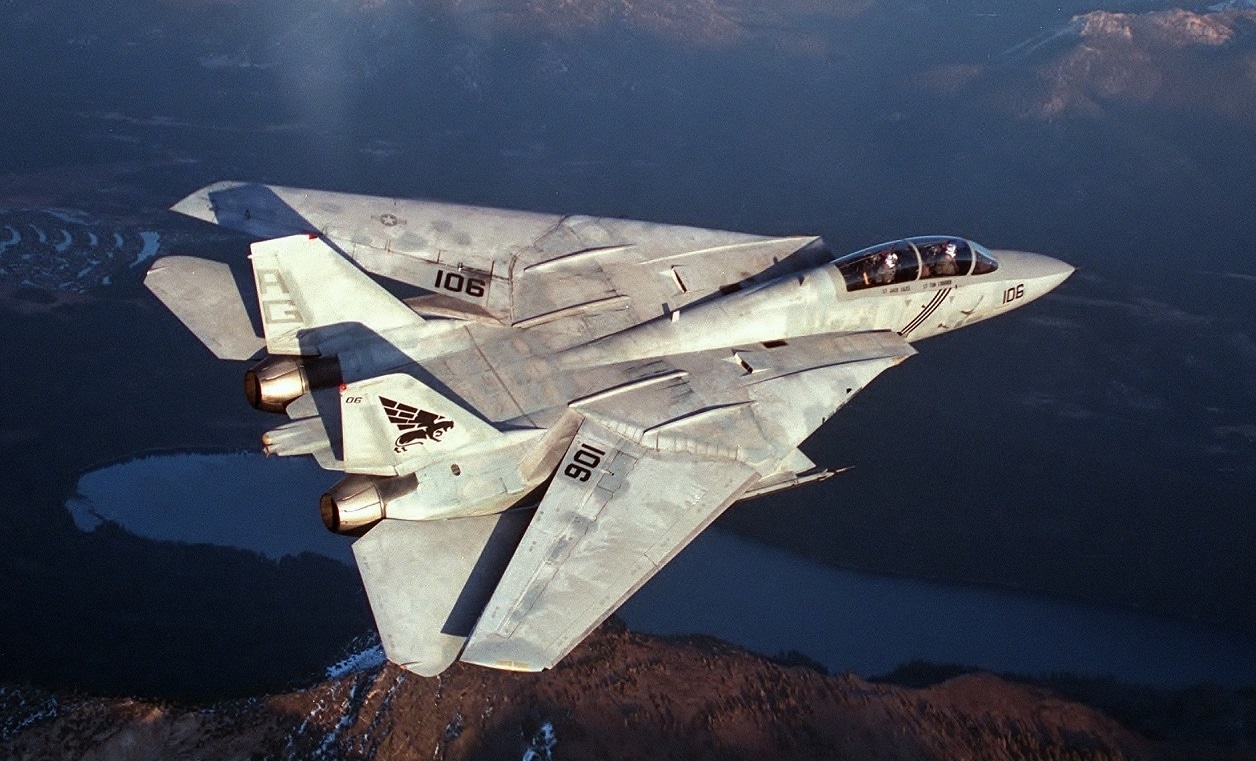 F-14 Tomcat, a 3 Minute History: During its three decades in service with the United States Navy the Grumman F-14 Tomcat more than lived up to the role, it was designed for, drawing blood in combat and even getting its moment in the spotlight in the film Top Gun. Designed to incorporate the air combat experience learned during the Vietnam War, the F-14 was the first of the American “Teen Series” fighters that included the F-15 Eagle, F-16 Fighting Falcon, and the F/A-18 Hornet.

The two-seat carrier-based multi-role fighter was developed after the United States Congress halted the development of the F-111B along with the Tactical Fighter Experimental (TFX) program. While the goal of that program was to supply both the United States Air Force and the United States Navy with the planes to fit each of their respective needs, the Navy was opposed.

Instead, the Navy called for a request for proposals for its Naval Fighter Experimental (VFX) program, which required a tandem two-seat, twin-engine air-to-air fighter. Grumman was awarded the contract in January 1969. The result was the F-14 “Tomcat” – named so partially to honor Navy Admiral Thomas “Tomcat” Connelly who had called upon Congress for the Navy to develop a carrier-based fighter.

The F-14, which made its first deployment in 1974, arrived as a supersonic, twin-engine, variable-sweep wing, two-place fighter that was designed to engage enemy aircraft in all weather conditions as well as at night. It was designed to track up to 24 targets simultaneously. The plane featured an advanced weapons system that includes a powerful Hughes AWG-9 radar, which used in conjunction with the Phoenix AIM-54A missiles, can pick out and destroy a chosen target from a formation at a distance of over 100 miles. Additional armaments include a variety of other intercept missiles, rockets, bombs and an internal M61A1 Vulcan 20mm Gatling-style rotary cannon.

With its variable-sweep wing the F-14 could match the speeds of other aircraft as needed – and for takeoff and low-speed flight, the wings would shift to the front, while for supersonic speeds the wings could tuck backward. Because of its versatility, it served as an air superiority fighter, fleet defense interceptor and even tactical reconnaissance platform.

The Tomcat drew its first blood in August 1981 during the “Gulf of Sidra incident,” in which two F-14s were attacked by a pair of Libyan Su-22 Fitters. Both Fitters were shot down, but the events would be replayed nearly eight years later when in January 1989 another pair of F-14s shot down two Libyan MiG-23 “Floggers” again over the Gulf of Sidra.

The United States Navy continued to rely on the F-14 throughout the 1990s and early 2000s, where it was utilized in strike escort and reconnaissance roles in Operation Desert Storm as well in Operation Deliberate Force and Operation Allied Force in the conflicts in the former Yugoslavia. The F-14’s final combat mission took place in February 2006 when two Tomcats were used in a bombing mission in Iraq.

While the F-14 was retired from service with the Navy, and supplanted by the Boeing F/A-18E/F Super Hornet, the Tomcat remains in use with the Islamic Republic of Iran Air Force. Only a handful of the planes, which were purchased by the Imperial Iranian Air Force in the 1970s, remain in operation but according to reports these aircraft have flown escort missions in Syria proving that even after nearly 50 years the Tomcat still has sharp claws.